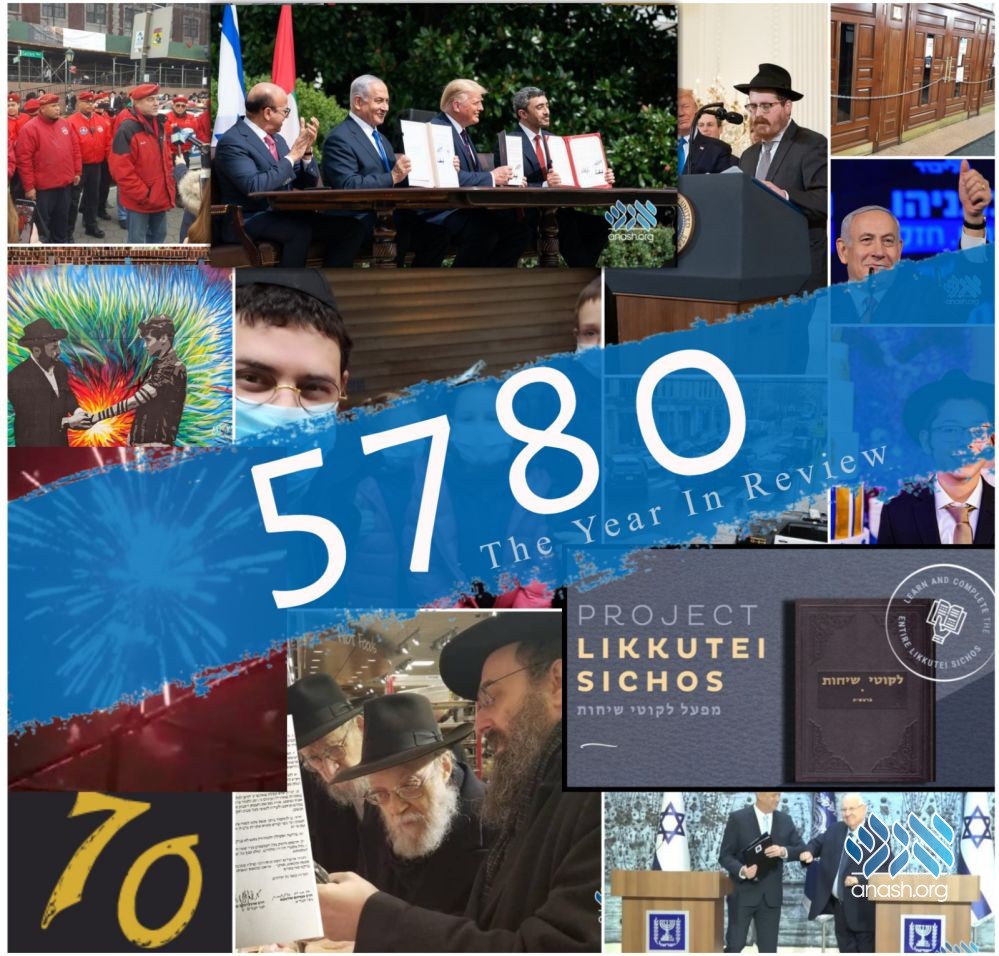 As we prepare for Yom Hazikaron, Anash.org remembers the tears and the joys, the hardship and hope of a year gone by.

5780 was off to a dramatic start when just two days after Yom Kippur, 770 was evacuated due to an electrical fire. A petition to expand the Lubavitch headquarters did not pan out, but the building did undergo some much needed repairs in time to prepare for Shnas Hashivim.

Tragedy struck in Kislev when two gunmen targeted a Kosher grocery store and killed two members of Jersey City’s chassidic community. Two days later, Rabbi Zvi Boyarsky stood up at the White House Chanukah party and thanked the president for signing an executive order against anti-semitism. Later that week, Moshe Holtzberg, who survived the attack on Chabad of Mumbai as a child, celebrated his bar mitzvah.

Over Chanukah, dozens of shluchim shared their unique menorah moments and hundreds of Anash.org readers submitted photos from their mivtzoim adventures. Unfortunately, on the seventh night of Chanukah, a Monsey shul was targeted in a stabbing attack. Within a few hours of the deadly assault, the Guardian Angels began patrolling the streets of Crown Heights. Undeterred by hate, over 90,000 Yidden gathered at MetLife Stadium for the Siyum Hashas, where Lubavitchers got to work doing mivtza tefillin.

To combat the darkness, popular Chabad artist Yitzchok Moully began painting inspirational murals in various cities. Another shliach utilized art to spread Yiddishkeit with his parody of the infamous $120,000 banana. Another light moment was shared when, following several widely publicized incidents of shluchim helping stranded travelers, Chabad was once again called on to save the day as passengers cheered.

By this time, news of a novel and deadly coronavirus sweeping through China had gripped the world, and all watched in amazement as the shluchim donned their masks and carried on. Soon, however, the danger escalated and many had to temporarily relocate.

Meanwhile, in Israel, a tefillin ban sparked a nation-wide tefillin resurgence. Bibi Netanyahu won the Prime Ministry after a third round of elections in one year; eventually, he and Benny Gantz succeeded in forming a unity government.

As Adar rolled in, murmurs about ‘the coronavirus’ turned into a full blown panic as new cases were reported and the first death on US soil occured. With much of Israel already in lockdown, JLI became the first Chabad organization in the US forced to cancel its highlight-of-the-year trip, with Tzivos Hashem’s chidon not far behind.

The days following Purim were characterized by confusion as people tried to make sense of new government rules and recommendations. The Crown Heights beis din and Hatzalah put out guidelines; 770 changed its schedule and added limitations before eventually closing its doors.

Schools in Crown Heights announced that they would remain open, then made an abrupt about-face as the seriousness of the situation became increasingly clear. The scene repeated itself in other cities, and by a week after Purim, all yeshivos and schools had shuttered their doors.

A team of Chabad medical professionals banded together to form the Gedaliah Society, and as the CDC put further limits on crowd size and the rabbanim ordered shuls to close, porch minyanim began popping up all over. Planned trips to Rostov were cancelled, but chassidim commemmorated the Rebbe Rashab’s 100th yahrtzeit with a virtual program streaming live from his ohel.

As Pesach drew near, tehillim requests began pouring in, and all too soon, the global anash community was thrown into mourning as beloved Crown Heights figures succumbed to COVID-19. In this time of great hardship and pain, the community found joy in putting everything aside and rushing to celebrate each with each chosson and kallah from their porches. Reports of miraculous recoveries were shared, and hope and faith were renewed.

As it became clear that schools would not be reopening before the year’s end, classes began moving online, prompting many to express concern over what the long term effects might be.

Shaken to the core by the death of Hannover Shliach Rabbi Benny Wolff, a group of his friends and colleagues arranged a global farbgrengen of historic proportions, during which Rabbi Berel Lazar pushed shluchim to make peace. In the following days and weeks, people who hadn’t spoken in years were inspired to extend the olive branch. Rabbi Lazar later contracted COVID-19, from which he has baruch Hashem recovered.

With the murder of George Floyd came a new wave of uncertainty as protests turned into riots and Jewish communities found themselves in the line of fire. As constant fireworks disrupted life in Crown Heights, children struggled with their disappointment over the news that overnight camps in New York would remain closed. Within days, however, camps had been arranged in Florida, Georgia, and Pennsylvania.

As American cities continued to burn, two Chabad houses were set ablaze. As the pandemic brought on a second wave of cases, Rabbi Yudi Dukes breathed on his own for the first time in months. As the divide in the country continued to widen, President Trump brought together Israel and Bahrain as part of an attempt to make peace between Israel and its Arab neighbors.

As we prepare to welcome in a new year, we ask Hashem to bring about the ultimate peace with the coming of moshiach, when the fires of destruction will be extinguished and COVID-19, along with all other illnesses, will be eradicated from this earth forever.