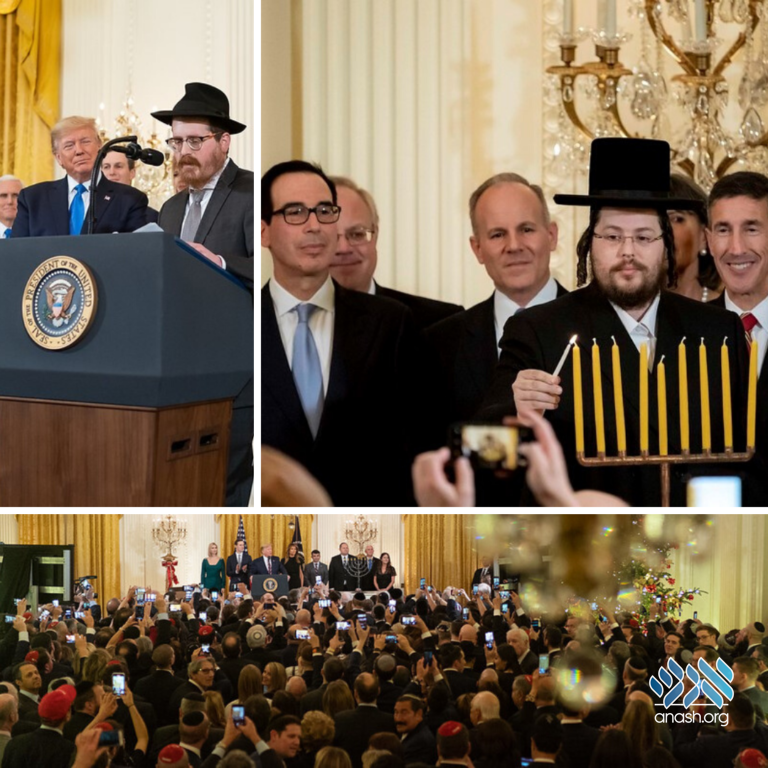 In a moving address, Rabbi Zvi Boyarsky of the Aleph Institute shared the Rebbe’s view on prison reform.

Chanukah came early at the White House this year. The annual celebration, which usually takes place on Chanukah itself, was held Wednesday.

Among those participating in the reception was California director of the Aleph Institute Rabbi Zvi Boyarsky, and director of the Tzedek Association Rabbi Moshe Margareten. Both activists played a key role in lobbying for prison reform through the First Step Act. Their efforts paid off when it was passed into law last year.

President Trump spoke about the miracle of Chanukah and what it represents. “Across the centuries, the Jewish people have endured violence and oppression beyond measure.  But no cruelty can overcome the might of your spirit, and no destruction can crush the eternal strength of your resolve.  And that is so true,” the president said.

Rabbis Margareten and Boyarsky stood near him on the podium throughout the reception, during which Rabbi Boyarsky was invited to address the crowd.

In his speech, he thanked the president for combatting anti-semitism, referring to the executive order that was signed at an earlier reception. He then led the crowd in a moving recital of the Shema in memory of the victims of the December 10 attack in Jersey City.

“The Hanukkah lights are symbolic of the flame of Godliness, the essential goodness embedded within each human being,” Rabbi Boyarsky said in his speech. “Back in the ’70s, the Rebbe, Rabbi Menachem Mendel Schneerson, called to nurture this goodness and allow its free expression also among those incarcerated in our prison system.

“The Rebbe advocated that, through good behavior and participating in educational programs, by demonstrating remorse and a will to lead a life of honesty and integrity, prisoners should be able to earn a reduced sentence and the ability to contribute goodness maximally to the world.”

“Mr. President, through the monumental FIRST STEP Act, you have helped countless worthy individuals reach their potential and share their unique divine light with the world — a long elusive goal.”

Following Rabbi Boyarksy’s speech, Rabbi Margareten lit the menorah, which was obtained by New York prison chaplain Rabbi Avrohom Richter. The menorah was made by inmates, and is used for lightings in the prison on Chanukah.