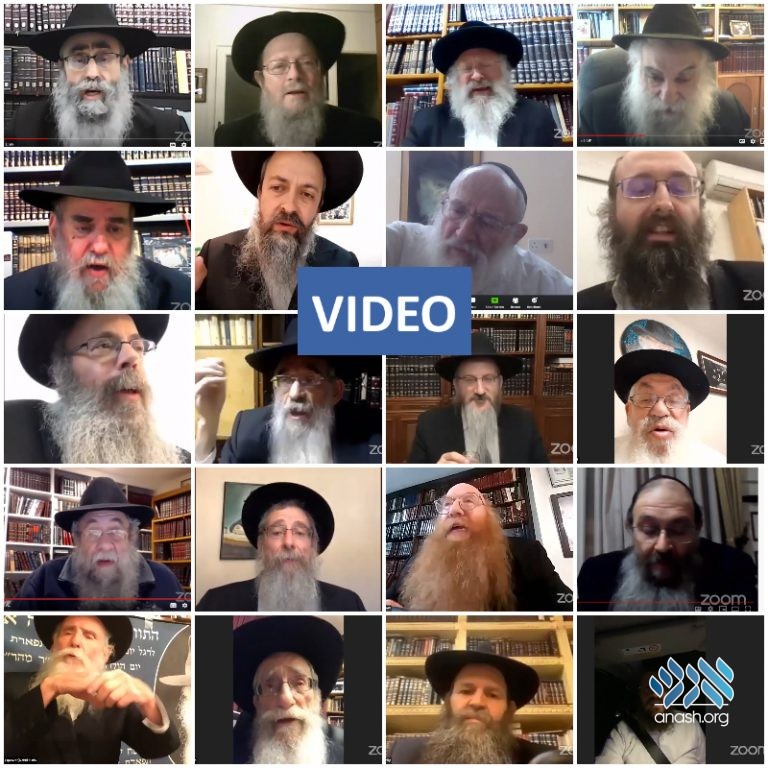 An online farbrengen lasting over eight hours and featuring many diverse Chabad personalities was joined by close to 30,000 anash from across the globe.

This past Motzei Shabbos, after hearing about the tragic passing of Rabbi Benny Wolff of Hannover, many of his friends gathered online to mourn and find comfort in each others’ virtual presence. The grieving friends expressed their disbelief that such a dedicated shliach and chassid was taken from his family and community in such a heartbreaking way.

During that farbrengen, Rabbi Berl Lazar expressed his emphatic belief that the coronavirus epidemic is a result of machlokes among our circles, and that achdus would help put an end to the tragedies in our community.

The following day, Rabbi Lazar organized a second virtual farbrengen to be held immediately following his dear friend’s levaye. He invited chassidim with differing positions on many issues to address the historic gathering. Despite suggestions to delay the farbrengen to give more time for word to spread, Rabbi Lazar insisted on holding it without delay, and appointed Rabbi Mordechai Weissberg to make the necessary arrangements.

On Sunday morning, Rabbi Wolff was laid to rest in Hannover. Rabbi Zalman Gopin later shared that though there had been talk of flying him to Eretz Yisroel to be buried, his wife insisted that he be buried in his place of shlichus. They went out on their shlichus together, she told the family, and their final return to Eretz Yisroel will be together, too.

At the levaya, the planned farbrengen was announced, and half an hour later, over 10,000 participants had joined the farbrengen which was being broadcasted on YouTube. Shluchim and rabbonim from across the globe – and across the spectrum – shared their thoughts and the sentiments felt so strongly at such a painful time.

Before the evening was over, they had also heard from Rabbi Shmuel Lew of London, Rabbi Zalman Gopin of Kfar Chabad, Rabbi Aron Ginsburg of Boro Park, Rabbi Zalman Lieberow of Flatbush, and Rabbi Zushe Silberstein of Montreal. By the time the final l’chaim was said, close to 30,000 people had joined the livestream.