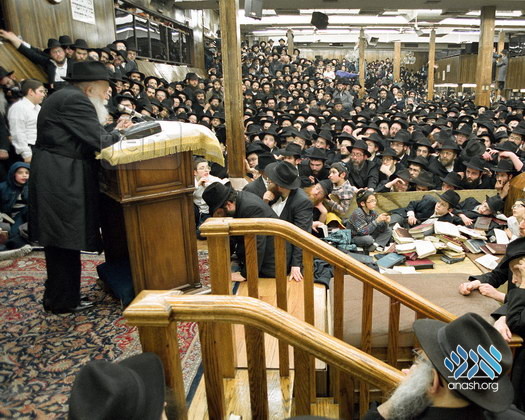 In 90 days, a tremendous milestone will take place. Throughout the Jewish world, the Rebbe’s influence is felt more than ever. The Rebbe’s Torah is more accessible than ever before. The Rebbe’s horaos and brachos continue to guide and enliven people around the world. And as this milestone approaches, Jews the world over and especially chassidim are preparing for a monumental celebration of this historic occasion.

“When a yovel arrives, we must remember the yovel. We must remember it, in order to act upon it.” With these words, the Rebbe launched the celebration of the 50-year yovel of the Frierdiker Rebbe’s nesius. These words inform each milestone celebration that chassidim are privileged to take part in.

In keeping with the Rebbe’s message, Vaad Or Vechom Hahiskashrus, a division of Iggud Hashluchim, has put months of work into planning a global campaign of hachana with communities around the world, which aims to galvanize anash to take part in preparing for this day. This past Sunday, rabbonim and communal leaders from ten of the largest anash communities around the globe took part in a conference call dedicated to finalizing plans for the global campaign to prepare for this great day.

“This is an opportune time for communities to gather as one and learn the Rebbe’s Torah,” said Rabbi Shimon Raichik, rov of Beis Levi Yitzchok in Los Angeles. “Together, we should recommit to following the horaos the Rebbe has given us.”

“As the very first anniversary of Yud Shevat approached, the Rebbe asked every chassid to bring at least 10 people closer,” said Rabbi Berel Lazar, chief rabbi and head shliach of Russia. Rabbi Lazar explained that this hora’a is something we can all take part in doing today.

“Each and every one of us can and must redouble our efforts over the next three months to do so,” he concluded.

And in the days that followed, the conference has already borne fruit. In Montreal, anash and temimim resolved to divide the entirety of Sefer Hama’amorim Melukat, Likkutei Sichos and Sefer Hasichos. In Paris, a conference call is planned on Sunday for local community leaders and activists, when they will implement similar hachanos. In Moscow as well, preparations for the anniversary are well underway. As plans to mark this milestone crystallize in additional communities, Vaad Or Vechom will continue to provide resources and other assistance to anash communities around the world.

In addition to assisting with local efforts, Vaad Or Vechom is preparing to announce a global campaign consisting of several projects uniting Anash communities worldwide, and they look forward to sharing more information about the campaign in the coming weeks. In doing so, they draw guidance from the Rebbe’s horaos for yovel celebrations.

Indeed, the Rebbe saw every yovel—decade anniversary as a time to reaffirm our commitment to the Rebbe’s nesius and mission. As detailed in the new Shivim Shana booklet published by Vaad Or Vechom, the Rebbe encouraged chassidim to reaffirm our commitment to the Frierdiker Rebbe’s mission and directives at each yovel anniversary of the start of the Frierdiker Rebbe’s leadership on Beis Nissan.

And just as the Rebbe celebrated the yovels of his Rebbe, chassidim celebrate the yovels of our Rebbe. On Yud Shevat in 5730, 5740, and 5750, thousands of chassidim gathered from around the world. The Rebbe marked each milestone and taught us that with the new decade must come a renewed striving to reach even higher.