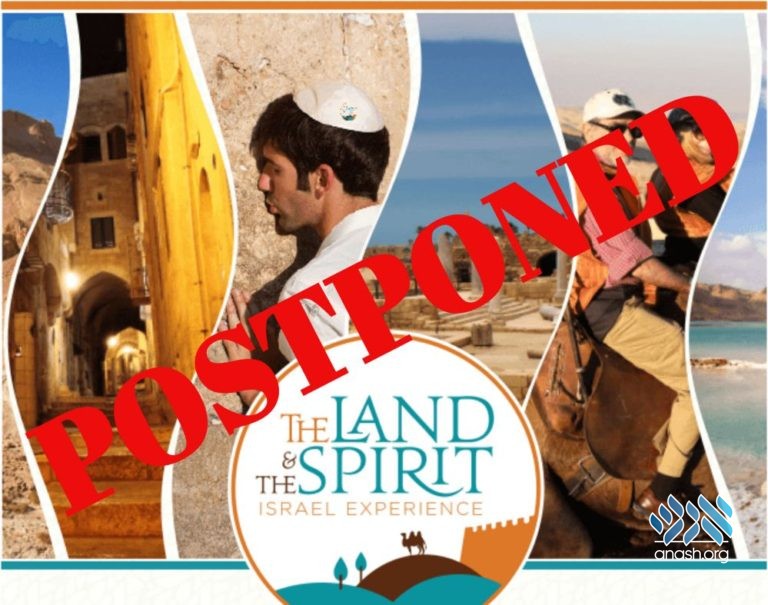 After working around the clock in an attempt to enable the March 16 trip to proceed as planned, the staff at JLI and Israel Maven have been forced to postpone for now.

Just two weeks ahead of JLI’s March trip to Israel, organizers conceded that despite their best efforts, groups traveling to Israel can not be guaranteed safety at this time.

‘The Land and the Spirit’ is a bi-annual eight-day immersive learning experience during which participants have the opportunity to see Israel’s sites and explore their intrinsic connection to the Holy Land. It is characterized by genuined Chabad warmth and spirit, and boasts participants from over 100 cities in the US, Canada and Australia.

In a memo to participating shluchim, the trip’s ‘steering committee’ explained that “there have been breaking developments overnight that make it no longer possible for Israel Maven to organize our trip.”

The decision was made following an incident where 30 buses went to visit Bethlehem and were not allowed entry back into Israel upon their return, due to the government’s concerns regarding coronavirus. They were not allowed off the buses, and could not go back to their hotels where their luggage was. They were forced to go straight to the airport.

“It was then that the staff at Israel Maven, who organized our tour and has been working closely with us in the past few days, realized that they could not vouch for our safety in Eretz Yisrael at this time,” Rabbi Mintz shared. “This is an unprecedented situation.”

The turn of events is not what everyone had hoped for, and there are many questions that JLI and their partners in this trip are working overtime to answer. They are committed to making sure that any monies that can be refunded or put toward the 2021 trip will be, and that the process will be as seamless as possible. They are also encouraging participants to reach out to the airlines they booked travel with to see what can be done.

“It is a difficult situaiton, but we are fortunate that it happened now,” one shliach pointed out. “It would have been far worse for all of us if we were in Israel, on that bus with our stuff in our hotels, not being allowed back in to the country. At least here, we are safe.”

At this time, most upcoming Israel trips, including those organized by Birthright and Masa, have been cancelled.