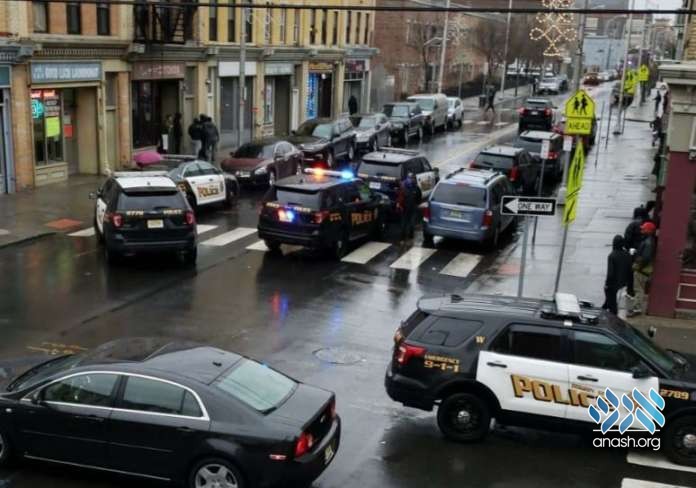 Four confirmed deaths at a kosher supermarket in Jersey City after a shootout on Tuesday afternoon.

RECAP OF EVENTS – LIVE BLOG BELOW

(YWN) A tragic incident in Jersey City has left the Jewish community in shock, as well as grieving members of law enforcement. We present a brief recap, followed by the earlier updates.

The shootings took place in the city’s Greenville neighborhood, both in the Bayview Cemetery and the “JC Kosher Supermarket,” located at 223 Martin Luther King Dr and a focal point of the Greenville neighborhood’s growing Jewish community. The store is located next door to a small, yet visible, synagogue, said Rabbi Shmuel Levitin, who directs Chabad Young Professionals of Hoboken and Jersey City with his wife Esta, and frequents the store.

Two suspects and three civilians are dead in addition to the police officer, a 40-year-old married father of several children.

Three of the victims are members of the local Hasidic community in Jersey City.

The incident involved two shooters, one man and one woman. Both allegedly arrived in a U-Haul van, dressed in black and carrying long guns into a Kosher supermarket.

Update 3:56 pm: Sources say that among the deceased victims inside the Kosher Supermarket are two members of the Chasidic community. Misaskim and Chesed Shel Emes are both responding to the scene.

Update 3:43 pm: Multiple dead reported in the Kosher supermarket. Their identity is unknown at the moment.

– It has been confirmed that a plainclothes officer has been shot dead in Jersey City at a cemetery in what appears to have been police operation gone bad.
– Shooters ran into Jewish-owned supermarket.
– One police officer shot and is stable.
– One Jewish man shot in stable condition.

Update 2:40 pm: Videos show one of the suspects being led away by the police.

Update 2:33 pm: The police confirm that the shooting is not an act of terror, but rather started as a criminal activity.

“We are closely monitoring the situation in Jersey City. At his time we have no direct connection or threat anywhere to NYC.

However, we are deploying extra coverage into the Jewish area to reassure the community of their safety. As more information becomes available we will keep you updated.”

JERSEY CITY, NJ, (YWN): Police officers were shot Tuesday in the Jersey City standoff that left a neighborhood, including a school, on lockdown, authorities said.

Sporadic, heavy gunfire rang out over the course of at least an hour along a major thoroughfare but has quieted down. SWAT teams, state police and federal agents responded to the scene, and police blocked off the area, which has a Catholic school, some stores, a kosher supermarket and a hair stylist.

FBI spokeswoman Patty Hartman said that more than one officer has been shot but could not give any other information.

“Our thoughts and prayers are with the men and women of the Jersey City Police Department, especially with the officers shot during this standoff, and with the residents and schoolchildren currently under lockdown,” Democratic Gov. Phil Murphy said. “I have every confidence in our law enforcement professionals to ensure the safety of the community and resolve this situation.”

Phones rang unanswered at several businesses in the area. Someone who answered the phone at the Catholic school, which runs from preschool through eighth grade, said all the children were safe as a lockdown continues. Police tactical teams were going through the school, according to scanner traffic.

Loud volleys of gunfire could be heard at regular intervals but subsided around 2 p.m. in the city, which is just across the Hudson River from Manhattan.

Dozens of bystanders pressed against the police barrier to film the action on cellphones, some whooping when gunfire bursts filled the air.

Andy Patel works at a liquor store about three blocks away from the site of the shooting site and said there had been consistent gunfire fire about an hour Tuesday afternoon.

“I can hear the gunshots. It’s like firecrackers going off. They were shooting like crazy about an hour ago. Then it stopped for like 20 or 30 minutes. The cops were clearing everyone off the streets,” said Patel.

Jersey City Police said they had no information to provide over the phone on the shooting.

White House spokesman Hogan Gidley said President Donald Trump had been briefed on the shooting and was monitoring it.

The Bureau of Alcohol, Tobacco, Firearms and Explosives said it was responding. The New York Police Department sent emergency services personnel, and the forces counterterrorism unit was monitoring the situation.

Reports on social media say that a chassidishe yungerman from Williamsburg was shot in the stomach and transferred to a hospital. He is said to be in stable condition.

A second yungerman who was said to be missing was located and is safe b”h.