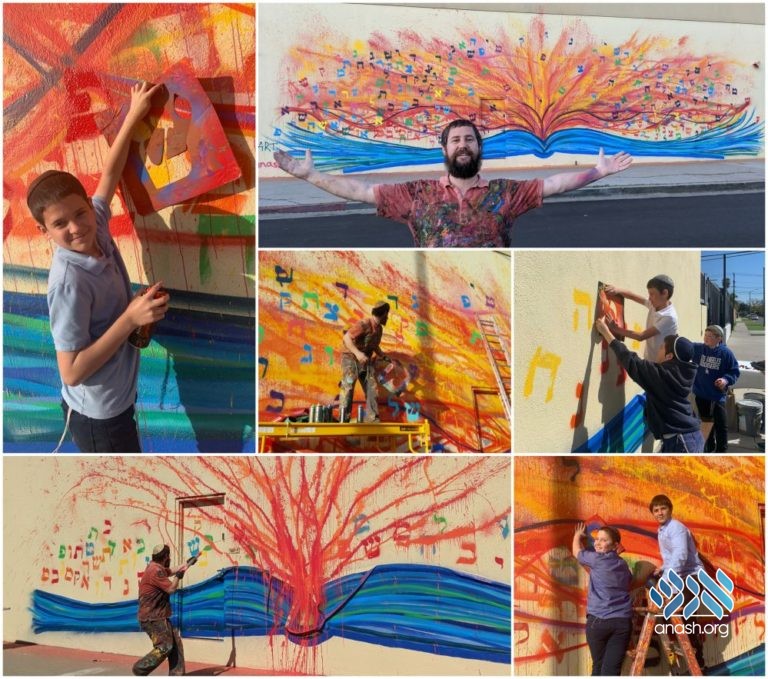 Artists Yitzchok Moully and Sheina Dorn got together with the students of Cheder Menachem Los Angeles to create an artistic wall. The result: a seventy foot wide mivtzoim mural right on La Cienega Blvd.

Pop-Art Rabbi Yitzchok Moully is always on the lookout for new opportunities to generate inspired displays of Yiddishkeit through the arts. So when he planned a trip to conduct several gigs in California, he reached out to Los Angeles based artist Sheina Dorn whose work he follows and admires. “Maybe we can collaborate on a mural,” he suggested. “Know any good walls available?”

Loving the idea, Sheina began to ask around about available walls. Several days into her quest, she was walking out of Cheder Menachem where she teaches specialty arts when it hit her: here was a giant wall, right on La Cienega Blvd, belonging to the school that employed her as an art teacher!

Rabbi Mendel Greenbaum of Cheder Menachem took to the idea, and soon the logistics were set. The artists got to work sketching out the concept, basing it on the Rebbe’s mivtzoim of Chinuch and Limud Hatorah. The concept they went with closely resembled Dorn’s sketch, which incorporated Moully’s abstract style into its design.

“It’s a sefer, it’s a siddur,” Dorn told Anash.org. “It’s the children’s davening and learning coming alive, visually exploding from the pages. The nachas Hashem gets from this is put into this picture of the letters flying up. It’s very powerful.

“I personally feel this when walking around Cheder. When I’m doing art, I hear the davening, them singing seder nigunim… it’s a very happy place, and a wonderful environment to work in. This mural represents Cheder Menachem perfectly.”

Dorn also works in the Bais Chaya Mushka building where she helps the students of Bais Rebbe middle school create their own inspired art. Around a month ago, one of the girls had the idea to take a bare wall and turn it into an artistic display. The result was a striking mosaic depicting the three mitzvos that are unique to Jewish women. Dorn and the girls finished this project just days before Cheder Menachem’s mural was created.

Before Moully and Dorn could begin painting, there were exhaustive preparations that needed to be made. Supplies needed to be purchased, a scaffolding needed to be obtained, and the wall had to be primed with a layer of paint. Finally, on Wednesday morning, Dorn created an outline of the Siddur using blue tape. Once the base of the mural was completed, the real excitement began.

“We used water squirters- the type that you pump out like a syringe- to create those splashes,” Dorn said. “We mixed water with paint, and squirted it straight up while running back and forth so that it would spray in the right direction, creating that fiery impact that you see in the mural; this is Moully’s signature technique. We had older students pushing us back and forth on a scaffold with no gate- it was fun, but scary!”

The artists also used spray paint to create clear, defined lines throughout the mural. Though Moully’s abstract, almost chaotic style is so different from her own, Dorn admits that it was exhilarating to just let go and let the process work its magic.

The students contributed by adding alef-beis letters, using spray paint and the stencils Dorn had created for this project. “This is the first thing the kids will see when they arrive at school every day,” Dorn said. “The carpool lane is right behind this wall, and they pass it every day when they come to school and when they leave.”

By the time the golden sun set on California, the mural stood completed in all its breathtaking beauty.

“We did the entire mural in one day, from start to finish,” Moully said. “I’m exhausted, but it was amazing.”

This project is part of Moully’s effort to create seventy ‘Chassidus in Color’ murals this year, ten of which he hopes he can put up in the Rebbe’s shchunah. “I’d like to get murals of all ten mivtzoim up in Crown Heights,” he told Anash.org. “There’s no shortage of walls, but getting permission to paint them is hard; I’m looking for partners in this project.”

For our N’shei photo gallery of Sheina Dorn with her fantastic art, click here.

To read Yitzchok Moully’s fascinating story and his words about art and chassidus, click here.