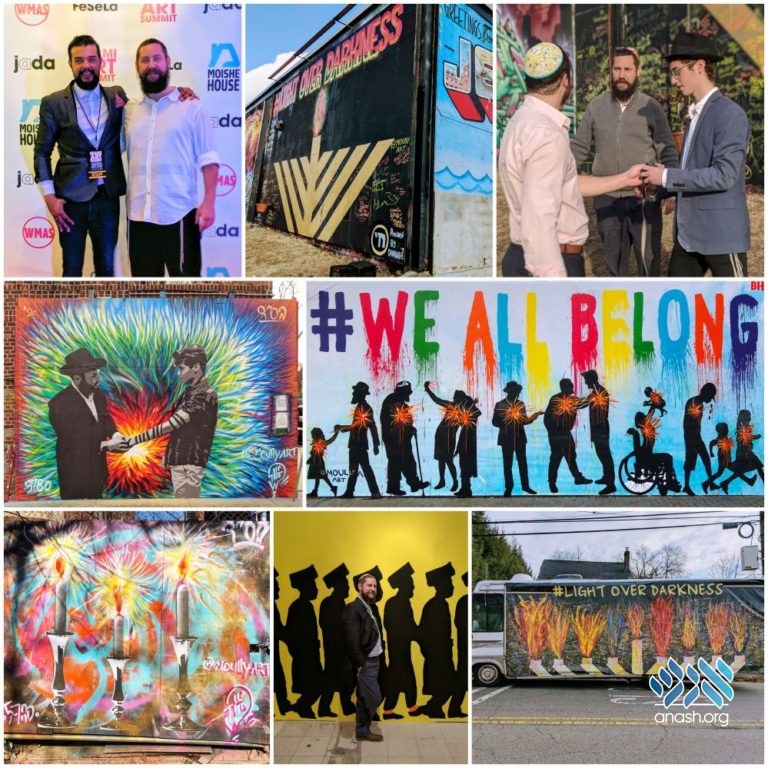 ‘Our People’ – New Anash.org feature: Pop-Art Rabbi Yitzchok Moully talked with us about chassidus through artistic expression, and the Rebbe’s instruction that changed his life forever.

A new Anash.org column puts the spotlight on the men and women who live in, work with, and inspire anash communities.

If you’ve walked through the Crown Heights streets in the past few weeks, you may have noticed a peculiar scene: a bearded Yid atop a ladder near a seemingly random wall, sporting paint splattered clothing and a gleam in his eye.

Of course, you’ll soon realize that the wall is not random and the brush-wielding character is not crazy- he’s a talented artist bringing the Rebbe’s mivtzoim to life across a colorful mural.

We sat down with ‘Pop-Art Rabbi’ Yitzchok Moully of Hillside, NJ to talk about chassidus through artistic expression, and the Rebbe’s instruction to his parents that changed his life forever.

Though Moully has a studio where he creates and sells his art, he is better known for his more public activities. He travels to shluchim where he conducts shows displaying his work, and workshops in which participants get to create something of their own. He has delivered his popular lecture -‘What’s a Nice Jewish Rabbi Doing Painting? – at Chabad Houses around the world, bringing home the message that everything a Yid does is with a higher purpose.

So, how did a nice Lubavitch Rabbi come to pick up a palette? The story Moully shares is as unique as the pieces he creates.

“I was born in Darwin, which is the capital of nowhere, Australia,” Moully quips. “In Tishrei of 1985, my family was on the way to make aliya to Eretz Yisrael, and through a series of Hashgacha Pratis, we passed through Crown Heights. My parents asked the Rebbe for a brocha on their upcoming move, and the Rebbe told them to stay; we ended up living in Crown Heights for the next several years.

“During those years, I went to Oholei Torah and Lubavitch Yeshiva. I came to 770 every Shabbos morning and would stand downstairs underneath Gan Eden Hatachton. When the door would open, the Rebbe would come out and say good Shabbos to each one of us kids standing there. I sat underneath the Rebbe’s feet by farbrengen, received kos shel brocha and dollars. I was there Hei Teves and Chof-beis Shvat… these were incredible times.”

After four and a half years, circumstances changed and the family moved back to Australia; by then, however, Moully’s life was on an entirely different path from what it had been when they left.

“Before we came to Crown Heights, we were newly minted baalei teshuvah on our way to a religious kibbutz; had we not stayed, I’d have grown up to be a great surfer. I probably wouldn’t be married, with kids, frum- I’d be chasing that elusive wave.”

When reflecting on the Rebbe’s instructions to his family, Rabbi Moully couldn’t shake the feeling that the Rebbe had personally plucked his neshomo from the trajectory it was on for a purpose. For years, he thought that purpose was expressed in his work as a youth shliach in Basking Ridge, New Jersey.

“After I committed myself full time to sharing Yiddishkeit through the arts, I began to feel that this is what the Rebbe wanted for me in the first place. Each of us has a mission that can not be fulfilled by another person; this is mine.”

When asked what a typical day looks like, Moully insists that in this line of work, there is no such thing. “A typical day starts with learning, carpool, and shacharis,” he says. “Then it’s whatever comes at me- traveling, working in my studio, looking at my upcoming deadlines. I have a very long laundry list of ideas I’m trying to get to.”

Moully’s work has him regularly traveling from home, yet he is mindful of the power of his presence when it comes to his family. “I’m there for dinner, I do carpool and bedtime- unless I’m on the road. I take one of my kids with me on my trips whenever possible, which enables them to become part of the shlichus.”

The Moully family has had opportunities to do things that they wouldn’t have otherwise done, the artist shares. His wife Batsheva and their six children have joined him on artistic RV excursions, spreading light and Yiddishkeit through the Tri-State area with a paintbrush. They’ve had the opportunity to join him at the Jerusalem Biennial Art Fair, and they are often part of his creative process. “We have conversations around the table where we throw out our ideas. Ideas are very central to the artistic process; it’s the chochma, which is then developed through binah.”

Moully has made himself a personal goal of creating 70 new murals across the country this year. These giant works will portray chassidus in color. This includes his current effors to put up ten murals around Crown Heights, each portraying one of the Rebbe’s mivtzoim.

“One of the things that inspired me was a farbrengen by Rabbi Yossi Paltiel around Yud-Alef Nissan. He talked about the timeline of the Rebbe releasing the 10 mivtzoim, and the effect it had on the world. The critical mass of Yidden doing mitzvos had an actual physical impact on the world. This idea really excited me. I created a body of work which conveys this idea of the power of the mitzvos through augmented reality.”

When asked about performing an artist’s work while leading a chassidishe life, Moully responds that creativity and self-expression are not a contradiction to Torah and Chassidus- “on the contrary! It’s chiddush, something that the Rebbe really pushed for. Creativity is an end in itself and a means to an end. It is a vehicle for my Yiddishkeit.”

“There’s a letter from the Frierdiker Rebbe to Henoch Lieberman in which he addresses the value of an artist’s calling,” Moully points out. “People ask me if I’m only allowed to create Jewish art; the answer is no, but I paint what I’m passionate about, which is my Yiddishkeit.”

In the above-mentioned letter, the Frierdiker Rebbe explains that for the true chassid, all aspects of life must be brought together in a larger harmony. The means of serving Hashem are varied, and they include the way of the artist.

From his end, Moully is happy that his children will grow up seeing the impact they can create when using their talents and passions to share Yiddishkeit and make a difference.