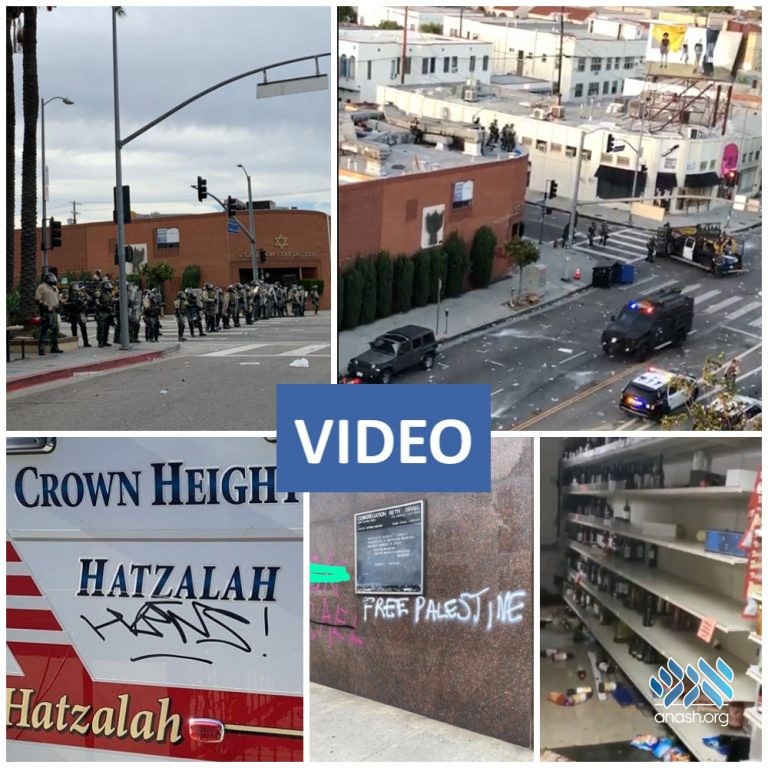 Multiple shuls and Jewish owned businesses were vandalized over Shabbos by street protesters in New York City and Los Angeles.

Nation-wide protests over the death of an unarmed black man at the hands of police in Minneapolis have descended into looting and riots, with many Jewish-owned businesses and even some Shuls being vandalized by the rioters.

Over the night a Crown Heights Hatzalah ambulance parked on Empire Boulevard was vandalized with graffiti.

In Los Angeles, Multiple shuls and Jewish owned businesses were vandalized with anti-Semitic graffiti over Shabbos.

Congregation Beth Israel, one of the oldest synagogues in Los Angeles, in the Fairfax District was defaced with graffiti stating “free Palestine” and other obscene language, as was the Kehilas Yaakov shul.

A Jewish-community activist said that as many as 75% of the Jewish-owned businesses in the La Brea area were vandalized last night.

In response to the riots, Los Angeles Mayor Eric Garcetti said that he’s seeking National Guard assistance as his city faces another night of rioting in response to the death of George Floyd. “This is no longer a protest, this is destruction. this is vandalism.” the mayor said.

While many other mayors have ordered curfews, New York City Mayor Bill de Blasio says there is, “no plan for a curfew” following three nights of violent protests.

The protests were sparked by the May 25 death of George Floyd, a black man who died after a Minneapolis cop was seen kneeling on his neck in a viral video. Chauvin has been fired and charged with third-degree murder, and the U.S. Justice Department is investigating the case.