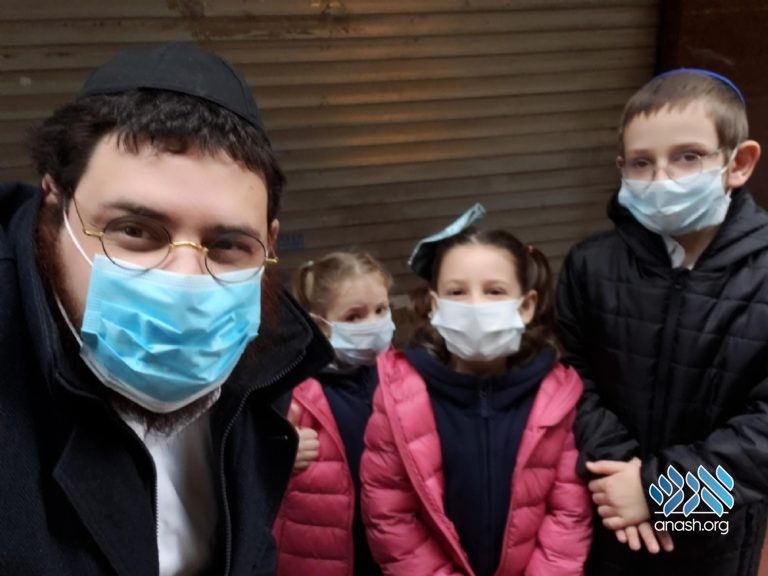 Chabad Shluchim are on the front line in China as fear mounts in face of the quickly spreading coronavirus and fatalities number in the hundreds.

Dozens of Chabad houses across China have been serving as clearinghouses for information and assistance for Jews in the country when the crisis hit, as tourists and businessmen tried to arrange flights out of China.

But as the situation grows worse and the fatalities mount, the world is isolating China completely, with flights to and from the country being stopped by airlines around the world and border crossings sealed. Soon, it will be too late to leave the country.

At least two Chabad Shluchim and their families have already left China, according to Chareidim10, one of them being Rabbi Dovi Henig, his wife Sarale and their children.

Rabbi Dovi Henig, Chabad shaliach in Chengdu, China, about an hour drive from the city of Wuhan where the center of the outbreak lies, left his home of eight years in China to return to Israel for a temporary stay. In an interview on Israeli Radio 103FM from Frankfurt, Germany on his way to Israel, he explained that he left because sakanas nefashos and pikuach nefesh supersede all other considerations. He said that almost everyone from his community of about 300 people have left, except about 12 people.

Hearing of the situation many of the shluchim find themselves in, the Government of Israel called an emergency meeting, where they decided to cover the costs of any shliach leaving China for Israel.

Rabbi Henig said he wasn’t worried about the two-week isolation period he and his family would face upon arrival to Israel, saying he’ll use the opportunity to spend quality time with his family.

Rabbi Henig was referring to Israel’s Health Ministry’s announcement on Motzei Shabbos that any Israeli citizens who have been in China or in contact with people from China in the last 14 days must remain isolated at home until at least 14 days have passed from the time they left China. Israel has also banned foreign nationals who have been in China in the last few weeks from entering Israel and have stopped all flights in and out of China.

Rabbi Shneor Cheruty, the Chabad shaliach in Shenzhen, China, was interviewed by Kikar H’Shabbos before Shabbos and didn’t seem to be overly worried about the situation. He said he and his wife and children are staying put but will act according to all the precautions recommended by the Chinese government.