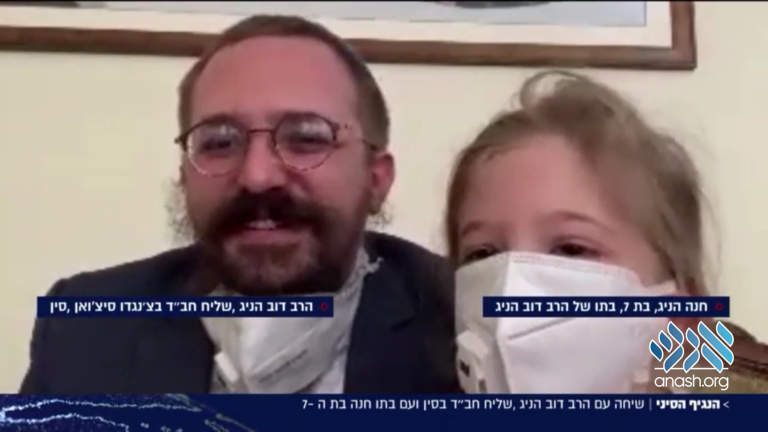 When 7 year old Chana Hoenig was interviewed together with her father on Israeli television, she declared that in spite of the nearby outbreak of the Wuhan coronavirus, she is not afraid.

Reporter Yaakov Ayalon from News 13 in Israel interviewed shliach Rabbi Dov Hoenig of Chengdu, China, along with his 7 year old daughter Chana. The father-daughter duo shared that in spite of the mass hysteria over the coronavirus outbreak taking place just one hour away from them, they are unafraid.

“It looks like Yom Kippur in the streets,” Rabbi Hoenig said. “There are no cars on the roads, there are strict regulations: there’s no school, no restaurants, no one is leaving.”

The Hoenigs live about an hour’s drive from Wuhan, where the actual outbreak occurred. Wuhan is now under complete lock-down, with no one being allowed to leave the city until they have been medically examined.

When asked if she was afraid, Chana responded that she is not- she attends the Shluchim Online School and does not need to leave the house.

“In the past eight years since we’ve moved here, it has never happened that there were not 70 to 80 people at the Beis Chabad,” Rabbi Hoenig said. “It is always bustling with activity. But this Shabbos people were afraid to come to shul and meet others. I hope it will pass quickly and everyone will be healthy.”