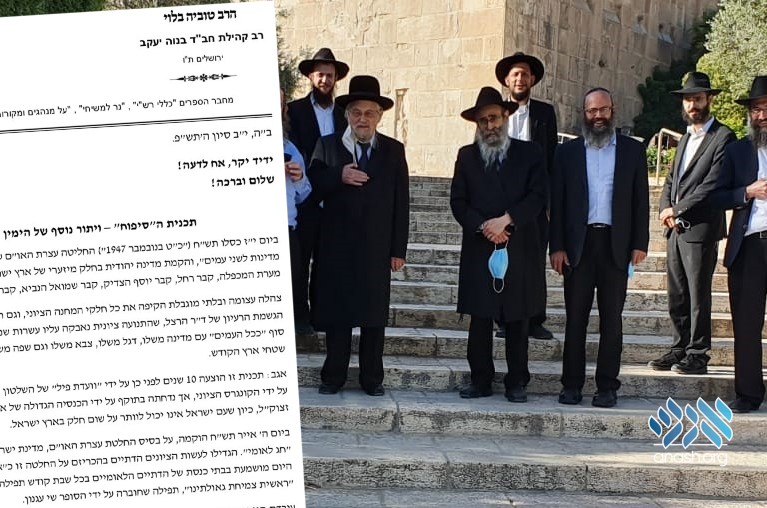 As the Israeli government debates President Trump’s ‘Deal of the Century’, representatives of Beis Din Rabbonei Chabad in Eretz Yisroel toured the city of Chevron to gain a first-hand understanding of the facts on the ground, and the danger the plan accords.

The annexation plan would see many areas of Yehuda and Shomron brought under full Israeli civilian control and away from the military government, but give Palestinians greater autonomy on the areas left under their rule. Additionally, critics say that the plan would exclude many of the smaller Jewish outposts.

Rabbi Menachem Mendel Glukowski and Rabbi Avraham Michoel Halperin, met with representatives of the local Jewish community Rabbi Hillel Horwitz, and Baruch Marzel, and were led on a tour of the city by Shliach in Chevron Rabbi Danny Cohen.

The visit began at the Ma’aras HaMachpela with a tefilla for Shleimus Haaretz, and for the health of Klal Yisrael worldwide during the Corona epidemic.

Throughout the visit, there was extensive discussion about the details of President Trump’s plan, and the Rabbonim heard of the many hidden dangers the plan presents to the Eretz Yisroel.

Rabbi Tuvi Bloy a senior Chabad Rov in Eretz Yisroel strongly criticized the Trump peace plan, comparing the misguided right-wing today to those who rejoiced in of the UN partition plan in 1947 which excluded the Kosel, Ma’aras HaMachpela, Kever Yosef, Kever Rochel from Jewish control

“The annexation plan, based on the Trump plan, is, in fact, a declared concession on most parts of Yehuda and Shomron and constitutes a continuation of the right-wings concessions at Camp David, the Disengagement (of Sharon and Netanyahu), and the Madrid Conference,” Rabbi Bloy wrote.

“The Rebbe led a war on behalf of Shleimus Haaretz and against even the slightest concessions and against any negotiations,” he wrote.

Heads of the Jewish community in Chevron said in response to the visit, “Those who remember the struggles during the Oslo Accords, the establishment of left-wing governments and the Disengagement plan, know that Chabad has been at the head of the fight, sometimes behind the scenes and sometimes on the front.”