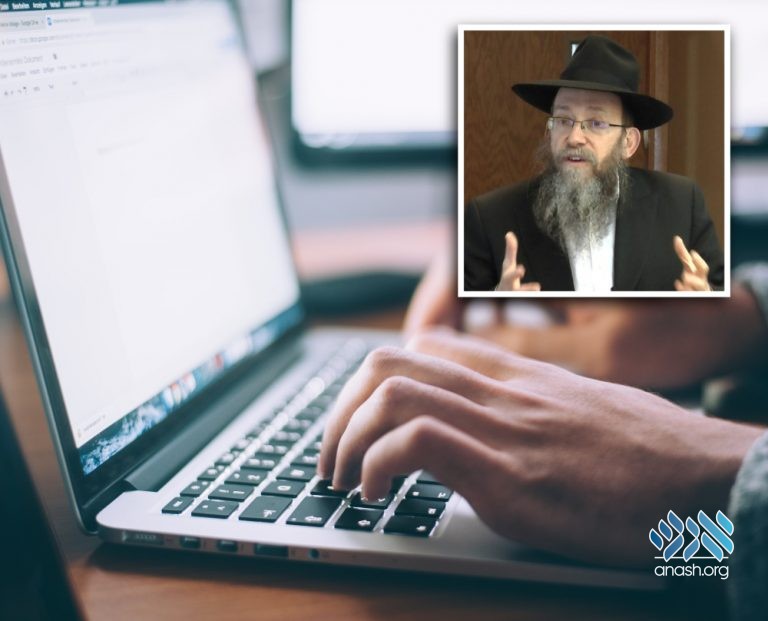 With schools out and the country cautiously beginning to look forward, Dr. Yosef Shagalow weighs in on how to handle the ‘internet issue’ in a post-corona world.

From an exclusive Anash.org interview with Rabbi Dr. Yosef Shagalow

As a clinical psychologist, I work with a lot of people in the Minnesota community where I live. As one of the first Lubavitchers to receive a doctoral degree in this field, I have had extensive experience working with the families of anash and shluchim all over the world; it is through this that I have become familiar with the issue of the internet, and the specific challenges it poses within the frum community. It’s a struggle across our generation, one that affects young couples, older couples, girls, bochurim – no one is immune.

It’s not my place to tell parents how much internet exposure their children should have. This is a decision that parents must make for their own family and household. The most important thing is that they are meaningfully involved in their children’s internet use, and really know what their children are doing.

Convincing ourselves of that is a mistake. Children get involved and addicted not because of who they are, but because of the nature of the internet itself. Without proper regulation and parents’ active involvement, kids will get addicted because it is created through design engineering. Millions of dollars are invested in creating a magnetic force that will keep children and adults coming back again and again, for longer and longer periods of time. Your child could be an excellent kid, but you are giving them something that is too powerful for them to handle on their own.

Over COVID, Zoom has become a normal part of our lives. Personally, I don’t think this is one of the internet’s big problems. In fact, it’s one of its healthiest uses, as it most closely mimics real social interaction. It’s a tool for people to get together, and a great way to see each other digitally. The other things out there are simulations that create a false sense of reality.

The problem with Zoom, however, is that it gives children access to computers and the World Wide Web. This is especially concerning when we consider the fact that our children are far better than we are at getting around whatever controls are installed. How much time is spent on Zoom is also a factor, as computer time itself can be addictive.

Simply put, the internet needs to be monitored in two areas: the content we are exposed to, and the amount of time spent on devices.

When school moved online, many organizations gave out devices that were set up to only allow Zoom. Unfortunately, even with those controls in place, kids were able to find ways around it. The fact that I’m hearing about this means that this has been disrupting kids’ lives, even if many aren’t aware of it.

Most parents don’t have the expertise needed to effectively set up devices for safe internet use. This is where TAG comes in – this is exactly what they do. Have a conversation with them, ask them what you should be doing and they’ll help you.

At the same time, none of these measures are going to work if our game plan is to let a tool educate our children. We can talk all day about filters, but it is of utmost importance that we speak to our children and cultivate a positive, open relationship around internet use. This isn’t a kid problem, it’s a person problem, and it helps to frame it this way. It has to be addressed as a struggle that all people share, and children need to see that these principles apply to everyone.

When we simply tell our children, “You can not use a computer or cell phone because the internet is dangerous for kids” or “We have to limit your time on devices because too much is not good for young brains’, we are training children to want it even more. That’s not chinuch! The concern and protectiveness around technology must come together with proper modeling from the parents, or it will mean little to the kids.

Some filters are good – Netspark and Gentech are recommended by Chabad mashpiim and professionals – but they aren’t the whole story. It’s not enough to download them; they need to be customized, and they’re not foolproof. Even the strongest filter is only as good as its user; these are things that need to come up in conversation with your children.

If you don’t know how to have this conversation, find a mashpia who is very familiar with this issue and ask them for guidance. If there’s already a problem and they pick up on it, you will need to seek professional help. If it’s about getting ahead of the game, however, mashpiim in many yeshivos can offer you valuable advice.

If a child suddenly becomes noticeably apathetic, angry or withdrawn, or you see a significant mood change, it’s often a sign that he or she has become dependent on the internet. It could be that this dependence is on devices in general, or chas veshalom that the child has become addicted to things that are unhealthy or inappropriate, which could have very damaging long term effects. Children need to be able to talk about it, but most won’t speak to their own parents. This is when it’s time to get a frum psychologist involved – a professional who understands our values and can frame the issue within the child’s worldview.

One of the biggest mistakes parents make is that they are aware of the dangers of the internet, but they see their own children (or themselves!) as immune. “My son is a chassidishe bochur, my daughter could never get involved in things like that.” Unfortunately, it’s not uncommon for bochurim and girls to seem involved and normal on the outside while their souls are being robbed from them because of an internet addiction. Your children are NOT immune, nor are they too young to be ensnared in this dangerous web.

Some families did not have internet in the home before COVID-19 and brought it in so that their children could attend virtual classes. If the children were only using the computer for school, parents can have a gentle conversation with them to explain that it was brought in for a reason, and now it’s time to let it go. Even if the kids were using it for other things in addition to Zoom, it’s not impossible to go back. It’s never easy, but it can be done.

No one knows what a post-corona world will look like because we aren’t there yet. Perhaps Zoom will become a normal part of people’s lives, but that’s not a good reason to give a child or teenager a computer or cell phone! The internet should be used in the house, in open areas, with some level of supervision. Set it up this way now, as the healthy way to interact with technology. Make sure your children know (and can learn from your example) that this is not something we do in private. If the child has their own device, it should be clear that parents will also have access to it so they can keep an eye out for their children’s physical, spiritual and emotional safety. It’s not restrictive or intrusive, it’s common sense.

It’s going to be much harder to go back. This will never be a process of just saying no to your children – it must be about saying yes, which is harder than it used to be. Maybe in the past, parents were able to just turn off the computer and tell the kids to go ride their bikes, but today we need to be actively and positively engaged with our children.

We need to make sure our children have everything they need, that there is quality family time, and that we’re helping them find stimulating and productive alternatives to devices. When we take away the device, we need to replace it with something that nourishes their spirit. It is especially important that there be Zoom and device free times for the whole family, such as meal times and various family activities.

Sometimes people ask, “Shouldn’t I be concerned that if I don’t give them access they’ll look for it elsewhere?” Yes, of course this could be a pitfall. However, we don’t hand our children guns and say, “I’d rather you get it from me than obtain it some other way.” We try to keep powerful weapons that can hurt them out of their hands. If, however, you sense that a child is already involved and is getting internet access elsewhere, it’s better to make it available under your watch so you can teach him how to interact with it in a Kosher, healthy way.

It’s hard, but it’s absolutely possible when parents are committed to it. Remember, parents have a right and a responsibility to set the standard in the house. It requires positive engagement, healthy modeling and self-discipline, but if these are our values, we can most certainly do it.

Rabbi Dr. Yosef Shagalow is a clinical psychologist who specializes in DBT, family therapy, anxiety, addiction and severe mental illness. He can be reached at 612-998-5669 or by emailing drshagalow@gmail.com.