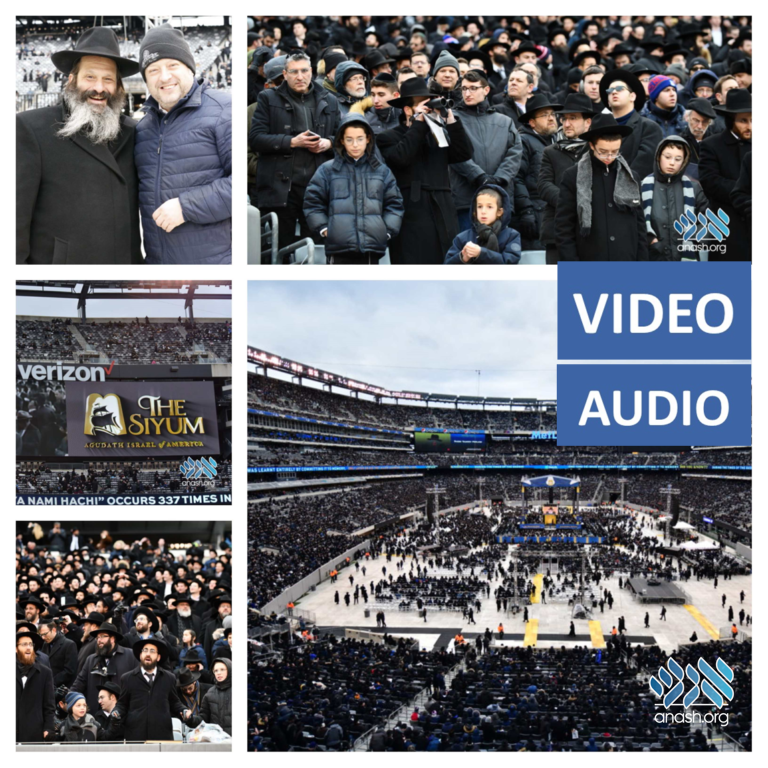 Over 90,000 people joined the Siyum Hashas celebration at MetLife Stadium in New Jersey today, marking the completion of the daily reading and study of one page of Talmud from the 2,711 set. The cycle takes about seven and a half years to finish.

Aside from the capacity crowd of over 90,000 at MetLife Stadium, live hookups included an overflow audience of over 10,000 at Barclays Center Brooklyn, NY and worldwide satellite feeds in 15 countries and 32 states.

While many of those in attendance come from the tri-state area, a significant number of participants flew in from all over the United States and other countries to take part in today’s historic event.

A bus left from Crown Heights as well, sponsored by Rabbi Dovid Fischer and the Smetana Foundation. Rabbis Chaim Itkin, Shmuly Chatzkelevitch and others came prepared with tefillin to don them on guests who are not yet frum.

Introductory remarks were given by Rabbi Chaim Dovid Zwiebel, executive vice president of Agudath Israel of America, who welcomed The Siyum’s many participants.

The momentous Siyum HaShas itself was recited by Rabbi Shmuel Kamenetsky, who recited the final passage of Shas from a World War II era Gemara and said the Hadran prayer, bringing thousands upon thousands of hours of study to a joyous culmination.

Mr. Jay Schottenstein, who dedicated the entire 73 volume ArtScroll Schottenstein Edition of the Talmud in memory his father, Mr. Jerome Schottenstein, said the Kadish prayer as a merit for the soul of Yaakov Meir Chaim ben Eliezer Hakohen.

Throughout the event, the Stadium erupted in enthusiastic song and dance, with participants expressing their unbridled, spontaneous joy and their unshakeable commitment to the study of the Torah and a life guided by its lessons, laws and values.

Some of the lively melodies sung were Lubavitcher tunes and the music was led by England’s Reb Shloime Gertner, Rabbi Baruch Levine, Reb Abish Brodt and Reb Shloime Daskal, the Shloime Dachs Orchestra, the Mezamrim choir and the Yingerlach children’s choir.

A poignant tribute was made to Holocaust survivors, and in memory of the 6 million who perished.

“Holocaust survivors, their children, grandchildren and even great-grandchildren were present at The Siyum, serving as the ultimate revenge against Hitler,” organizers said. “Their commitment to Torah study will keep the memory of the six million alive and they will be remembered here as they have at previous Siyums.”

The emotional Keil Malei Rachamim prayer for their souls was sung by Cantor Yitzchok Meir Helfgot who was joined at the podium by Holocaust survivors, with the Kadish prayer recited by Rabbi Avraham Schonberger in memory of those who perished. Reb Shloime Gertner led The Siyum in poignant song, the words sung by many on their way to the gas chambers, “Ani Maamin b’viyas haMoshiach, I believe in the coming of Moshiach,” linking the past, the present and the future.