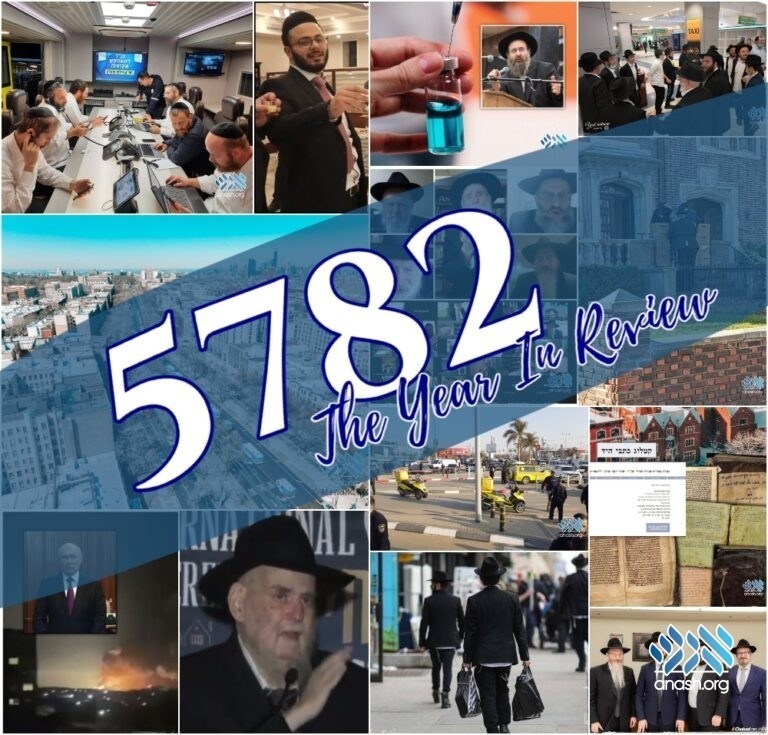 As we conclude the last moments of 5782 and prepare for the start of the new year, Anash.org remembers the tears and the joys, the hardship and hope of a year gone by.

While it seems like years ago, the start of 5782 continued as 5781 left off; with the coronavirus still on everyone’s mind. While in Crown Heights, large crowds once again poured into 770 for Rosh Hashana and Yom Kippur, in other locations across the globe, notably Australia, strict lockdowns were still in effect.

The celebrations in New York continued as Sukkos arrived, with Simchas Beis Hashoeva broadcasting live from Kingston Avenue, and record crowds turning up for Simchas Torah. Meanwhile, the Rabbonim of Crown Heights reminded locals and guests of the Rebbe’s clear position on an Eruv in the face of attempts to rewrite history.

After a month of Yomim Tovim, life began returning to “normal”, and Lubavitcher communities in the USA continued seeing incredible growth, including the success of newly established yeshivos. With Yud Alef Nissan – 120 years already on the horizon, an ambitious initiative to launch 1,210 mosdos was announced. As the vaccine debate began raging in full steam, Lubavitcher rabbonim in Eretz Yisroel and Crown Heights put out calls to follow the doctors’ advice and vaccinate.

After three years of delays, the Crown Heights community watched with bated breath as R’ Menachem Moskowitz‘s attacker was finally put on trial, and ultimately convicted.

Another welcome respite from the previous year and a half was the sight of shluchim once again arriving in Crown Heights for the Kinus. Joining them was the Chief Rabbi of Iran, who also utilized his visit to meet rabbinic leaders from across the USA. Highlighting the unique challenges of the pandemic, the Kinus also saluted the dedication of Rabbi Moshe Kotlarsky, who had recently overcome personal health challenges. And as per tradition, the Kinus concluded with the Grand Banquet, complete with the roll call and joyous dance.

The Jewish world was shaken up when a newlywed in Brooklyn discovered that her husband, whom she married under the purview of a local Syrian rabbi, was actually a Muslim from Beirut. The story raised more questions than answers and began a saga that is still ongoing.

A historic visit of the Gerrer Rosh Yeshiva to New York was the talk of the town for weeks, and while no official Chabad delegation paid a visit, activists greeted him at the airport and presented him with a unique memento.

A wave of terror in Eretz Yisroel hit close to home when a Lubavitcher bochur was murdered near the Kosel, and initiatives were launched in his memory. In Los Angeles, the loss of the community’s beloved rov left the global Chabad community feeling shocked, but the announcement of his son as his successor reassured many that his work will continue.

As Hey Teves approached, truckloads of books were returned to the Rebbe’s library after being restored from damage in the previous year’s flood, which also prepared for a historic dedication of a new wing. Right across the street, a high-stakes building on Eastern Parkway was purchased after unusual partnership between three yeshivos.

In Texas, a hostage situation at a Jewish center concluded with a happy ending, and a scandal involving a well-known author in Bnei Brak shocked thousands of his readers. With the omicron variant of the coronavirus made into a scare, the Kinus Hashluchos was changed to a “hybrid” event, with limited in-person programs and no Gala Banquet.

Scholars, researchers and chassidim around the world were exhilarated when the Central Chabad Library scanned and uploaded their priceless collection of manuscripts, with one scholar even discovering previously-unknown sections of the Alter Rebbe’s Shulchan Aruch.

A new initiative by the Badatz of Crown Heights aimed to raise the standard of chosson teachers, and 5,000 CTeens, shluchim, supporters and dignitaries gathered for a breathtaking display of Jewish pride in Times Square.

The entire world watched anxiously as Russia amassed troops on the Ukrainian border, and ultimately, despite prayers to the contrary, launched a full-scale invasion. Without a second of delay, shluchim across the country joined forces with their worried counterparts in USA, Eretz Yisroel and elsewhere to ferry as many Yidden to safety as humanly possible. As Kyiv was continuously bombed and cities captured one after another, shluchim escaped with their lives after ensuring that the maximum number of their congregants had made it to safety. Upon their arrival in Eretz Yisroel, New York or Miami, they were greeted by joyous crowds. Just a few weeks later, as Purim approached, some of the shluchim started heading back into Ukraine to assist the remaining Yidden.

Terrorists struck in Eretz Yisroel time and time again, bringing back scenes that many had hoped were long behind us.

As Yud Alef Nissan approached, preparations went into high gear to mark the Rebbe’s 120th birthday. Celebrations were held across the globe, with highlights including the announcement of the successful launch of 1,210 mosdos and a historic once-in-a-century 120 Mitzvah Tank parade.

Over the same month a controversial plan that put the future of the Rebbe’s mikvah at risk roiled Crown Heights, and in Eretz Yisroel, Bennet’s ‘Unity Government’ started to unravel. As thoughts turned to the new yeshiva year, new Chabad yeshivos were founded in Suffield, Connecticut, and Baltimore, Maryland, and a new vocational yeshiva in the Pocono Mountains.

Lag B’omer celebrations in Meron ended in disappointment after draconian measures were put in place instead of proper safety precations, while in New York a Siyum Harambam and Lag B’omer celebration closed off Eastern Parkway. The ongoing Russian offensive had 3 prominent Chabad figures banned from Russia, while many Ukrainian shluchim returned to their cities. With agitators pushing for the government to mix into yeshiva curriculum, frum communities stepped up to the plate to debunk misconceptions, speak out and let the government know of the overwhelming opposition to their plan.

A July 4th parade in Highland Park, Illinios, turned into a bloodbath when a gunman opened fire, bochurim who were doing mivtzoim nearby were unharmed. The local shliach later realized that the gunman had visited his Chabad House on Pesach.

As violence spiked across New York, antisemtic attacks in Crown Heights surged as well, with numerous concerning events taking place in close proximity to each other. Some good news arrived from Eretz Yisroel, however, with the announcement of the establishment of a new ‘Kfar Chabad’ style village.

The end of the summer brought an emotional Bonei Olam event to Crown Heights, the ordination of a shliach as the Chief Rabbi of Ecuador, and another round of renovations to 770.

Elul arrived, and with it a new yeshiva year. Russian shluchim gathered to declare that they weren’t going anywhere. After suspicious videos were captured of a kosher restaurant owner buying treif meat in Manalapan, NJ, the store’s hechsher was pulled and a firestorm erupted, leaving consumers wondering what they could do to protect themselves. The New York State Board of Regents arrogantly ignored tens of thousands of parents and voted to approve new regulations, signaling the start of a drawn out legal battle over religious freedoms and parental rights.

As the year concluded, chassidim began preparing for the new year, with a focus on Hakhel, and guests began streaming into New York to spend Tishrei by the Rebbe.

May we merit to welcome Moshiach while still in these last few moments of 5782 and forever remember this year as the year that the world was transformed into a place of everlasting peace and prosperity for all.

With best wishes for a Kesiva v’chasima tova to you and yours,