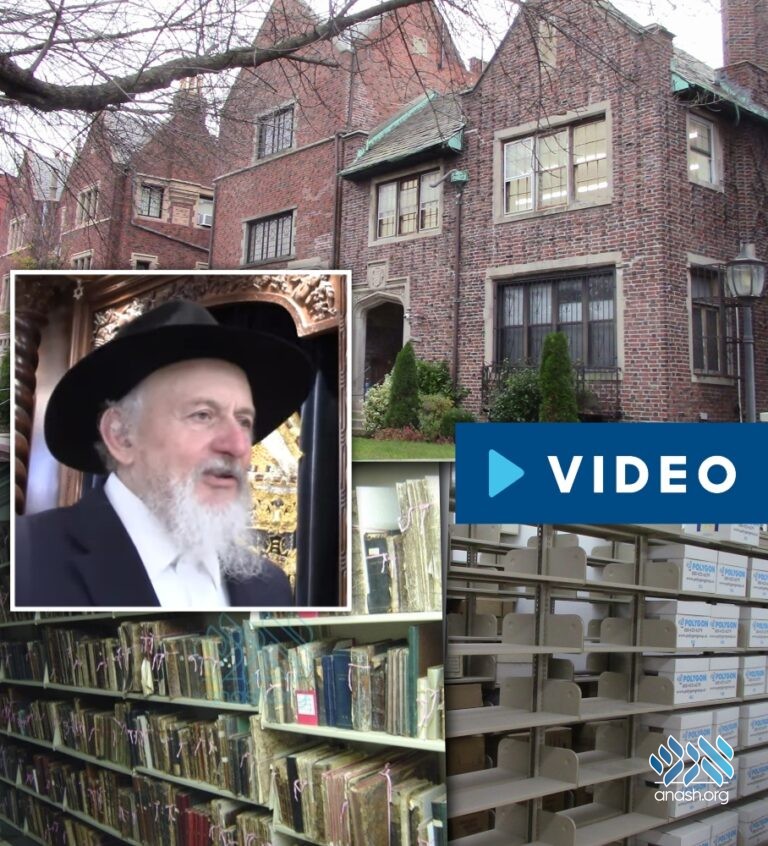 Ahead of the historic chanukas habayis for the new wing of the Rebbe’s library, Chief Librarian Rabbi Berel Levine presents an overview of the library’s long history, and the milestones that led up to this point. Exclusive to Anash.org.

By Rabbi Sholom Ber Levine – Head Librarian of the Rebbe’s Library, for Anash.org

In recent days, the renovation of the new wing of the Rebbe’s library has been completed, and on Hei Teves, the chanukas habayis will take place b’ezras Hashem, together with the kvias mezuza for the new wing.

In honor of the historic chanukas habayis, we present an overview, covering the many stages of the library’s expansion in the last 80 years, from the summer of 1941 until today:

In the summer of 1940, the building at 770 Eastern Parkway, a 3 story-building with a basement level, was purchased for the Frierdiker Rebbe, and to serve as the headquarters of Chabad Chassidus.

The first floor was dedicated to serve as a shul. The second floor was designated as the apartment of the Frierdiker Rebbe, and the third floor – as the apartment of his daughter and son-in-law Rashag. The basement level at the time served as an extended parking space, built for those who came to the clinic that existed until then in 770.

During the years of 1941-1950, the Frierdiker Rebbe continued to collect books, up until at the time of his histalkus, on Yud Shvat. At that point, the basement was filled with close to 100,000 books.

As soon as the Rebbe took over the nesius, he began to encourage people from near and far to send books to the library. At first the books were collected in the Rebbe’s office. When that was not enough, other locations were rented to keep the books.

This continued until 1956, when the 766 Eastern Parkway building, adjacent to the 770, was purchased. After the purchase, a whole floor in the building was dedicated to the library, cabinets were installed, and approximately 20,000 books were placed in them.

Over the coming years, many books and collections were sent to the Rebbe, until the space on this floor was not enough for them.

When the Rebbe appointed me to run the library in 1977, the floor dedicated to the library was packed to capacity, with many books still lying in boxes. We then set up bookcases on the bottom floor, and filled them with books as well.

These new bookcases sufficed for several years, during which more and more books and collections of books came to the library, until, once again, there was not enough place for all of them.

“Due to lack of space in the library building, last summer we moved all the English books and other languages ​​in the library (about 5,000 volumes) to the “garage” in this building, in special closets we set up for it. However, that location is protected enough from rain and cold and heat, and I have recently noticed some books that have started to get ruined. I would like to suggest that repairs should be made to the “garage” in such a way that it would be appropriate to keep books in it.”

The Rebbe responded by underlining the words “repairs should be made to  the garage”. And so the “garage” was renovated to become a proper expansion of the library.

In the years 1981-4, many more books were added to the library, and again, the space in the library was not sufficient to store them all.

In 1984, the library building was expanded, with one large room added to the ground level and basement. The room on ground level was to expand the apartment that had been built in the library for the Rebbe and the Rebbetzin. In the room on the lower floor there we installed cabinets that were soon filled with about ten thousand books

The day we started moving books to the new room, I wrote to the Rebbe:

“Today, after they completed the new room, we set up the bookcases and put about 2,000 books in them. Eventually there will be about 10,000 books in this room.”

The Rebbe replied with a bracha: “ויהי רצון שיהא בשעה טובה ומוצלחת” – it should be at a good and auspicious hour.

The need to expand the library building once again, started being felt acutely in 1987. In one of the reports I wrote then to the Rebbe, on Sunday 27 Nissan, I mentioned the fact that the library building was already overflowing and new books were being received every day and there was no room for them.

The Rebbe replied (that I should suggest) “a practical suggestion, according to the situation in the present and in the near future”

At the time, there was a plan to renovate the entire 770 and build a large, high rise building, nearly 20 stories high, which would house the main shul, the library and the many offices of the central Chabad institutions. According to that plan, an entire floor would be dedicated to the library. The renovation would be a lengthy one, leaving no short-term solution for the library.

So the next day I wrote again to the Rebbe:

“Regarding the library, I do not have any practical suggestions. I talked about this in detail with Rabbi Krinsky, and said he would look into it.”

And so, discussion and planning continued for a number of years. Meanwhile the seforim court case took place, culminating with the victory on Hei Teves, 1987.

In 1988, on the first anniversary of the victory of Hei Teves, the Rebbe delivered a sicha, declaring Hei Teves to be a a “yom segulah” and a “eis ratzon“, and requesting that rabbonim, authors of books, publishers and collectors send a copy of their books as a gift to the library of Agudas Chassidei Chabad. Many thousands of books were then sent in, making the overcrowding even more severe.

On Chai Elul 1988, the Rebbe lay the cornerstone for the expansion of 770. A number of days later, the Rebbe instructed that 770 only be renovated, and the planned new, high-rise building, not be built in its place.

“During the past year, about five thousand books were received at the library…. They are still in boxes – due to lack of space.

The Rebbe replied: “Speak to Agudas Chassidei Chabad regarding a building for the library in proximity to the current building or to expand the existing building.

“Today more seforim were brought to the library… A total of about ten thousand books are currently packed in the library, in boxes placed in the aisles in the library building, due to lack of room in the overcrowded bookcases. If Hashem helps, and the seforim arrive from Russia, which add up to an additional 10,000 seforim, we have no idea where we would place them. I ask for advice and for a bracha that I can run the library successfully.”

The Rebbe replied: “You should explore creating a committee for a building (and soon) in addition to the library in area 770 and adjacent to it.

Accordingly, I immediately spoke to Rabbi Shneur Zalman Gurary and Rabbi Shlomo Cunin. We willingly agreed to co-found the committee, and already on Motzei Shabbos we informed the Rebbe, who gave his consent and holy bracha to the committee, saying it should be “b’hatzlacha rabba”.

The next day, Sunday, when I passed by the ‘dollars distribution’, the Rebbe gave me another dollar, and said: “The building will need money too, most likely, this will be a start.”

At the end of Tishrei 5750 – 1989, I wrote to the Rebbe again with several suggestions, but instead of responding to them, the Rebbe wrote:

“Build within the area of 770. And even better would be to add in the building of 770 itself, in a way that will not undermine the building.”

On the Shabbos before Yud Tes Kislev, the Rebbe explained the reasoning for his suggestion. The Rebbe said that the library expansion will be in the same location as previously, because “קדושה לא זזה ממקומה”.

The new expansion was enough for all the 250,000 books that were in the library at that time. It also sufficed for the 20 to 30 thousand additional books, which were sent to the library over the years 1990-2010.

Around the year 2010, the building was once again filled with overpacked bookshelves, to the point that boxes of seforim were left in corners and stairwells.

At that time, philanthropist R’ Yitzchak Mirilashvili agreed to purchase the neighboring home, 760 Eastern Parkway, for the library, allowing the top floor to be renovated for another wing of the library.

In recent days, the renovations have been completed, and 100 new bookshelves were installed, with the capacity to store an additional 25,000 books. Immediately we began to transfer hundreds of boxes of books, which had hitherto been placed in all corners of the library.

The culmination of the decades of work will finally take place on the eve of Hei Teves, the day that the Rebbe established as a yom segulah for everything connected to the didan notzach of the seforim and the library. A modest ceremony will be held for the chanukas habayis, along with a keviyas mezuza for the new wing.

VIDEO: Rabbi Levine delivers a class on the history of the library