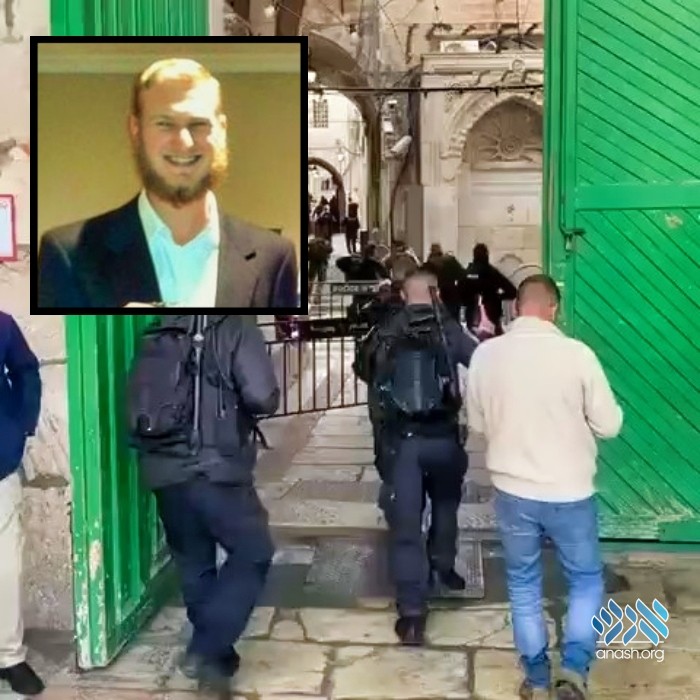 One Yid was killed and four injured in a shooting by an Arab terrorist at the Sha’ar Hashalshelet near the Kosel in Yerushalayim. The victim was killed as he was holding his tefillin and a volume of Likkutei Sichos.

The terrorist, who was later identified as a Hamas member, shot at passerby and police officers with a submachine gun at Sha’ar HaShalshelet (Chain Gate) in the Old City of Jerusalem.  He was shot and killed by nearby Border Police officers, who found a knife in his possession as well.

The victims, who ranged from lightly to critically wounded, were evacuated to Hadassah Ein Kerem, Hadassah Har HaTzofim and Shaare Tzedek hospitals in Jerusalem. Unfortunately, one of the victims that was critically injured was pronounced dead upon reaching the hospital.

He was later identified as Eliyahu Dovid Kay, h’yd, a 25-year-old resident of Modi’in, a recent oleh from South Africa, and an employee of the Western Wall Heritage Foundation. He was engaged to be married and his wedding was to take place in several months. He learned in the Tomchei Temimim Chabad Yeshivah in Kiryat Gat. He was killed as he was walking toward the Kosel for Shacharis and was learning from a Likutei Sichos as he was walking. Yehi Zichro Baruch.

Another victim was later identified as Reb Ze’ev Katzenellebogen, 46, a resident of the Jewish Quarter. He later told Channel 13 News: “I was leaving Shacharis, still wrapped in my tallis and tefillin. I heard gunshots and chaos. I didn’t realize what was going on and then I felt a sharp pain in my arm right at the place of my tefillin. I understand what a great neis I experienced. I could have lost my life in a second.”

The terrorist was later identified by Palestinian media as Hamas member Fabi Abu Shkhaydam, 42, a resident of Shuafat and a teacher of religious studies at an Israeli-Arab school in the Old City.

According to Public Security Minister Omar Bar-Lev, the attack was planned well in advance. “The terrorist was a member of Hamas’ political branch who prayed every day in the Old City,” Bar-Lev said. “He used standard weapons that aren’t commonly available in Israel and his wife escaped abroad three days ago.” The terrorist’s children are also abroad.

Police Commissioner Kobi Shabtai said that the terrorist was known to the police for his criminal activities but was not considered a terror threat. However, since the terrorist was known to be a member of Hamas and was recognized by the police for his criminal activity, the fact that he was teaching at a school recognized by the Education Ministry and the Jerusalem Municipality seems to have been a severe security lapse.