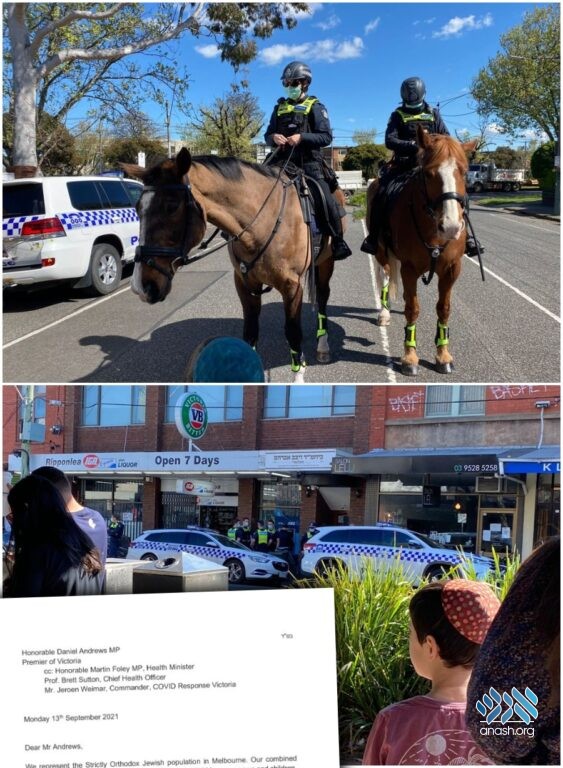 Severe restrictions imposed in Melbourne, Australia, ban Jews from gathering in minyanim for Yom Kippur. Despite an international appeal, police in cars and on horses patrolled shuls in the frum areas to enforce the lockdown.

In their fight against COVID, the State of Victoria, Australia has imposed severe restrictions. Yet, while allowances have been made for other essential needs, the government refuses to allow minyanim for Yom Kippur.

For the second year, residents of Melbourne, Australia, were forced to spend Rosh Hashona in lockdown, davening at home, with only a small allowance to blow Shofar in the streets. Approaching Yom Kippur, the thought of having to daven alone was frustrating.

Left with a short amount of time, Rabbonim and askonim from various communities united to organize a coordinated submission to the government, appealing for the essential need to daven with a minyan to be accommodated.

In the submission signed by Rabbonim and frum doctors, they pleaded with the government to allow minyanim to be open with masks and distancing as has been allowed with other essential events. In fact, the Victorian Health department recently permitted a boxing event to be held in locked-down Melbourne attended by 69 people. “It would be fair to state that religious services in a place of worship, on the holiest day of the Jewish calendar, are more essential than a Thai boxing event,” the plea stated.

In addition, activists garnered support from Rabbinical bodies overseas including the Agudas Harabonnim of America and the Chief Rabbis of Israel and Russia, who rallied to help their fellow Yidden in Melbourne with strongly worded letters to the government on their behalf.

Following the outpouring of support, the New South Wales government allowed for minyanim in Sydney. However, the State of Victoria governing Melbourne denied the request.

On Wednesday morning, Erev Yom Kippur in Melbourne, heavy police presence in cars and on horses were seen patrolling shuls in the frum areas, enforcing the lockdown.