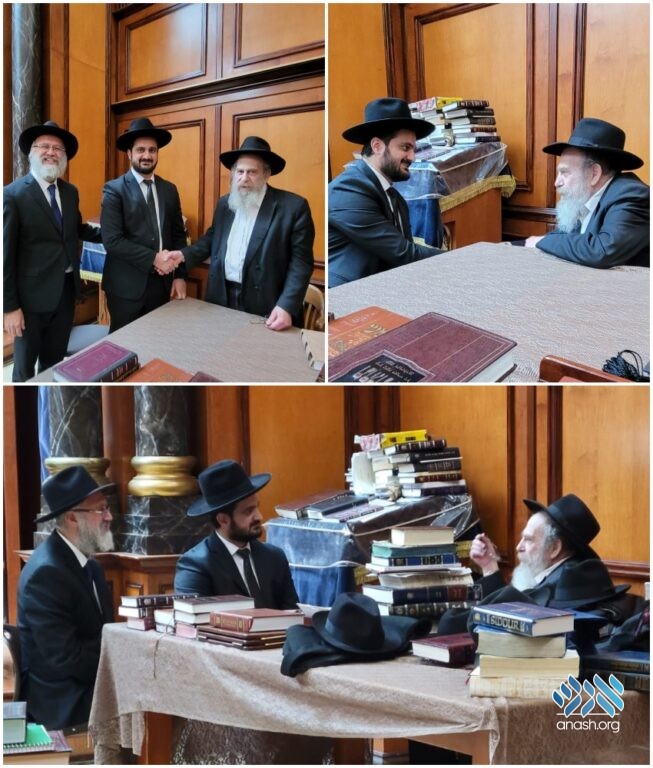 35 year old Rabbi Gerami grew up in Teheran, Iran, and learned in yeshivos in Eretz Yisroel and America. Ten years ago, after receiving semicha and his marriage to his Iranian-born wife, he returned to Iran, and began giving shiurim and helping with religious functions. As the religious offices related to kashrus, beis din and mikveh were vacant, Rabbi Gerami gradually assumed one role after another until he was acknowledged as the chief rabbi of Iran.

Currently, the Jewish community in Iran numbers approximately 10,000 individuals, mainly concentrated in the cities of Tehran, Shiraz, and Isfahan, The community supports a network of government-sanctioned religious services, including shuls, yeshivos, kollelim, shechitah, mikvaos, and training for mohelim.

In recent days, the Chief Rabbi has been paying a visit to Los Angeles, California. The greater Los Angeles area is the home to the largest diaspora of Iranian Jewry, who fled there after the 1979 Iranian Revolution. During his stay, he visited the Persian shuls and Chabad Houses in the area, and also was welcomed into the city’s Chabad schools.

The Chief Rabbi was accompanied on his visits by Iranian-born Shliach Rabbi Danny Yiftach, who heads Chabad of Marina del Rey in Los Angeles, California, and is active in outreach within the Iranian-American Jewish community.

On his visit to YOEC, Rabbi Gerami was given a tour of the entire yeshiva complex, including the Beis Medrash and Mesivta, the dormitory, mikvah. Rabbi Gerami expressed much interest in the going-ons in the yeshiva, and was delighted to find bochur Chaim Chitrik, son of his close friend Istanbul Shliach Rabbi Mendy Chitrik, among the students.

Rabbi Gerami was then greeted by Rosh Yeshiva Rabbi Schochet, and the two sat down for a lengthy discussion on halachic questions that had recently arisen, Jewish life in Iran and Los Angeles, and the holy work being done by both of them, each in their own way, to bring Yiddishkeit to future generations.