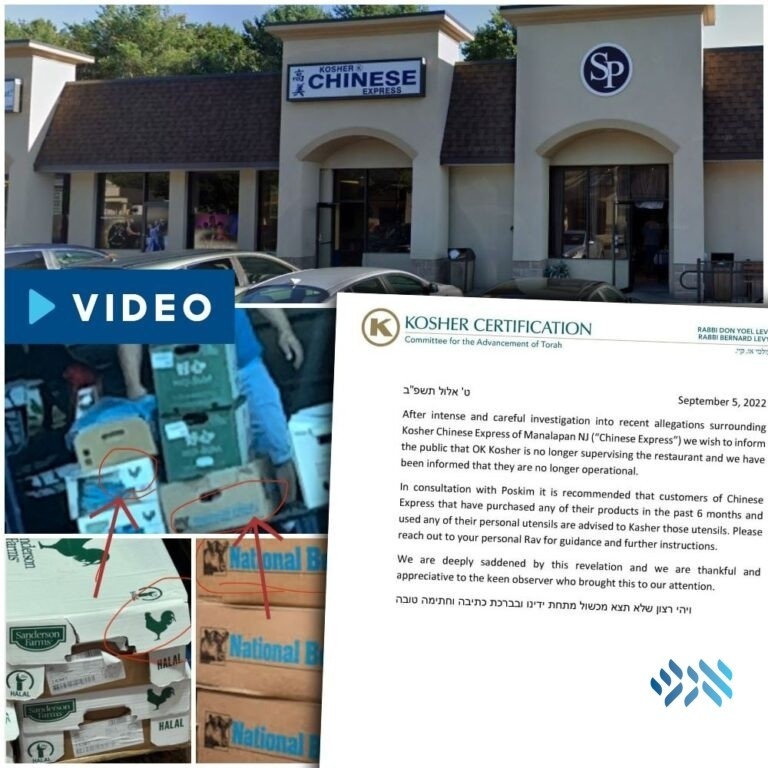 After suspicious videos were captured of a kosher restaurant owner buying treif meat in Manalapan, NJ the OK investigated and decided to remove the restaurant’s hashgacha.

OK Kosher has pulled their certification of Kosher Chinese Express in Manalapan, NJ, after an incriminating video emerged of the eatery’s owner buying treif meat and chickens at a nearby wholesale store.

The scandal started yesterday when the non-Jewish owner of the restaurant was seen buying treif bulk chicken and meat from Restaurant Depot. Pictures and video were taken of the owner loading his groceries into the car and was shared with the OK, the certifying hechsher.

The OK immediately began investigating the situation and quickly decided to pull the hechsher from the restaurant. At the same time or shortly after the restaurant announced that it would be closing permanently. It is unclear if the restaurant decided to close as a response to the OK’s findings or due to the community’s outcries at the newly revealed information.

In a statement, OK Kosher said that “after intense and careful investigation” into the allegations, it has determined that it must pull its hashgacha from the popular restaurant, and said the eatery is no longer operational.

“After intense and careful investigation into recent allegations surrounding Kosher Chinese Express of Manalapan NJ (“Chinese Express”) we wish to inform the public that OK Kosher is no longer supervising the restaurant and we have been informed that they are no longer operational,” they wrote.

The hashgacha also shared that the findings were enough that people should consider kashering utensils used at home with the food from the Chinese restaurant.

“In consultation with Poskim it is recommended that customers of Chinese Express that have purchased any of their products in the past 6 months and used any of their personal utensils are advised to Kasher those utensils. Please reach out to your personal Rav for guidance and further instructions,” the statement said.

This continues to be a developing story as new information comes to light.

You can see the original video sent to the OK below: