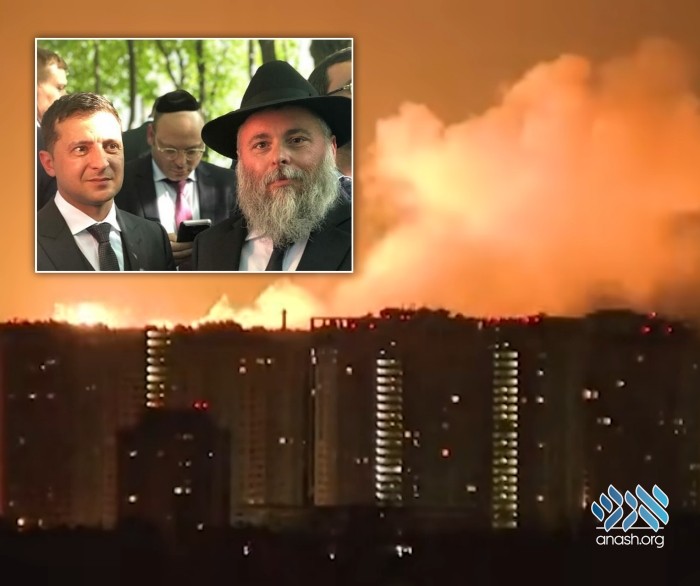 Kyiv Head Shliach and Chief Rabbi Yonasan Markovitch fled the city overnight Monday, after authorities warned him that the situation was very bad, “particularly someone with his look.”

Kyiv Head Shliach and Chief Rabbi Yonasan Markovitch fled the city overnight Monday, together with about 15 other Jews, after authorities warned him that he was in immediate danger.

Rabbi Markovitch and his wife Inna initially decided to stay in Kyiv despite the Russian onslaught against the city to help the people who lacked the means or the physical ability to seek refuge elsewhere. They turned their shuls’s basement into a shelter, stocked with 50 beds and several tons of food, as well as water and fuel. Dozens of people took shelter there amid Russian bombardments of the city.

“The local security officials asked me and helped me to leave. They saw that the situation was very bad, particularly someone with my look. They knew me and told me to leave. They said it was safer for the community, for me and for them,” Markovitch told The Times of Israel on Tuesday.

It was not immediately clear if the officials were referring to a specific threat against Markovitch or against Jews, or just general instability in the beleaguered city. Israeli officials have raised concerns about a potential rise in antisemitism in Ukraine in light of the chaos following the Russian invasion.

Rabbi Markovich crossed into Romania on Tuesday morning and is continuing to Budapest, Hungary, where he will join Jews from Kyiv who fled there earlier.

The Rav explained to Walla News on Tuesday morning that Kyiv is under an almost complete siege. “The Russians are preventing the entry of food and fuel so there are severe shortages in the city. I left with mixed feelings and a heavy heart. I still don’t know if I did the right thing.”

He said that he planned to remain close to the border, from which he would continue overseeing the flow of humanitarian aid to those still stuck in Kyiv, which has been battered by Russian artillery and aircraft in recent days, as well as helping evacuate people who are still in the city and can make it out.

According to the report, Rabbi Markovich was told to flee due to fears of Chechen collaborators and mercenaries who fought in Syria, who are infiltrating the city of Kyiv to provoke terror among the civilian population and create chaos ahead of Russia’s takeover of the city.

On Tuesday afternoon, Russian troops warned residents of Kyiv that it is about to attack the infrastructure of Ukraine’s security services in the city and urged residents to leave, AFP reported.