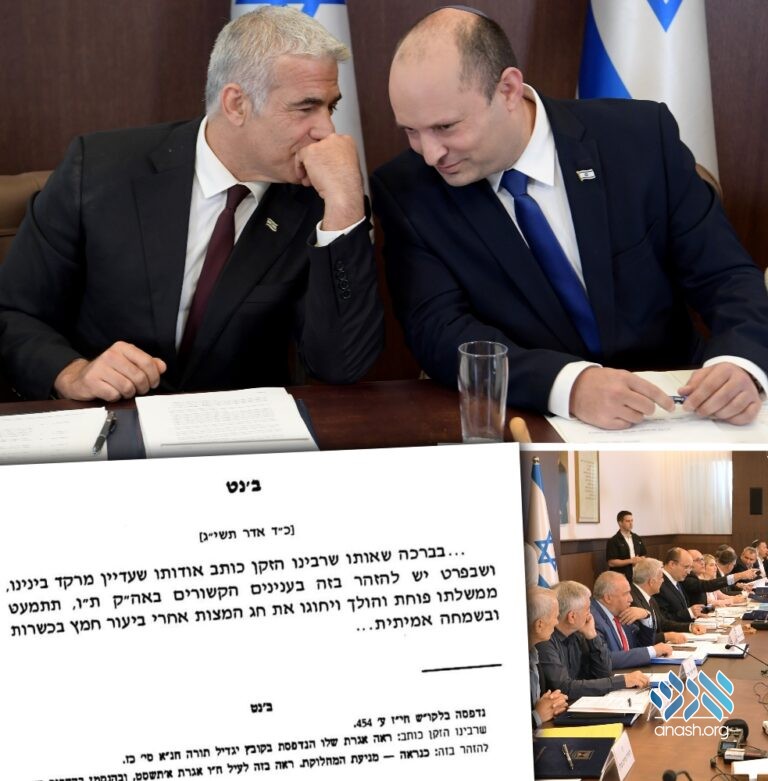 In a move that is shaking up Israeli politics, coalition chairman and MK Idit Silman announced her resignation from the government on Wednesday, leaving PM Bennet without a majority in the Knesset. Some have pointed to a letter of the Rebbe as harbingering the shakeup.

In a dramatic move, Knesset Member Idit Silman, who serves as the coalition chairman in the current Bennet-Lapid government, announced Wednesday that she is quitting the coalition and will instead work to form a new government.

The move leaves PM Naftali Bennet without a majority in the Knesset, leaving the government neck and neck with the opposition, thereby preventing them from passing legislation. If an additional person were to resign, the government would collapse and Israel would head into elections once more.

Silman’s move comes on the background of a coalition crisis caused by Health Minister Nitzan Horowitz’s order to allow chometz into hospitals on Pesach, reversing a policy that has been in place for decades. Silman warned that she would do her utmost to stop the move, and on Tuesday her husband said in a radio interview that “Idit will not sell her Olam Haba for any payment.”

“I can’t [continue] any longer,” Silman said. “I attempted unity and worked hard for the current coalition. Unfortunately, I cannot lend a hand to the harm of the Jewish identity of the state of Israel and Am Yisrael. The public is not aware of everything I tried because I did it quietly.”

“I’m ending my membership in the coalition and I will continue to try to convince my friends to return home and establish a right-wing government. I know I’m not the only one who feels this way.”

According to reports, Prime Minister Naftali Bennett, who heads the Yamina party, was not aware of her decision and was taken by surprise on Wednesday morning. He has reportedly canceled the schedule he had planned for the day in order to deal with the fallout of her resignation.

Bennett will meet with alternate prime minister and Foreign Minister Yair Lapid on Wednesday morning regarding the crisis this news has thrown the government into.

Members of the coalition blasted her decision, while members of the opposition warmly welcomed the move, praising her courage and declaring they would welcome her with open arms.

Silman’s move also puts a hold on a number of pieces of legislation that would have damaged the religious status quo in Eretz Yisroel, including sweeping changes to the giyur system and limited recognition of the Reform and Conservative movements.

The news broke early Wednesday morning, shocking many on the Israeli street. But some Chabad chassidim pointed to a letter of the Rebbe as fortelling exactly such an scenario.

The letter, printed in volume 7 of the Rebbe’s Igros Kodesh, is numbered as letter 2,059, or in Hebrew – ב’נט, which also spells out Bennet, the name of the current Prime Minister. In the letter, the Rebbe writes about the Yetzer Hara, “whom the Alter Rebbe says still dances among us…”

Then the Rebbe adds: “…one must especially be careful regarding manners pertaining to Eretz Yisroel…may his ממשלה shrink and dwindle…” The word memshala in this context translates as ‘dominance’, but the word can mean ‘government’ as well…

Those who noticed the letter pointed out that the continuation is even more striking: “…and may they celebrate Chag Hamatzos after biyur chometz in a kosher manner and with true joy…”

So does the letter foretell the shrinking of the Bennet government just days before Pesach, as a result of a crisis over biyur chometz…or is it simply a astounding hashgacha protis?