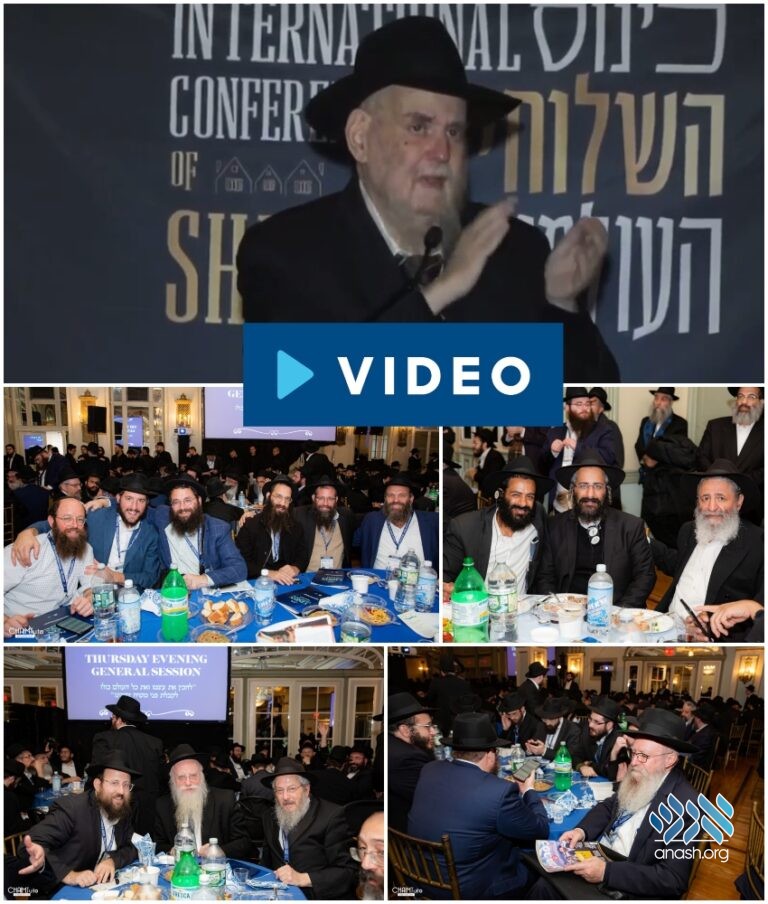 A spontaneous standing ovation and a rousing rendition of the Rosh Chodesh Kislev Niggun was how thousands of shluchim responded when Rabbi Moshe Kotlarsky announced “Welcome to the Kinus Hashluchim 5782!” at Thursday’s general session.

Thousands of shluchim gave a standing ovation in salute to Rabbi Moshe Kotlarsky, Vice Chairman of Merkos and Chairman of the International Conference of Shluchim, when he began his speech during Thursday’s general session at the Kinus.

For close to 40 years, Rabbi Kotlarsky has served as the Kinus Chairman, ever since it the Kinus began in 5745. Throughout the year, Rabbi Kotlarsky also plays a key role in expanding the global Shlichus network of Chabad centers and institutions. For his extensive travels, taking him from one corner of the globe to the next in his mission to assist shluchim, he earned the nickname “Judaism’s Globe Trotter.”

Every year, as the Kinus approaches, Rabbi Kotlarsky leads a team that plans the annual event down to the last detail, spending countless hours preparing for the annual event. As the Kinus commences, he heads the programs, culminating with the grand banquet, where his global roll call has become an annual highlight.

On Thursday of this year’s Kinus, Rabbi Kotlarsky stood up to address the general session, where thousands of shluchim gathered together after spending the day in smaller workshops. But, as soon as he began speaking, welcoming the shluchim with a warm “Welcome to the Kinus Hashluchim 5782!”, the thousands spontaneously stood up on their feet, clapping and saluting the man who helped and continues to help shluchim across the world. They then burst into a lively rendition of the Rosh Chodesh Kislev Niggun, widely known as “the shluchim niggun” due to its association with the Kinus.

After a few solid minutes of singing, the visibly emotional Rabbi Kotlarsky continued speaking, telling the shluchim that the decision to hold this year’s Kinus in person was not an easy one, but one that had to be made. Nothing could substitute for the shluchim meeting face-to-face, especially after two years when that could happen, he said.

He also shared that recently, he had overcome some health challenges, but Baruch Hashem, the situation had improved.

“Everything is in order, and will be in order, and I am working full days,” he told the crowd of shluchim. “The only thing that will come out is that we will start doubling our activities, preparing the world to welcome Moshiach!”