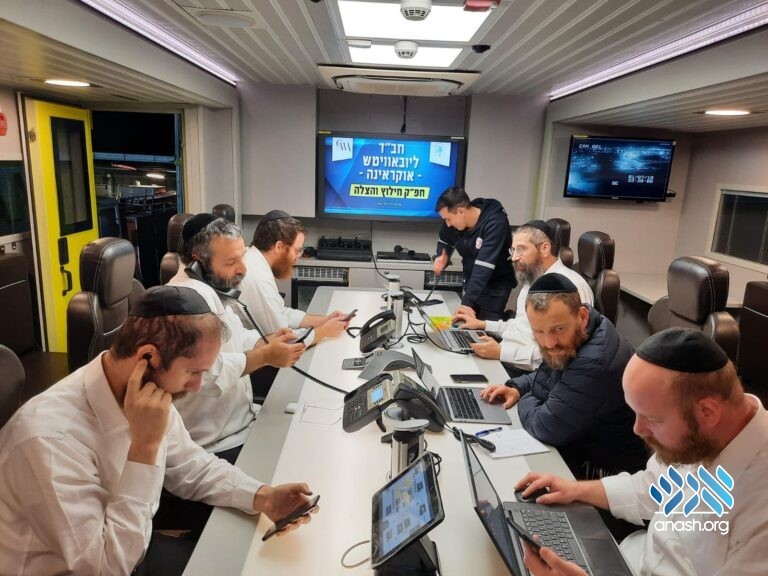 Russian-speaking Shluchim and bochurim in Eretz Yisroel and New York worked non-stop on Shabbos calling Jews in Ukraine and convincing them to flee the county before it’s too late.

Not your usual sight on a Shabbos afternoon.

Russian-speaking Shluchim and bochurim in Eretz Yisroel and New York spent the whole shabbos on the phone, calling Jews in Ukraine to convince them to flee the county before it’s too late.

Dialing every cellphone and landline they could reach, the group of volunteers patiently explained to many elderly Jews the significant danger facing everyone who remains in the country as missiles and bombs fall on civilian areas.

Callers also provided them with detailed instructions on how to reach busses arranged by Chabad to get them out of the war-torn country.

The unusual sight reminded many Chassidim of the story related by the Rebbe many times about the Ahavas Yisroel of the Alter Rebbe.

One year during davening on Yom Kippur morning, the Alter Rebbe suddenly removed his Tallis and Kittel and exited shul. Alone, he made his way to the home of a woman in childbirth on the outskirts of town.

Upon entering the home, the Alter Rebbe proceeded to chop firewood and light a fire in the fireplace and cook hot soup for a woman whose family had all left her to go to spend the day in shul.

The Rebbe would explain that if the Alter Rebbe could himself break the laws of the holiest day of the year to help one Jewish woman, this must impress upon us the necessity to do all we can to help another in their time of physical or spiritual need.

A number of Rabbonim, including Harav Yitzchok Yehuda Yaroslavsky and others, were asked about saving Yidden from Ukraine on Shabbos, and each one paskened unequivocally that every and any effort must be made to save more Yidden from danger zones, without delaying even a short while.

[Above photo taken after Shabbos.]