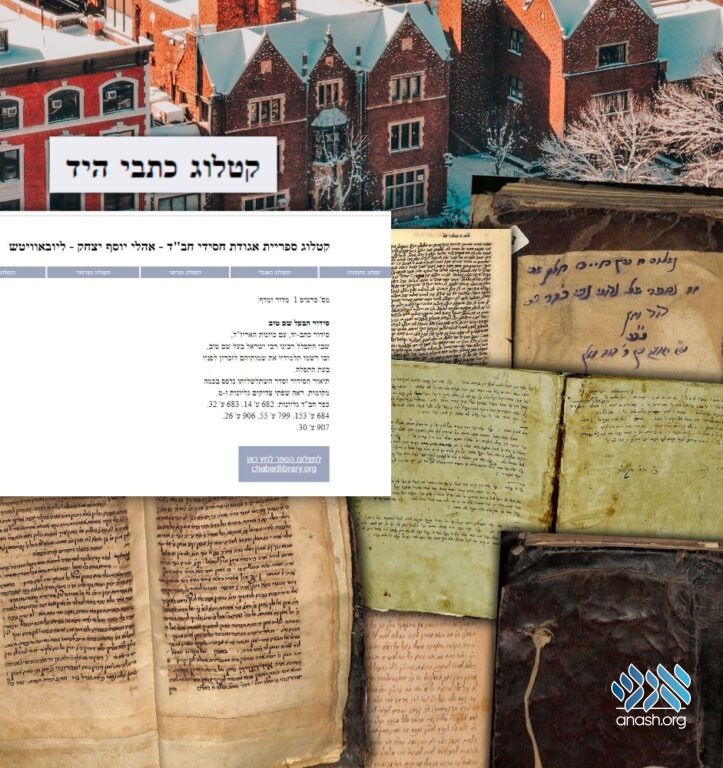 Nearly 3,000 manuscripts and kisvei yad kodesh belonging to the Rebbe’s library, including the priceless Siddur of the Baal Shem Tov, were scanned and uploaded online, in a move that is exciting researchers, scholars and chassidim.

Thousands of manuscripts and kisvei yad kodesh, the ‘crown jewels’ of the Rebbe’s library, were scanned and uploaded online, in a move that is exciting researchers, scholars and chassidim.

“We just concluded a two-year long project of of scanning the collection of manuscripts in the library of the Agudas Chassidei Chabad, editing the files and uploading them to the library’s website,” Rabbi Berel Levine, chief librarian of the Rebbe’s library, told Anash.org.

The collection of manuscripts in the Rebbe’s library contains close to 3,000 manuscripts. The main bulk of them are Chabad Torah, including approximately 200 volumes of kisvei yad kodesh of the seven Chabad Rebbeim.

Rabbi Levine said that scanning and uploading the manuscripts would bring great benefit to many, including those who are studying a ma’amar and would like to check if it was transcribed accurately. One would also be able to check differences between various manuscripts of the same ma’mar.

“In thousands of ma’amarim of the first five Rebbeim, the publishers noted which ksav yad the ma’amar was transcribed from. Some were transcribed from the Rebbeim’s holy handwriting, others from copies made by chassidim. Now, one can check up each ma’amar in its original source,” he said.

The collection also includes early drafts of the Alter Rebbe’s Tanya, Torah Ohr and Likkutei Torah, and even priceless manuscripts such as the Siddur of the Ba’al Shem Tov.

In addition, the collection contains many volumes of teshuvos in Halacha, Kabbalah, derush, and other topics, both those written by the Rebbeim and their chassidim, as well as those written by other great rabbonim and rebbes from many dynasties.

Rabbi Levine noted that, in accordance with the instructions of the Frierdiker Rebbe and Rebbe, all publication rights of the material in this collection, the teachings of the Rebbeim and their chassidim, are held solely by Kehos.