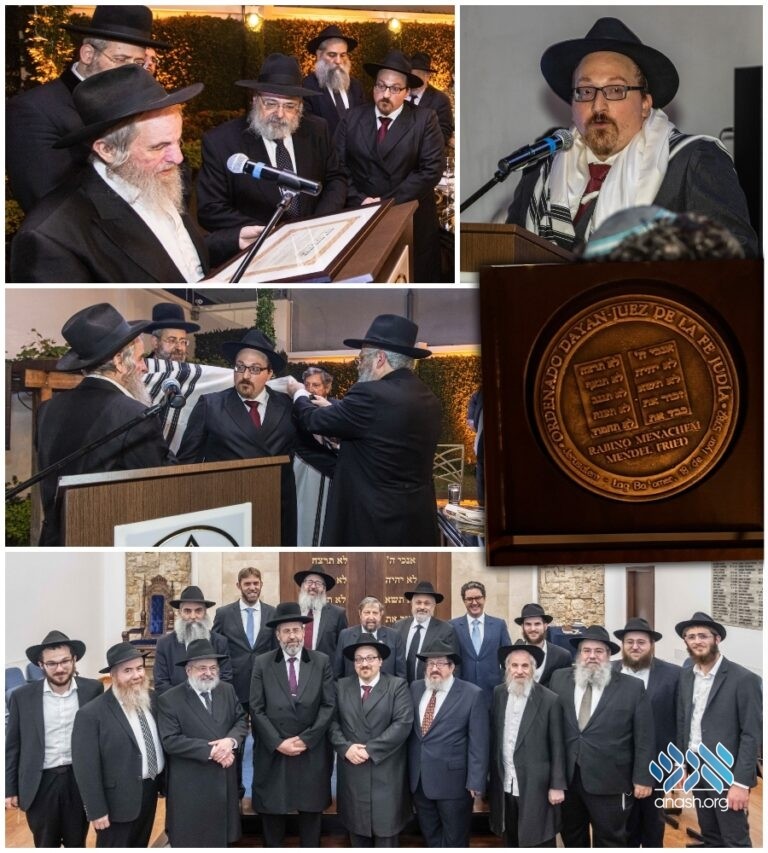 Jews have been living in Ecuador since the 16th and 17th centuries, when Sephardic Jews began arriving from Spain and Portugal as a result of the Spanish Inquisition. At its peak, thousands of Jews called the country their hmoe, but today, the community forms one of the smallest Jewish communities in South America.

For the past number of year, Rabbi Fried has been serving as the shliach to Guayaquil, Ecuador, where most of the country’s Jews reside and where the Orthodox community is based out of. At the same time, he continued his studies towards becoming a Dayan and Rov.

This past week, upon the completion of his studies, the community held a ceremony ordaining him as the Rov of the community, and in effect, the Chief Rabbi of Ecuador.

Attending the event was the Chief Rabbi of Israel, who made an historic visit to the community in tandem with the event. The event was also attended by the ordaining rabbis, Rabbi Yosef Feigelstock from Argentina, Rabbi Yoram Ulman from Australia and Rabbi Ezra Batzri, av beis din of the Jerusalem Rabbinic Court. Shluchim from nearby countries also attended, including Rabbi Aaron Laine from Panama, and Rabbi Mendel Carlebach from Peru. Other overseas visiting included Rabbi Kasriel Shemtov from Eretz Yisroel, Rabbi Menachem Gansburg, Rabbi Eliezer Lazaroff and Rabbi Peretz Lazaroff of Houston, Texas, Rabbi Fried’s father Rabbi Yisroel Fried of Manhattan, New York, and his father-in-law and Rabbi Shlomo Cohen of Charlotte, North Carolina. The honorable Zeev Harel, Israeli Ambassador to Ecuador also attended.

After the ordaining rabbis and Rabbi Lau presented Rabbi Fried with a certificate attesting to his appointment as the Rov of the community, they placed a tallis on his shoulders, after which he made the bracha of shehechiyanu, as is customary on such occasions.

The assembled congratulated Rabbi Fried on his new position, and heard addresses by the visiting rabbis and by Mr. Johnny Czarninski, President of the Jewish Community of Guayaquil.

Separately from the reception, the visiting rabbis also were shown around the community institutions, as well as the famed ‘Jerusalem Park’ in the city, which contains a model of the Beis Hamikdash and displays about Yerushalayim in those times.