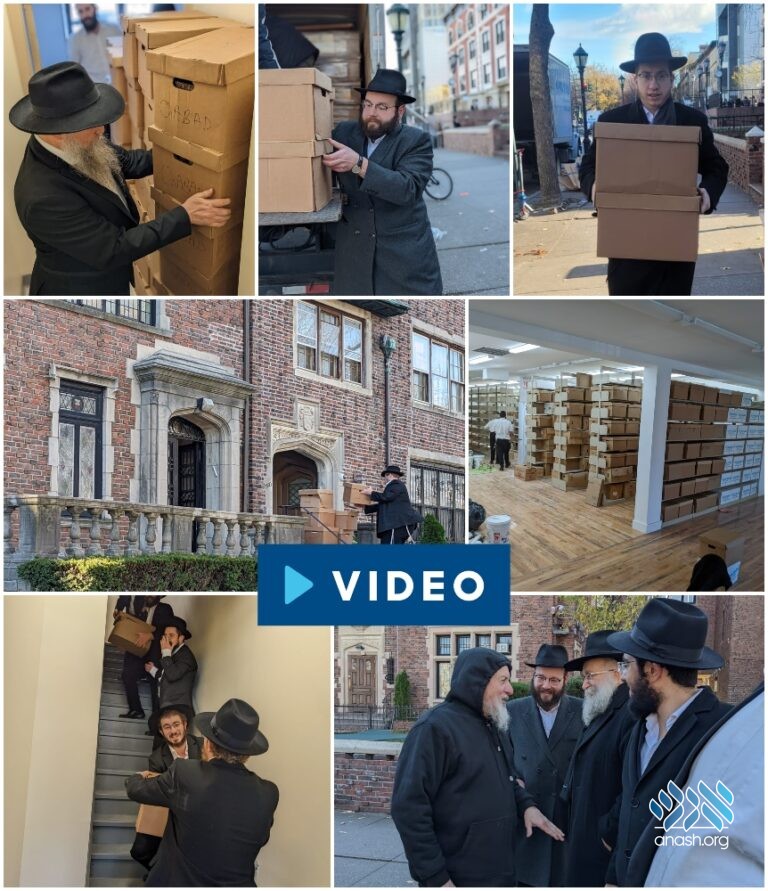 A truckload of priceless books and seforim were returned to the Central Chabad Library and placed in the newly-built wing on Friday after undergoing a specialized process to restore them from water damage sustained during Hurricane Ida.

A truckload of priceless books and seforim were returned to the Central Chabad Library on Friday, after undergoing a specialized process to restore them from water damage sustained during Hurricane Ida.

With over a quarter of a million printed books, and tens of thousands of manuscripts, artifacts, photos and newspaper clippings, the library holds a place of prestige among researchers and scholars of all Jewish subjects. With many of the books rare or unique to the library, and the manuscripts and artifacts one-of-a-kind, the contents of the library hold priceless value.

During Hurricane Ida, the lower level of the library flooded, damaging approximately 5,000 seforim and books. To preserve and restore the books, they were immediately transported to the Polygon Group, a company that specializes in mitigating and controlling the effects of fire and water.

On their website, the Polygon Group describes the methods they use to use to restore books and documents that had been water damaged.

“The vacuum freeze-drying process is the most efficient and effective method for the drying of wet papers and other documents. Using this method, Polygon technicians can restore water-damaged materials quickly and effectively, reducing back processing time by 20 to 30 percent. During this process, the materials are placed in an airtight chamber into which negative vacuum pressure is induced. As a result, the documents go from the frozen state to being dry without ever becoming re-liquefied. This method is especially beneficial in cases where documents may warp or distort,” they write.

After painstakingly ensuring that each book would be salvaged, the first batch of books arrived back at the library two weeks ago. At the same time, the library continued to repair the damage caused to the lower level of the library, hoping to complete it in the near future.

On Friday, the second batch arrived, this time consisting of a full truckload of books. The books were unloaded by the librarians of the library, with the help of a group of enthusiastic bochurim and yungeleit.

While waiting for the lower level to be useable again, the books were stored in the newly completed expanded wing of the library, contained at 760 Eastern Parkway, adjacent to the original library building, and formerly the home of R’ Meir and Sima Itkin. As previously reported on Anash.org, the new wing was built in response to the overwhelming demand for new shelf space, and has the capacity to store 25,000 books.

“It was exciting, even emotional to help bring back the Rebbe’s seforim to the Rebbe’s library in the days leading up to Hei Teves,” Mendel Brandwine, one of the yungeleit who participated in the unloading, told Anash.org. “We hope that very soon we will have the zchus to also help unload the seforim from Russia in their rightful place – the Rebbe’s library.”