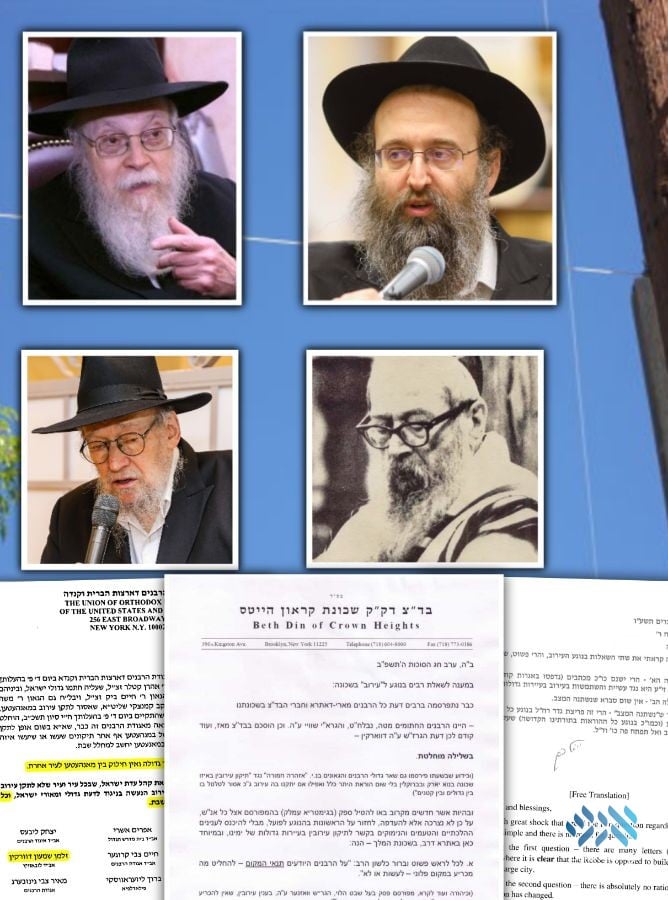 For decades, the Rebbe’s position against the establishment of eruvin in large cities was well known. A recent attempt to rewrite history was called out by the Crown Heights Rabbonim.

For decades, it has been common knowledge amongst Anash the Rebbe‘s position against the establishment of eruvin in large cities.

The concept of eruv and the need for one isn’t new, and yet no eruv was ever constructed in Crown Heights. It was kept that way at the explicit instructions of the Rabbonim who were familiar with the Rebbe’s guidance on the matter. In a yechidus with Reb Hirshel Chitrik, then head of the Vaad Hakahal, the Rebbe made it clear that an eruv should not be allowed in Crown Heights.

The Rebbe’s stance was well known and accepted by Anash in Crown Heights and around the world.

In recent years, certain individuals began pushing for more lax standards concerning eruv. Disregarding the longstanding tradition and local Rabbonim, they brought in outsiders and constructed an eruv of their own. At that time, Rabbonim and prominent chassidim – such as Rabbi Leibel Groner and Reb Yoel Kahn – affirmed the Rebbe’s position against an eruv in Crown Heights.

However, since the passing of the said chassidim, an aggressive campaign was undertaken to rewrite the longtime Lubavitch psak and the Rebbe’s stance. They collected several ambiguous responses from the Rebbe and twisted them to state that the Rebbe wanted an eruv in Crown Heights!

While most are aware of the Rebbe’s position, there are many younger people and guests who aren’t familiar. To make things clear, the Beis Din of Crown Heights issued a letter on the matter.

The following is a free translation of their letter:

“The position of all the Rabbonim and members of the Beis Din of Crown Heights has already been publicized – including the Rabbonim signed below and Harav Yaakov Schwei, it had also been thus decided by the Beis Din way from the beginning and it had been the stance of Harav Zalman Shimon Dworkin before then – that it is absolutely unacceptable.

“However, since recently some have come to cast doubt (safek being the same numerical value as amalek) on that which is well known by Anash, we need only to reiterate the practical ruling without getting into the halachic issues concerning eruvin in modern metropolises, particularly Crown Heights:

“1) First and foremost are the Rebbe’s words: ‘It is upon the Rabbonim who know the conditions of that place to decide what determines in that place – whether to make one or not.’

“2) The argument (following a deceptive publicity campaign with efforts to recruit outside approval) that it is possible to construct an eruv without the approval of local Rabbonim – borders on the destruction of Yiddishkeit, RL.

“3) In practice: It is absolutely prohibited to carry on Shabbos in the streets of Crown Heights, and the “eruv” is as nonexistent.”