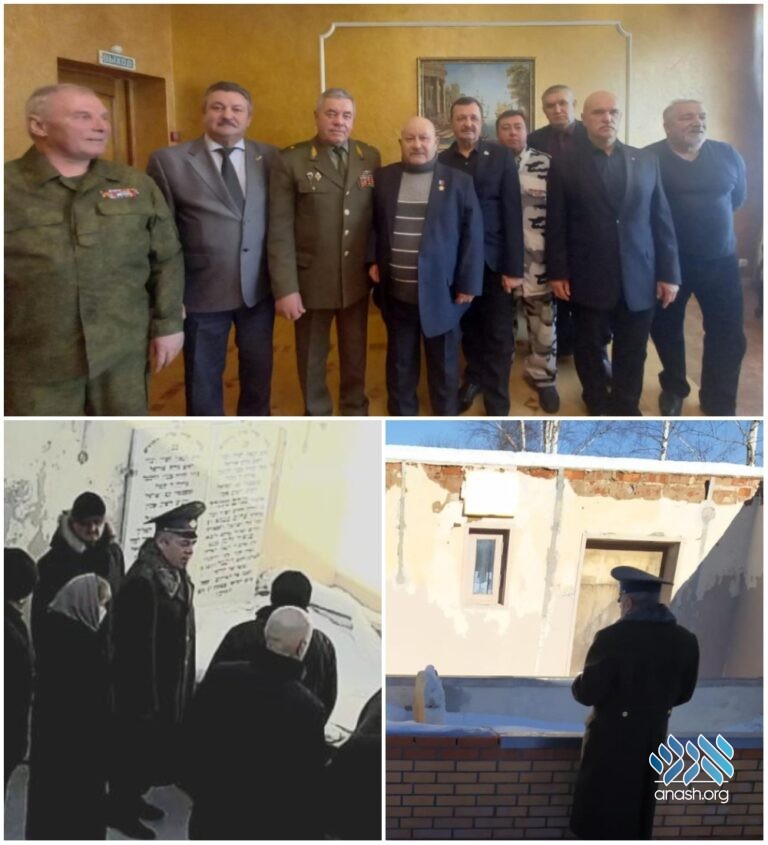 About 15 Russian officers and military personnel, some of them decorated with prestigious medals, arrived this week in the town of Lubavitch to pray “for peace among the nations of the region.”

About 15 Russian officers and military personnel, some of them decorated with prestigious medals, arrived this week in the town of Lubavitch to pray for peace.

The Tzemach Tzedek and Rebbe Maharash lived in Lubavitch and are buried there. Many Jews and non-Jews travel to daven at their holy resting place.

The group of officers included several which are well-known throughout Russian, including ‘Hero of Russia’ Hasan Najafov Rajab (the highest honorary title of Russia, which has been awarded to only 1,094 people), General Alexander Illitz Sabaleir who is decorated with Red Star medals, Colonel Alexander Ibnovich who was also awarded the ‘Order of the Red Star’, Alexander Lukin, chairman of the paratroopers’ union of the Smolensk region and others. Hasan Najafov Rajab, a native of Baku, Azerbaijan, received the ‘Hero of Russia’ award due to his courage and bravery in the battle in Chechen in 1999.

The officers visited the cemetery on the 33rd anniversary of the Russian withdrawal from Afghanistan – a war in which they took part – and said they had come to pray “for peace among the nations of the region”, and “to prevent war”.

The officers told the surprised Jews who they met that they had come because they heard that the prayers at the resting places of the Jewish righteous are readily accepted. They therefore traveled all the way to the remote village of Lubavitch to pray that no war would take place.

The guests also visited the monument in memory of the Jews of Lubavitch who were murdered in the Holocaust, as well as the restored historical buildings of the Chabad Chassidim scattered throughout the town.

Today, the small town is home to about 200 people, none of whom are Jewish. 22 years ago, Rabbi Gavriel Gordon was appointed as shliach to Lubavitch. He built guest houses, renovated the cemetery and is constantly discovering artifacts from the town’s rich Jewish past. Rabbi Gordon also takes responsibility for the restoration and upkeep of the holy and historic sites, with the assistance of the local government, Chief Rabbi of Russia Berel Lazar and with the help of the Agudas Chassidei Chabad of Russia, headed by Rabbi Yitzchak Kogan.

“In recent years the town of Lubavitch has become a center of prayer for thousands of people each month,” said Rabbi Gordon. “Most of them are Jews, but I also meet non-Jews almost daily. They flock here from all over Russia and everyone is welcomed happily. I believe that the prayers of the senior officers will also be accepted – and maybe they will even prevent a war.”