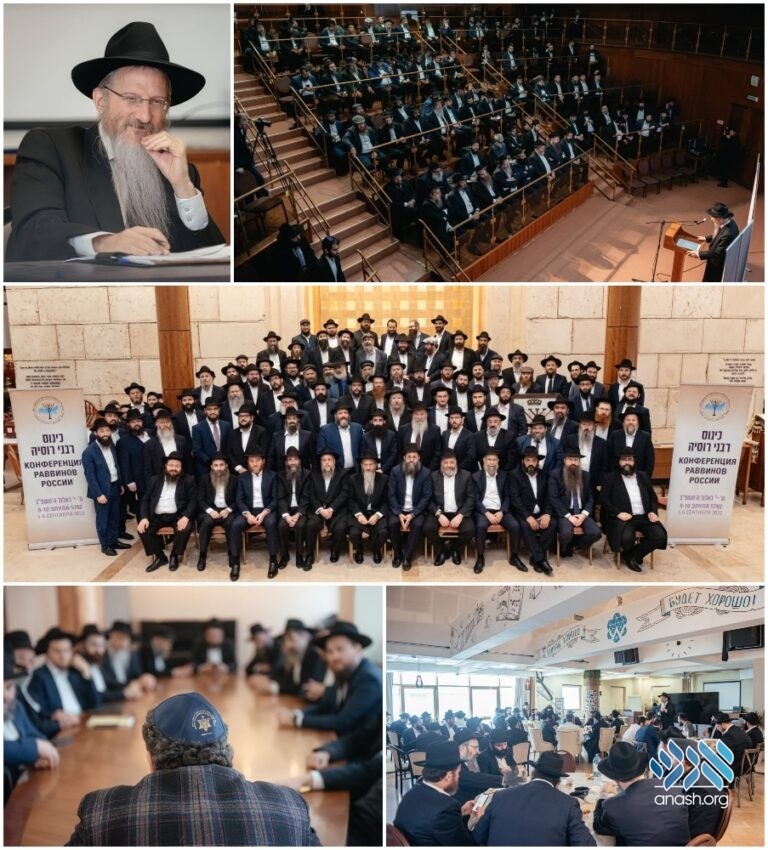 Seventy-five leading Russian shluchim gathered at an emergency conference on Monday to reiterate their commitment to “not abandoning their communities and staying with them…no matter how complicated things get.”

Seventy-five leading Russian shluchim and rabbis gathered on Monday to reiterate their collective commitment to “not abandoning their communities and staying with them to provide spiritual, psychological and emotional support, no matter how complicated things get.”

The shluchim and rabbis had gathered for an emergency conference in Moscow on Monday, organized by the Federation of Jewish Communities of Russia. Headed by Chief Rabbi Berel Lazar, they pledged to each remain in the location where they serve their communities and called for peace and an end to the bloodshed.

“We pray for the well-being of all the inhabitants of the world, regardless of race or nationality… We call on world leaders to do everything in their power to bring peace between nations. Peace is a supreme value, and is the basis for the existence of humanity in the world,” the rabbis said in a statement. “We pray that no more blood be spilled and call upon people of good conscience everywhere to help aid those in need, including refugees, and end the suffering. We pray together that very soon will be fulfilled the prophecy of the Yeshaya ‘A nation shall not lift a sword against another nation, and they shall no longer learn war.'”

The emergency conference was held in the midst of a three-day study conference for Russia’s rabbis, with the participation of local and visiting rabbonim. Throughout the conference, the shluchim attended classes and workshops on the halachos they need to know to lead their communities across Russia.

Marking the conference, both of Israel’s chief rabbis and Israeli President Isaac Herzog sent letters of support and encouragement to Russia’s rabbis for their “heroic” efforts.

“You are the ones who navigate your community to [its] destination,” said Ashkenazi Chief Rabbi Dovid Lau in a letter to Russian rabbis. “I hope and pray for a spirit of peace and that you, the rabbis of the Jewish community, should be able to continue in your duties to make God’s name beloved and elevated, to bring truth and peace for the benefit of your congregations and all of humanity.”

Sephardic Chief Rabbi Yitzhak Yosef wrote to the rabbis, “The Jewish community of Russia is relying upon you spiritually and materially. This is true of both those who turn to you for halachic rulings, advice and guidance, and of those who pay attention to your actions and are influenced by them.”

Since the start of the war in Ukraine, many members of Russia’s non-Jewish clergy have voiced their unabashed support for the invasion. A smaller number of clergy have chosen to speak out against the government’s policies and leave the country. The vast majority of Russian rabbis have chosen a third approach: to remain with their congregations and communities while simultaneously calling for immediate peace and an end to the bloodshed, the Federation said.

“Our role is not to involve ourselves in domestic or geopolitics. We are shocked that some individuals not only believe that rabbis have a duty to jeopardize their communities by engaging in political activities or even to abandon their community altogether as a form of political protest,” the rabbis said in a post-conference statement.