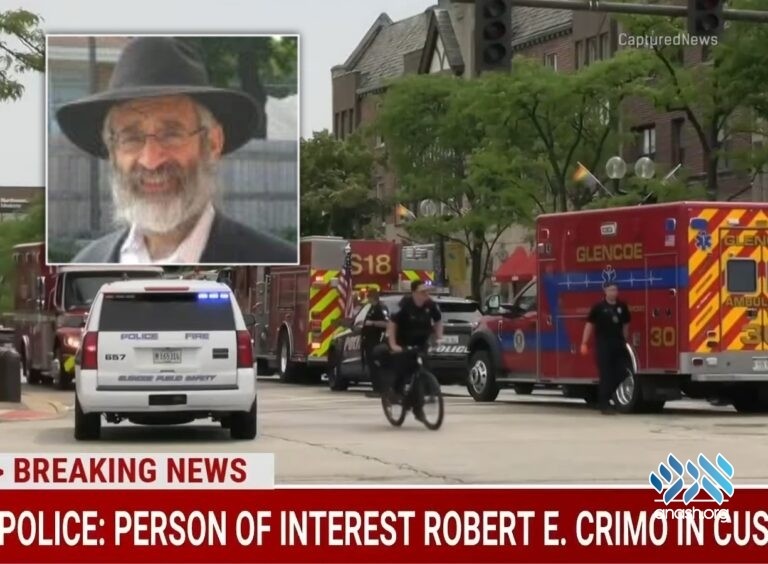 Rabbi Yosef Schanowitz, the shliach in Highland Park near Chicago, where the horrific shooting yesterday killed six people, said that the shooter had previously tried entering his Chabad House.

Following the shooting during an Independence Day parade in the Chicago suburb of Highland Park that killed at least six people, a local Chabad shliach said that the suspected shooter entered his Chabad House during the Pesach Seder.

Rabbi Yosef Schanowitz recognized the photo of 22-year-old Robert E. Crimo III released by police following the shooting, and realized he had encountered the suspect a few months earlier.

“During last Pesach, that person entered the Chabad House. We have an armed security guard sitting in front… I approached him and sternly asked him to leave as I noticed he was not a member of our community,” Rabbi Schanowitz is quoted as saying on Arutz Sheva.

Moments after the shooting, Schanowitz, whose Chabad House is located two blocks away from the site of the shooting, helped shelter people fleeing the attack including the 4 Bochurim manning the Tefillin booth.

“There is reason to think that the attack was directed against Jews due to the prominent Jewish presence in the area.” Rabbi Schanowitz said.

Later, the shliach drove to the Highland Park Hospital to visit the over 30 people injured in the incident.

Two members of the Jewish community were reported among the fatalities. Jackie Sundheim, a preschool teacher at Congregation Israel in nearby Glencoe was killed in the attack.