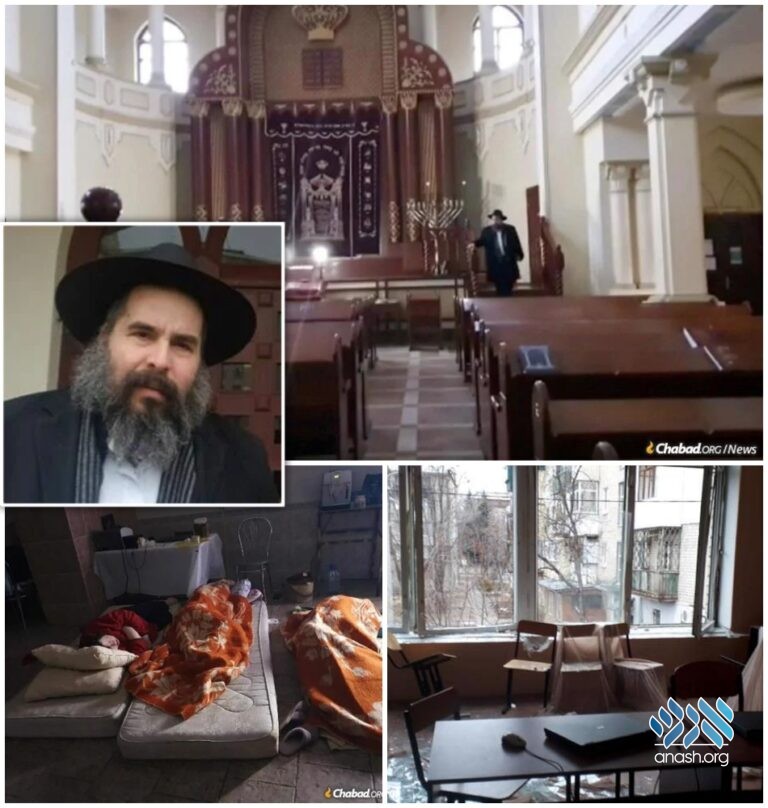 A few dozen members of the Jewish community of Kharkov, Ukraine, including a number of shluchim, made a last-minute break out of the decimated city this morning and have arrived safely in Dnipro.

A few dozen members of the Jewish community of Kharkov (Kharkiv), Ukraine, made a last-minute break out of the decimated city this morning and have arrived safely in Dnipro. The Jewish community convoy included local Chabad-Lubavitch emissaries.

“This morning we still wanted to only send our children out, but the missiles and bombs have been hammering the center of the city, and they were raining down all night. We were warned this might be the last chance,” says a tearful Miriam Moskovitz, who together with her husband, Kharkov chief rabbi Moshe Moskovitz, has directed Chabad of Kharkov since 1990. “The apartment building next to our home was shelled last night; we came out in the morning and realized how close we were.”

Russian paratroopers have since launched an airborne assault on the city.

Kharkov’s Jewish infrastructure is located for the most part in the city center, adjacent to the various government offices that Russia has been targeting. At the same time, much of the munitions they’re throwing at the city are not guided, either, making every part of the city dangerous. Chabad’s Ohr Avner Jewish Day School, which celebrated its 30th anniversary literally a day before the invasion began, was struck by artillery as well.

“There is nowhere in Kharkiv where shells have not yet struck,” AFP reported Ukrainian Interior Ministry advisor Anton Gerashchenko as saying today.

Thousands of Jewish community members have already made the trek out of the city, and many are in the process of doing it today. Rabbi Levi Raices, a Chabad emissary in the city since 1994, described the searing emotional turmoil of determining which of the many fraught options would be most beneficial for the Jewish community. “We had a hard time tearing ourselves away from the city, but at this point you can’t sleep, you can’t leave your home—we had to go,” says Raices, whose home is just down the street from the central government square and buildings demolished by cruise missiles on Tuesday. “If you’ve never felt this, I hope you don’t find out. It’s difficult to describe.”

Sandbags line the basement kitchen and dining room windows of Chabad’s Choral Synagogue in Kharkov, which continues to serve as a shelter for some 100 Jews, with available food, water, heat and sleeping space. Chabad continues to work on assisting other Jews in leaving the city.

Among the local Jewish community members who made it to Dnipro is a family who brought with them their grandfather, who last evacuated from Kharkov as a teenager in 1942, 80 years ago. “He came back in 1946 and got married with a chuppah,” his great-grandson says. “History has shown that he usually returns to his city…”

This morning the Moskovitzes headed to the synagogue to make last-minute arrangements with staff who are remaining there, with whom they remain in close contact from Dnipro. Their vehicles had to wait some time while fighting subsided and they could make a break for it. Now they are all safely in Dnipro where they hope they can wait out the war, though no one knows what the next day will bring.

Just before departing, the rabbi entered the synagogue sanctuary and kissed the parochet [curtain] of the Holy Ark, vowing to return to the city to which he was sent 32 years ago by the Rebbe.