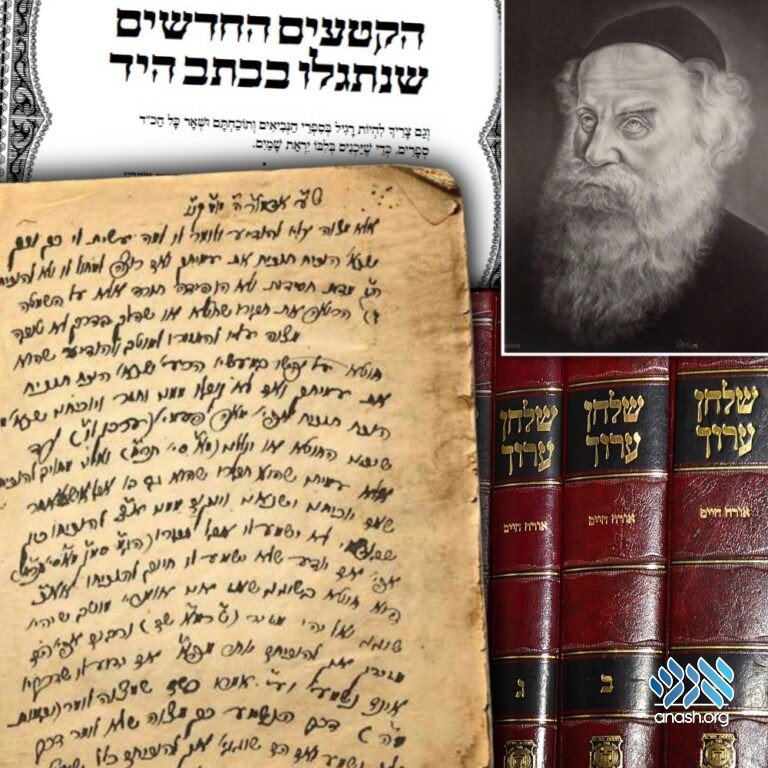 While combing through the thousands of manuscripts released by the Rebbe’s library, Chabad scholar Rabbi Avraham Alashvili discovered a momentous finding: Full paragraphs from the Alter Rebbe’s Shulchan Aruch that had never been published.

The new sections were discovered by Chabad scholar Rabbi Avraham Alashvili, one of the editors of the new edition of the Alter Rebbe’s Shulchan Aruch, and author of numerous seforim. He chanced upon the discovery while combing through the thousands of manuscripts released by the Rebbe’s library just this past week.

In an interview with Kfar Chabad Magazine, Rabbi Alashvili said that he had discovered the sections by chance.

“I was looking through a bichel – manuscript – that contained a collection of various writings, and I suddenly found a handwritten edition of part of the Alter Rebbe’s Shulchan Aruch,” he said.

The manuscript contained a previously unknown version of chapter 155 – the halachos of Torah study and chapter 156 – the halachos of business. Rabbi Alashvili, who is renowned as an expert in the Alter Rebbe’s Shulchan Aruch, immediately realized that he had discovered a treasure.

It was only in a later print that those two chapters were published. Even then, the Russian censor, who had to approve every Jewish book, removed large sections of each chapter.

The newly discovered manuscript, therefore, held a number of paragraphs that had never been printed, and remained in manuscript form for decades.

“For years, people had told me that there was no possibility that new sections of the Alter Rebbe’s Shulchan Aruch would be discovered. Baruch Hashem, we found these sections with incredible hashgacha protis, and we hope and pray that more sections will come to light,” Rabbi Alashvili told Kfar Chabad Magazine.

The full text of the new sections will be published in this weeks Kfar Chabad Magazine, and on Anash.org on Thursday.