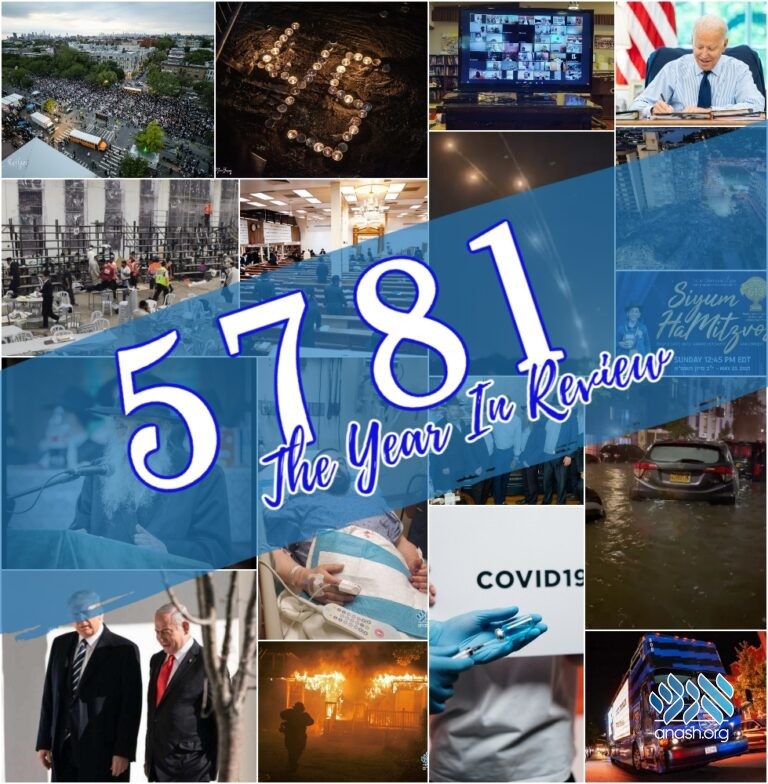 As we conclude the last moments of 5781 and prepare for the start of the new year, Anash.org remembers the tears and the joys, the hardship and hope of a year gone by.

Rosh Hashana 5781 began as 5780 had concluded, with the COVID-19 pandemic taking the central stage. In Crown Heights, the community experienced an unusually quiet Rosh Hashana, and an open-aired shul took the place of the usual Tishrei tent. Around the world, covid restrictions brought millions to attend outdoor shofar blowings in parks and public settings. Florida shluchim used live fish instead of chickens for kaporos, and for those in Melbourne, kaporos chickens flew over the locked-down community.

As Sukkos arrived, police gave tickets to those not wearing masks on Kingston Ave, but the joy of the Yom Tov could not be stifled and Simchas Beis Hashoeiva trucks reached every street in the neighborhood.

After Tishrei, children returned to school and concerns of a second wave of covid rose. Rabbonim and doctors encouraged mass testing in an effort to reverse the tide of community spread.

In a step towards world peace, Muslims in Delaware chipped in to rebuild a torched Chabad house, Dubai’s Jewish offerings increased to include steady Torah classes and kosher food, and Morocco normalized ties with Israel.

Vice President Mike Pence thanked Chabad at a roundtable event in Florida as part of his campaign tour. Americans headed to the polls to vote in the presidential elections, coming on the heels of months of contentious campaigning. As mail-in ballots were counted, Biden took the lead and was duly crowned the 46th president of the U.S.A., but not without some “action” beforehand.

Large crowds being off limits, the annual Kinus Hashluchim was held virtually, but nothing could stop the passion and energy of the Rebbe’s army. The 136-hour Zoom farbrengen lifted the spirits of shluchim around the world, and yidden everywhere were inspired by their inspiration.

As the covid-19 vaccine rolled out, halting the brunt of the pandemic and allowing life to return to a semblance of normalcy, doctors and rabbonim came out in strong support, urging chassidim to listen to the doctors on this urgent matter.

Jews of all stripes joined the Dukes family in anticipating the recovery of Rabbi Yudi Dukes a”h, celebrating each step forward, davening through each bump on the road, and ultimately mourning their tragic loss with them.

Governor Cuomo’s restrictions on shul capacity were thankfully overturned in court and flights were deplaned due to toddlers refusing to wear their masks. Yet with all the covid madness there was one welcome bonus – the stimulus checks.

Purim marked the completion of a full year since the pandemic abruptly disrupted life as we knew it, and we began to mark the yahrzeits of those we lost in those frightening days.

With some countries enforcing travel restrictions, a Paris yeshiva found their way to Crown Heights for Yud Alef Nissan by taking a two week stopover in Serbia, and shluchim in South Korea flew 11 hours to give their son a bris.

The tragic events in Meron on Lag B’omer and the 45 Jews who lost their lives at that holy time and place will never be forgotten. The next day, Lag B’Omer was marked by Chabad communities around the world and in Crown Heights, schools marched on.

As war struck Eretz Yisroel and a barrage of rockets lit up the sky, some Jews brought smiles to those scrambling to bomb shelters. On erev Shavuos, the Jewish nation was devastated once again when dozens were seriously injured in a bleacher collapse in the Karlin-Stolin shul in Yerushalayim.

After multiple elections, a new government was formed in Israel, with Naftali Bennett replacing Benjamin Netanyahu as prime minister, although a Chabad rov had slammed the left-wing government, calling it a “grave danger to the Jewish people.”

The annual Chidon Sefer HaMitzvos was a highlight of the year for thousands of children who dedicated hours of intense study preparing for the event. Organizers created a Covid-safe experience with trips, prizes and a grand finale event that left the kids excited to compete again next year.

On Gimmel Tammuz, anash around the world gathered for local Siyum HaRambam events, with the celebration in front of 770 being the largest such event in decades.

When the condo building suddenly collapsed in Surfside, the world was thrown into shock and disbelief, while grateful to hear that one family escaped just moments before it fell. The frum community hoped and prayed for further miracles, deeply saddened by each loss that was uncovered as rescue teams sifted through the rubble. The Shul of Bal Harbour was transformed into a relief epicenter, and President Biden met the shluchim to thank them for their efforts.

Anti-Semitism struck this summer in Boston, when a shliach was stabbed multiple times outside his Chabad House. He miraculously survived without serious injuries and was released from the hospital the next day.

With the urging of Crown Heights activists, rabbonim, and leaders of shuls and schools, the community turned out in record numbers to vote in the Democratic Primary Elections, taking a powerful step towards influencing political decisions that affect their lives and thwarting the victory of an anti-Semitic candidate.

The Chabad community, among countless others, was thrown into mourning by the passing of Reb Yoel Kahn, the Rebbe’s chief chozer and foremost teacher of Chassidus in the generation. A number of projects were announced in his memory, including the building of a new Chassidus center in Boro Park.

As the year reached its end, New York was flooded by the remnants of Hurricane Ida causing severe property damage to many as they prepared to greet the new year.

May we merit to welcome Moshiach while still in these last few moments of 5781 and forever remember this year as the year that the world was transformed into a place of everlasting peace and prosperity for all.

With best wishes for a Kesiva v’chasima tova to you and yours,