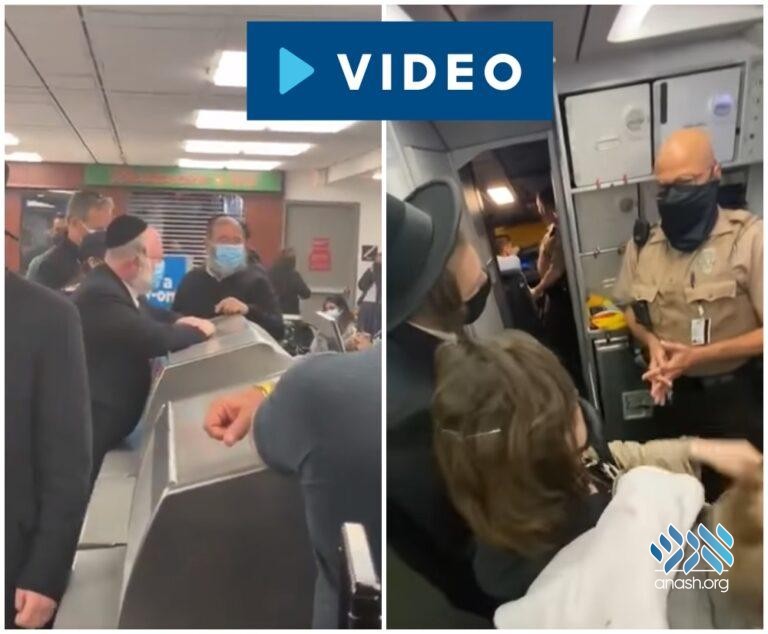 A disturbing incident unfolded last night on a Frontier Airlines flight as staff ordered a Jewish couple off the plane because their 18-month-old had no mask. The ADL has called for a full and transparent investigation.

Frontier Airlines has been accused of anti-Semitism after removing a Jewish family from a Miami to LaGuardia flight on Sunday night over allegations that their 18-month-old infant wasn’t wearing a face mask, Hamodia reported.

The airline denied the incident erupted because of the infant and said the family was removed because “members of a large group, including adults, refused to wear masks.”

Meanwhile, video footage has since emerged of the family being removed from Frontier Airlines flight F9-2878. During the time that the video was taken, all of the family members are seen wearing approved face coverings except for the infant.

After other passengers got involved in the dispute, Frontier Airlines ended up deplaning the entire plane and the flight was eventually canceled after tensions continued to simmer in the gate area.

Fellow passengers said that the child seemed to be the reason for the family’s removal.

“We were all on the plane when they [flight attendants] came on and saw the 18-month-old baby without a mask,” Hershey Greenbaum told The New York Post.

In video footage of the incident, the father can be seen explaining that the child was under the age of two.

The parents told the attendants they would try to fit a covering on the baby, according to Greenbaum, but that not did not stop them from taking action.

“All the people on the plane were getting really mad and rowdy because, what are you going to do? It’s an 18-month old baby,” Greenbaum said.

“Most of them were saying, ‘Don’t let them do this to you,’” Greenbaum said of the other passengers. “Most of the people were against it, Jewish or not Jewish, why are you picking on an 18-month-old kid?”

Applause can be heard as the couple started leaving. Travels say on camera that the applause came from staff who also cheered that “we did it.”

Frontier responded to the allegations in a statement released on Twitter saying: “Members of a large group, including adults, refused to wear masks as flight 2878 was preparing for departure from MIA-LGA. Repeated requests to comply with federal law necessitated their removal from the flight. The issue did not stem from a child under 2.”

The flight was eventually canceled and passengers were booked on alternative flights.