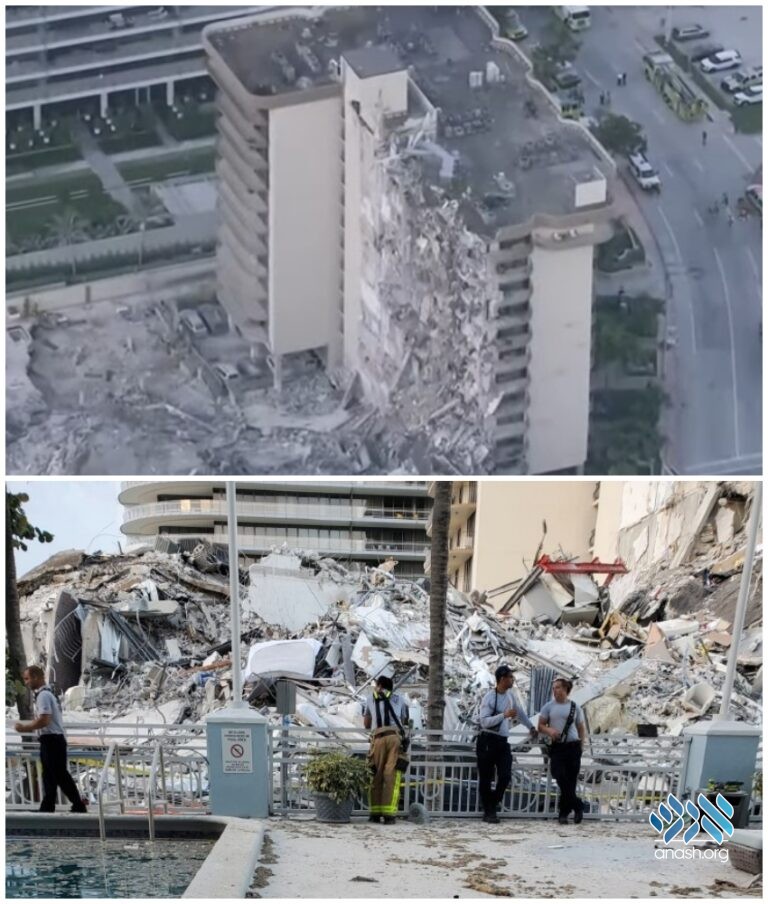 At least 1 person was killed and 10 others injured when the Champlain Towers South condo in the Surfside, Florida partially collapsed in the middle of the night.

A massive search and rescue effort is underway following the collapse of a 12-story condominium building in Surfside, Florida early Thursday.

Miami-Dade Fire Rescue officials said more than 80 units responded to the collapse at the condominium building near 88th Street and Collins Avenue just north of Miami Beach around 1:30AM.

Hatzalah of South Florida was dispatched to the scene and has been working closely with Miami Dade Fire Rescue Command.

Highly credible sources tell YWN that people are missing, and an exact number is not known, but it includes 8-9 Jewish people who are unaccounted for.

Chesed Shel Emes along with Police Chaplain Rabbi Mark Rosenberg are also on the scene working with authorities trying to track down missing victims.

“We’re on the scene so it’s still very active,” said Sgt. Marian Cruz of the Surfside Police Department. “What I can tell you is the building is twelve floors. The entire back side of the building has collapsed.”

The collapse sent a cloud of debris through the neighborhood, coating cars up to two blocks away with a light layer of dust.

Photos and video from the scene show the collapse affected half the tower. Piles of rubble and debris surrounded the area just outside the building. The department has yet to say what may have caused the collapse near 88th Street and Collins Avenue.

The area is a mix of new and old apartments, houses, condominiums and hotels, with restaurants and stores serving an international combination of residents and tourists. The community provides a stark contrast from bustle and glitz of South Beach with a slower paced neighborhood feel.

Update: A total of 55 apartments collapsed. Firefighters have so far rescued 35 people trapped inside the building. Search and rescue ongoing.