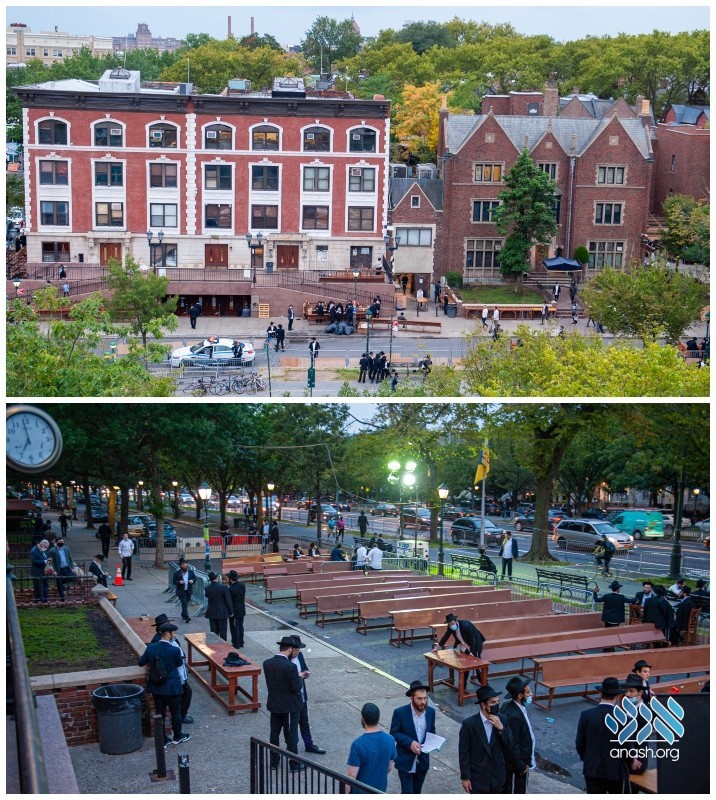 The community of Crown Heights experienced an ‘unusual’ Rosh Hashana, unlike any they had experienced before. Locals and guests told Anash.org about their experiences and their feelings.

“I’ve had all types of experiences on Rosh Hashana throughout my life, but this year will stand out.”

That is how one Crown Heights resident described Rosh Hashana 5781, under the shadow of the global COVID-19 pandemic, the resulting strict health regulations and the limited amount of guests.

“The first thing that I noticed was how empty 770 was Erev Rosh Hashana,” one local told Anash.org. “In usual years there are thousands of people davening, saying hataras nedarim and milling about. This year, only about 150 people stood outside 770, with some more standing inside.”

The usually packed streets, stores and mikvaos were largely calm this year, with almost only familiar faces to be seen.

One bochur said that his biggest shock came by ma’ariv on Rosh Hashana.

“I came in to 770 expecting it to be jammed-packed, as it was every other year that I davened here. Instead, there was a lot of room to move around, and people were walking up and down the aisles without even having to ask anyone to move aside,” he said.

Due to regulations released by the gabboyim before Rosh Hashana, over half of the benches were removed, and the remaining benches were rearranged, leaving large sections of 770 for standing room. Hundreds more davened outside with a large minyan arranged and run by Rabbi Yosef Yitzchak Kratz.

Others attempted to daven in the Rebbe’s room as they in past years, but were disappointed when they were adamantly refused entry. Only select individuals were allowed in, and others had to make do with davening on the lawn while listening in through the open windows.

The day of Rosh Hashana continued in a similar vein. The big shul in 770 was not much fuller than a ‘regular’ Shabbos, with much room to move around near the back and under the women’s section. Many purchased seats remained empty as well, until bochurim took advantage and sat in them.

Nearly every single person in the Shul had a face mask on the entire time they were indoors; a person without a mask was an anomaly, instead of the opposite.

Besides for the main minyan inside and the large minyan on the Eastern Parkway service lane, smaller minyonim took place in the Sukkah area and other locations near 770.

The second day followed the same pattern as well, with only a slightly bigger crowd arriving for tekios. Crowds also gathered for the hourly shofar blowing on the corner of Eastern Parkway and Kingston, while maintaining social distancing.

“All in all, between Rosh Hashana falling out on Shabbos with no tekias shofar, which hadn’t happened in 11 years, together with the very limited amount of guests, it almost felt like a regular Shabbos,” said Yossi L. “On the other hand, it was heartwarming to see the entire community’s obedience to the instructions of the Rabbonim and doctors, while at the same time doing whatever they can to spend some time in the Rebbe’s shul in a safe manner.”