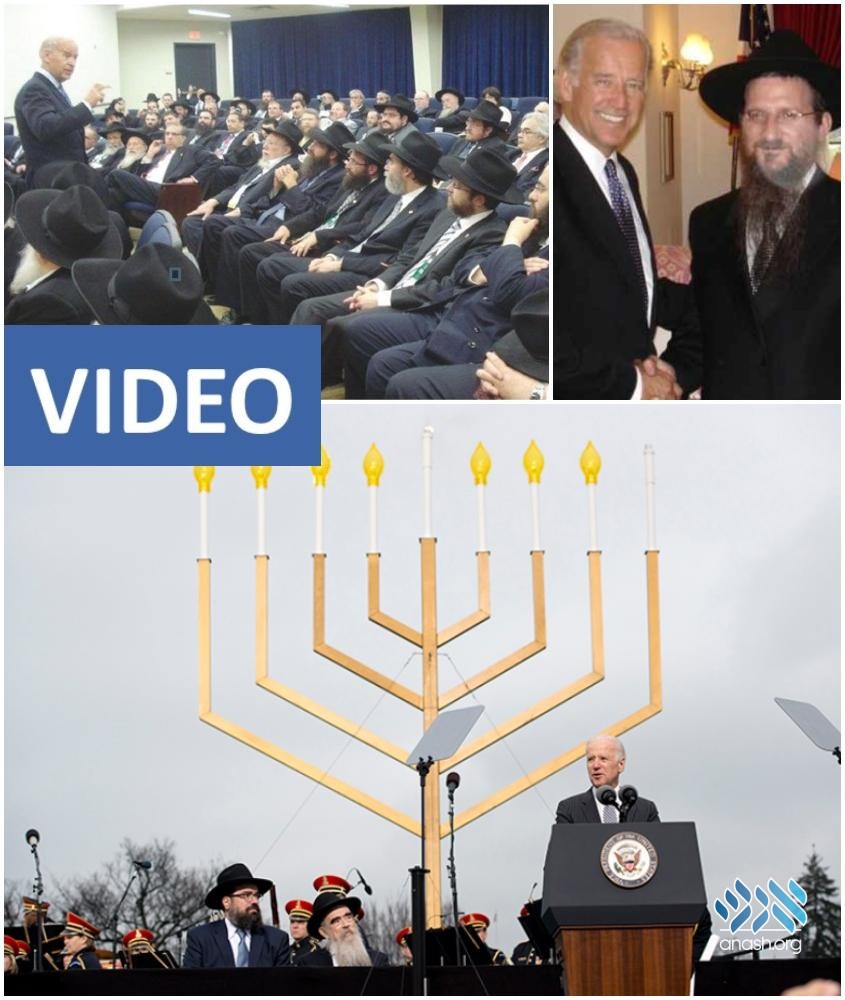 President-Elect Joe Biden, who is set to take the White House this coming January, has a decades-long history of working with Chabad shluchim and the Jewish community. On more than one occasion, he even quoted the Rebbe…

The long-drawn out US Elections are finally nearing their end, as former Vice President Joe Biden was declared winner of the race to become the 46th president of the United States.

President-Elect Biden is not a new face in politics, with close to five decades in public service, first as a senator from the State of Delaware, then as vice president of the United States under President Barack Obama.

When Biden was first nominated to be Obama’s running mate in 2008, Lubavitch.com interviewed shluchim from him home state of Delaware about his relationship with the Jewish community throughout his decades in the senate.

At the time, Rabbi Chuni Vogel, shliach in Wilmington, told them that “Senator Biden has always been very friendly. We always knew that we had a friend in him and could turn to him should the need arise.”

David Margules, president of Chabad of Delaware, agreed with those sentiments. “Within the Delaware Jewish community Biden is very well-thought of and liked. He has developed the reputation for being a strong supporter of Israel,” he said in the 2008 interview.

He also recalled Biden’s message of support when Chabad of Delaware celebrated its ten-year anniversary. “[Chabad] is one of the state’s most important examples of charity, community service, and spiritual uplift and a testament to what G-d’s people can do when called upon,” the then-senator wrote at the time.

In the run-up to the 2008 elections, Obama picked Biden to be his running mate, and upon their victory, Biden was appointed to the office of Vice President on January 20th 2009.

Just over a year and a half later, Biden held a meeting with a group of over 100 Chabad shluchim who were in Washington D.C. for two days, meeting with a large number of elected officials.

At the meeting, Biden reviewed Chabad teachings he had acquired over the years, including the necessity for “wisdom, knowledge and understanding,” referring to the acronym of CHaBaD – chochma, bina and da’as. According to a report in the Jewish Journal at the time, Biden then went on to explain how “wisdom, knowledge and understanding” could be applied to statecraft.

Biden’s most public acknowledgment of Chabad and the Rebbe’s teachings came after him and Obama were reelected for a second term in 2012. Two years later, in 2014, the vice president personally attended the lighting of the National Menorah, the highest ranking member of a presidential administration to do so since President Jimmy Carter attended in 1979.

At that event, Biden emphasized the centrality of Jewish values to American life, and quoted a teaching in the name of the Rebbe to stress the need for constant growth.

“I want to give special thanks to Chabad for hosting this event,” said the vice president. “The Lubavitcher Rebbe taught us that every living thing must grow. And just as the Chanukah lights will grow from the first day to the eighth, just as even those who have achieved good and holy things must never be satisfied with what they’ve achieved yesterday, may you all go from strength to strength.”

Expounding upon the Rebbe’s teachings about the continued growth and vitality of a living organism, Biden posited that the age-old “Jewish notion of religious freedom, of safety in your land, of being treated with dignity in your own community,” went on to become “the bedrock” of the United States of America.

“Jewish heritage, Jewish culture, Jewish values are such an essential part of who we are [in the United States], that it is fair to say that Jewish heritage is American heritage,” he said.

The famous saying, based on a possuk in Mishlei, tells us that “לב מלכים ושרים ביד ה” – “The hearts of kings and ministers are in the hand of Hashem.” At this time of transition between one government and the next, we daven that Hashem will give President-Elect Joe Biden the wisdom, courage and moral clarity to lead the USA, and by extension, the entire world, in a manner consistent with the vision set out by the Rebbe for all of makind.