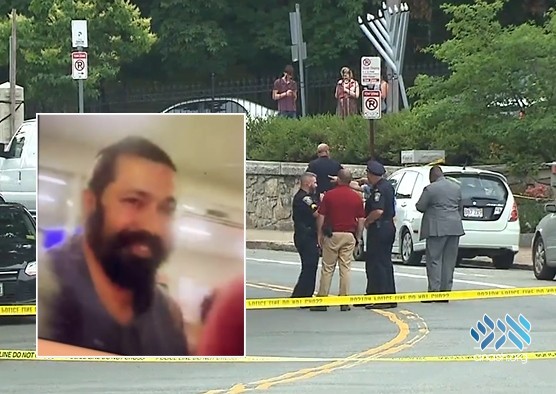 Rabbi Shlomo Noginski, the Boston shliach who was stabbed multiple times outside the Shaloh House in Brighton, Massachusetts, was discharged home from the hospital overnight. Doctors called it a “big miracle”.

Rabbi Shlomo Noginski, the Boston shliach who was stabbed multiple times outside the Shaloh House in Brighton, Massachusetts, was discharged home from the hospital overnight.

Surgeons at the local hospital who operated on Rabbi Noginski following the attack called it a” big miracle”.

Boston Police have arrested Khaled Awad, 24, of Brighton, MA in connection with the attack. He is expected to be arraigned in Brighton District Court on charges of Assault and Battery by Means of a Dangerous Weapon and Assault and Battery on a Police Officer.

“I am grateful to the Boston Police Department for their rapid response and relieved that the perpetrator is in custody. I am looking forward to returning to my work as soon as possible,” said Rabbi Noginski from his hospital bed.

According to a report, Noginski was sitting on the front steps of the Shaloh House on his cell phone. The suspect approached him, drew a gun and asked Noginski to take him to his car. When the suspect attempted to force Noginski into the car, the rabbi tried running across the street to a small park called Brighton Common, where the suspect stabbed Noginski multiple times in the arm. As the rabbi tried to fend off the attacker he raised a commotion, finally causing the suspect to flee. The suspect was apprehended by police almost immediately.

Rabbi Dan Rodkin, director of Shaloh House, said: “We are moved by the outpouring of support from the community. We are working closely with Law Enforcement to get a clearer picture of what happened, and will not comment on the motive while the investigation is ongoing.