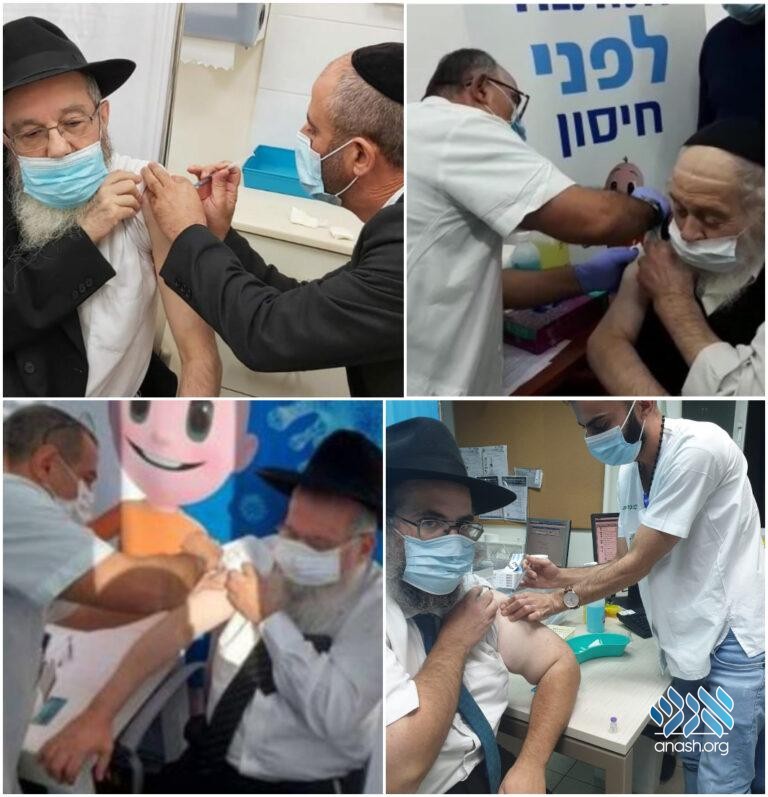 The Israeli Government’s COVID-19 vaccine program began with the vaccination of prominent individuals to reassure the public of its safety. Among those chosen were a number of Chabad rabbonim and activists.

The Israeli Governments COVID-19 vaccination program began this week with the vaccination of prominent individuals from a wide range of sectors to reassure the public of the safety of the new vaccine.

The first person in the country to get the shot was Prime Minister Bibi Netanyahu, followed shortly afterward by President Ruvi Rivlin and Health Minister Yuli Edelstein.

A number of high-profile individuals in various Frum communities received the jab as well, including former Chief Rabbi Yisrael Meir Lau, the Gerrer Rebbe, and Harav Gershon Edelstein, one of the leading authorities in the Litvishe world.

In Chabad communities across Eretz Yisroel as well, leading rabbonim and prominent activists were among the first to receive the vaccination and encouraged others to take it as well.

Among those seen on camera taking the vaccine were Harav Eliyahu Yochanan Gurary, Chief Rabbi of Cholon, Rabbi Dovid Nachshon, head of the Chabad Mitzvah Tanks in Eretz Yisroel, and Rabbi Nachum Goldshmid, a prominent Chabad activist and shliach to Netanya.

On Tuesday, Harav Yitzchak Yehuda Yaroslavsky, rov of Kiryat Malachi and head of the Beis Din Rabbonei Chabad of Eretz Yisroel, joined the list of those who agreed to take the vaccine early.

“I specifically came to take the vaccine early to encourage other people to take it as well,” Rabbi Yaroslavsky after getting the shot.

Israel’s vaccination drive will continue in full force over the coming weeks. After inoculating those over 60, Israelis working in jobs with a high risk of exposure to the virus, such as teachers, social workers, first responders, and prison staff (prisoners will also get priority); and Israel Defense Forces soldiers and other security personnel will be vaccinated.

In America, widespread vaccinations are still weeks or months away from happening, and as such Chabad rabbonim have not yet weighed in on the matter.