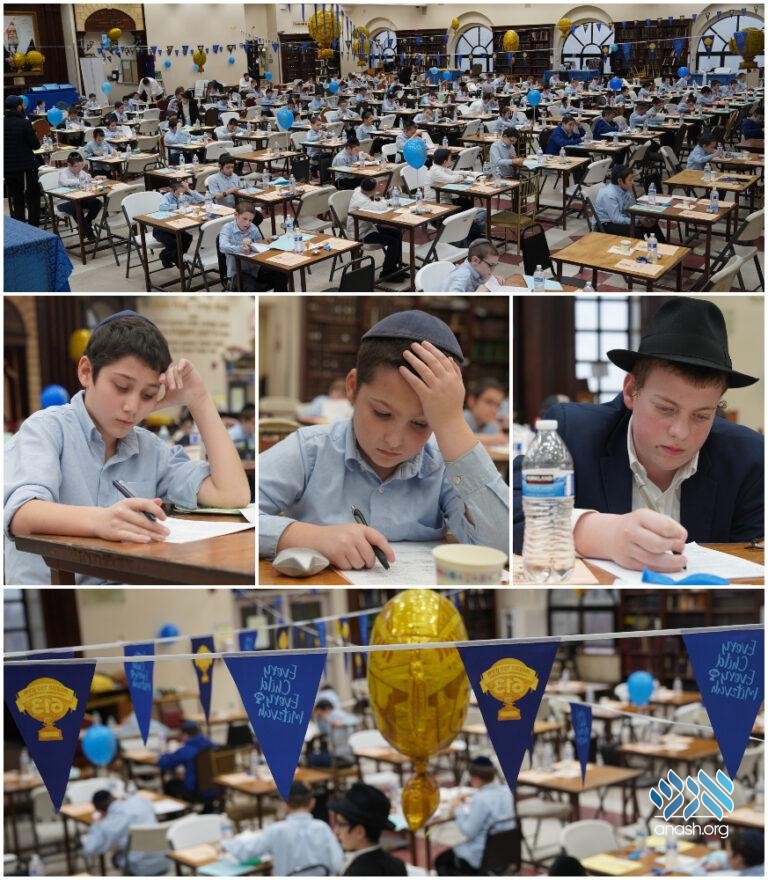 After months of study, hard work and tests, 250 students from Oholei Torah gathered in the Zal Beis Medrash for the grand final of the Chidon 5781, quizzing their knowledge on over 100 mitzvos.

After months of study, hard work and tests, 250 students from Oholei Torah gathered in the Zal Beis Medrash for the grand final of the Chidon 5781, quizzing their knowledge on over 100 mitzvos.

Over the past four months, over 5,000 students from schools in 33 countries have been studying, reviewing and taking tests on the material for the Chidon. During the past weeks, children have been spending their breaks, recesses, and time at home to prepare for the final to ensure their award during the Chidon of 5781.

Finally, the the hard work of the thousands of children culminated with a grand final on the entire Yahadus book that they learned during the year.

In Oholei Torah school in Crown Heights, over 250 children from grades 5-8 qualified for the final. On Thursday, they gathered in the Zal Beis Medrash, which was festively decorated with Chidon streamers and balloons for the occasion.

“What is most incredible about the test is the scope of it, a detail some don’t realize,” Rabbi Shimmy Weinbaum, general of the Chayolei Tzivos Hashem brigade, told Anash.org. “Each mitzvah box has approximately six components the child must remember; the name, who it applies to, the source, etc. In addition, there is an average of ten details per unit. That means that each child was tested on over 1,500 mitzvah specifics!”

After the tests are marked, every child who received a passing mark will be getting a reward from Chidon Headquarters. For a 60% mark, children receive a certificate. 70% gets them a plaque, and 80% a stage plaque, and 90% gets them a medal and a mention at the grand Chidon Event.