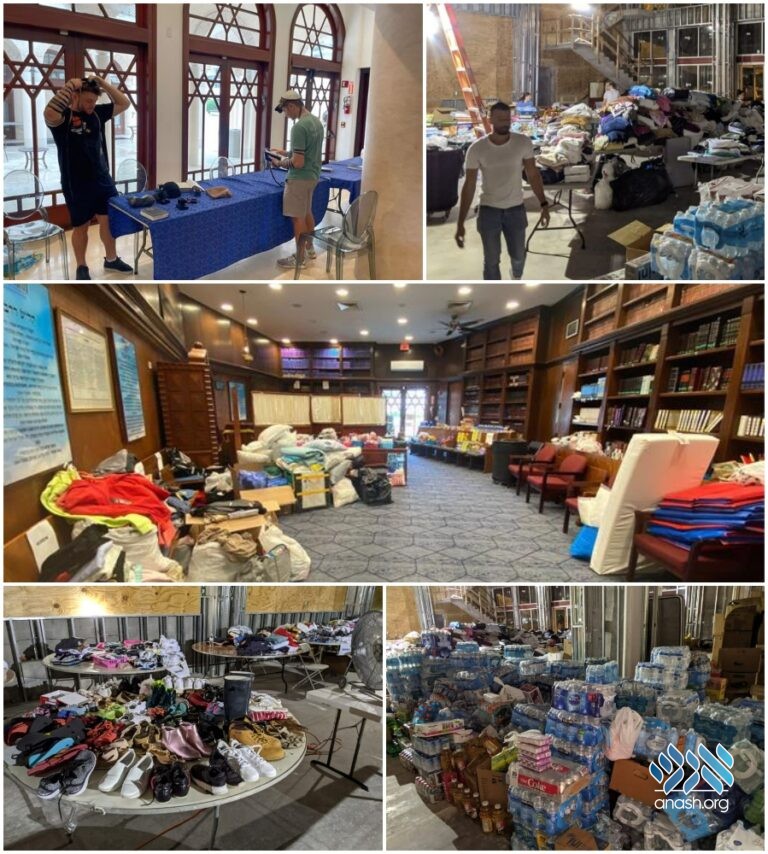 As soon as the news came out of the collapse of Champlain Towers South in Surfside, the Shul of Bal Harbor, which is blocks away from the scene, has been transformed into a whirlwind of activity, with thousands arriving to donate supplies, food and home goods.

In the surreal hours since the collapse of Champlain Towers South early Thursday morning, the Surfside/Bal Harbour Jewish community has pulled together to do whatever it can to alleviate the difficulties faced by now-homeless survivors, including the injured, as well as family members flocking to the town in the hopes of a miracle.

There are three centers of activity in Surfside. There is the site of the devastation, where search and rescue teams have been gingerly working since Thursday evening; the Surfside Community Center, where worried families were gathering for updates from officials (on Friday afternoon the Family Relocation Center was relocated to the Grand Beach Hotel); and the sprawling Shul of Bal Harbour, the Miami-area Chabad-Lubavitch center opened by Rabbi Sholom and Chanie Lipskar in 1981. It was the Lipskars who founded Jewish life in the area, and the Shul has been the epicenter of the community since its inception.

Like nearly all Chabad centers, the Shul community is diverse, drawing Jews from across the spectrum of observance. Among the many who call it home are Modern Orthodox Jews, Chabad Chassidim, Latin American Sephardim, Jews who identify with various denominations and those who don’t affiliate at all. The Shul hosts an array of prayer services catering to its many different constituencies, including a beginner’s service and a separate Sephardic one.

After the news broke around the world, the Shul became inundated with calls from fearful family and friends seeking information about their loved ones—calls that continue to pour in before the start of Shabbat.

“Our emergency hotline has transferred to … 305-868-1411,” the Shul’s homepage currently states. “If you have already left a message with names, you will be contacted with updates as they become available. If you have a new person to add to the list, please include their name, age and apartment number, as well as your contact information. … Our thoughts and prayers are with the victims and their families. May Hashem comfort and console them at this sad time.”

An emergency 8777 Collins Avenue Relief Fund was immediately created to disperse help directly to families. As of Friday, more than $750,000 has been raised.

In person and on national television, Lipskar has echoed the words of the Rebbe who rejected any and all explanations for tragedy. In the aftermath of a 1956 terror attack in Kfar Chabad, Israel, the Rebbe insisted that while “we should not allow ourselves to” sink into depression or helplessness, there were no words, spiritual or otherwise, that can give reason to the loss. Instead, the Rebbe pointed to the reaction of Aaron the High Priest to the death of his two sons: silence.

There will come a time to react, to build and to expand. For now, there can only be empathy and silence.

An Outpouring of Support

The outpouring of love and support from the area can perhaps be seen nowhere more vividly than inside the Shul itself. The massive shul complex, built in 1987, is nearing completion of a $20 million expansion and stretches blocks—to 125,000 square feet. As Shabbat approaches, local Jewish community members have filled it with an endless amount of items, including mattresses, tablets, board games, phone chargers, fresh and frozen food, clothing and even microwave ovens—anything and everything to make life a bit easier for those affected by the tragedy.

Both survivors and families flooding into Surfside have come in and out of the Shul for the past two days to pick up items as needed. The Red Cross has also been making use of the copious supplies stockpiled at the Shul, regularly picking up necessities for victims being housed and cared for at other sites.

The Shul has also been the base for Hatzalah emergency responders and grief counselors.

In addition to fielding calls, the Shul’s staff has been working overtime to arrange emergency housing for those displaced from their homes and for families who have been arriving in Surfside before Shabbat as the search for the missing continues.

Food and supplies from the Shul were also being delivered hourly to the Surfside Community Center, a municipal complex with a public pool and other amenities, where emergency services, volunteers and family members were gathering until now. All of that aid has now been directed towards the Grand Beach Hotel, where crews and volunteers are continuing to assist families looking to locate their loved ones.

Meanwhile, the Champlain Towers complex is cordoned off for blocks, and aside for the search-and-rescue teams, the only people on site are members of Chesed Shel Emes, a Jewish rescue team, and area Chabad rabbis, whose community members are among the missing.

The dozen or so Chabad rabbis at the Shul of Bal Harbour have gone from one location to another, bringing with them tefillin for prayer and warmth in their hearts.

“There isn’t anything to share,” an area Chabad rabbi said as he headed back to the site of the tragedy. “All anyone can do at this time is show empathy, to show people that they’re not alone in the world. Because that’s what this feels like for them, a terrible loneliness. We need to really be there with them.”

Indeed, a feeling of uncertainty has gripped Surfside. While bracing for the worst, the Jewish community is also praying for miracles. No one knows what the next few days will bring, but one thing is clear: When tragedy struck, Surfside/Bal Harbour exhibited the true meaning of community.