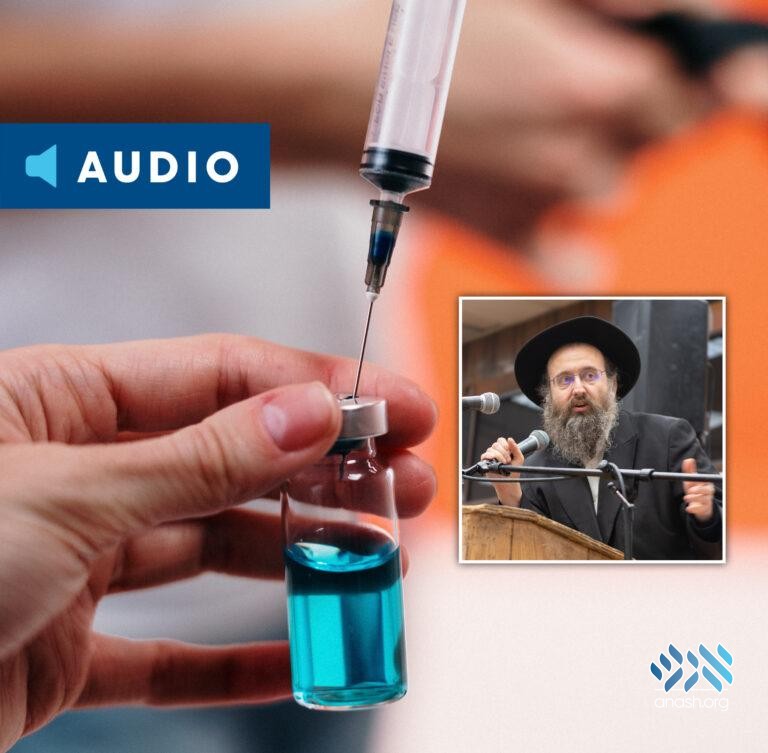 In a recording sent out on Friday, Crown Heights Rov Yosef Braun addressed the question of the Torah’s approach to the COVID-19 vaccine, and who one should trust with regards to such questions. Anash.org presents a full transcript.

In a recording sent out on Friday, Crown Heights Rov Yosef Braun addressed the question of the Torah’s approach to the COVID-19 vaccine, and who one should trust with regards to such questions.

Anash.org presents a full transcript of the recording for the benefit of the Chabad community worldwide.

Over the last year, we’ve been receiving a lot of questions from people in matters associated with refuah. And while it’s very clear that the domain of refuah belongs to the doctors, people have often asked shailos, clearly, which are of non-halachic nature.

People are confused. Generally, golus is a state of confusion. We are lost and confused in this bitter golus but yet we have a Torah and the Torah is Torah Ohr, the Torah gives us light. There’s no room for an excuse to say, I don’t know what to do and I’m mixed up. And I don’t know if I should do A or B and some friends are pushing me in this direction, and some in that direction. We have a Torah. It is clear that we follow the guidelines of Torah. We have Ohr, l’chol bnei yisroel haya ohr b’moshvosam, even during golus, we can see clearly ner mitzvah v’Torah ohr, see clearly what’s the path, what we’re supposed to do. Sur me’ra v’asei tov. Es hama’aseh asher yaasun, what is the correct approach. And often, the reason why there’s a lot of confusion is because we’re not going to the Torah to find out what the correct approach is, and we’ll coming up with our own theories.

The Torah made it very clear that when it comes to inyonim of refuah – of medicine, it is not up for us to make our decisions- what we think is right. And it’s certainly not up for us to do research. We’re not qualified to do research, Torah gives special credence to mumchim – to experts in their field, way beyond science does. In a number of letters, the Rebbe writes that Torah believes more in science than science believes in itself. Because the Torah tells us that when it comes to the words of a professional “uman lo mareih umonaso” – we have a klal that a professional is reliable and credible when it comes to his profession. A professional has a very high standard of belief. And when it comes to doctors – doctors’ words are to be trusted. We put aside Shabbos, we put aside Yom Kippur when it comes to a matter of pikuach nefesh. And how do we determine if it’s pikuach nefesh or not – very often based on what doctors are saying. And the definition of a doctor is a doctor who’s a mumche, who’s a professional

Often, the Rebbe would tell people to go to a rofeh yedid – to a doctor who is a friend could advise you what’s best for you, but certainly the doctor has to be a professional in his field. And as the poskim say, going back to the Beis Lechem Yehuda, and many other poskim, that doctors should be doctors that are licensed by the government because the government has a licensing system of which doctors are quacky doctors and which doctors are real. There’s a whole range of conspiracy theorists out there who have a lot of interesting things to say, usually based on anecdotal evidence, not based on thorough research. There’s peer-reviewed research. In academic circles, there are certain standards which things qualify, and which things don’t qualify. The average layperson, even after reading a thorough study will not know the difference between teven and bar will not know what the authentic and what’s not authentic and will often take things out of context.

The Torah is not asking us to make studies. The Torah not asking us to go onto WhatsApp groups and listen to every single rumor and shmuah that you hear out there. The Torah is very clear when it comes to a question about refuah and particularly for talking about an issue, which some people say is an issue of life or death, and other people also say also it’s an issue of life and death chas v’shalom, but in the other direction! For example, should you take this vaccine to protect your life, or should you chas v’shalom not take this vaccine because of some potential possible side effects which this vaccine might have. How do you know what’s correct and what’s not correct? What’re quacky signs and what are real signs. How do you know how to identify?

It is not your job to go and do research. It actually indicates a lack of bitachon when you start worrying about this and worrying about that and Googling it and looking it up and looking at Wikipedia to see what someone else wrote, which you could have written also. Emunah and bitachon tell us that you have to trust in the Eibishter, that the Eibishter knows what’s good for us. And he gave us a Torah which is a Toras Chaim, and he told us what to do. And the Torah says, yes, we should trust our doctors. That’s what the Torah says. Of course, doctors are human and doctors could have other motives – the same way that rabbonim are human and could have other motives. But the Torah says, when it comes to a matter of Halacha – “Ki yipalei mimcha davar lamishpat” – if a person has a question in Halacha he should approach his rov – asei lecha rav.

When a person has a question of refuah, he’s supposed to approach a doctor. The same doctor, that a person would go to for any other area, the doctor that you would trust chas v’shalom for heart conditions or for yene machla or for whatever it is. That same type of doctor is the one you should be going to asking the particular question that’s affecting you and us right now. And you should accept the doctor’s decision with humility without trying to second guess and understand what his motives are. This theory that all doctors all have a hidden sinister agenda and all hospitals and all countries vechulu vechulu…besides for being such a conspiracy theory which really holds no water, also is not that derech haTorah.

When it comes to matters of hachayim v’hamoves biyad Hashem, – to paraphrase a possuk, and when we follow the horaois of Torah, the horaois that the Rebbe told us – and the Rebbe told us time and time again, to ask when it comes to matters of refuah – the Rebbe said that if we want to ask him a question, we should ask the doctors, the Torah gives reshus l’rofeh l’irapei. And therefore if we ask our questions of Halacha to rabbonim, our questions of avodas Hashem to a mashpia – asei lecha rav, questions in parnassa to yedidim mevinim and questions in refuah to rofi’im, that is considered my answers, the Rebbe said, pretty much words to that effect.

As a matter of fact, parenthetically, the controversy regarding vaccinations and the potential sakana of vaccinations has been addressed hundreds of years ago by the poskim- the Zera Emes, the Tiferes Yisroel and so on and so forth. And they were talking about vaccinations which were not researched to the extent they are today. And the current vaccine has been researched more heavily than even vaccinations from a couple of years ago. Certainly, the primitive methods of research or vaccines that they had in those days, were not as advanced as we have today.

But be that as it may, as I said, I’m not taking the position in that matter. That is not my field of expertise. In the same way I’m telling others that they shouldn’t do their research, I’m not taking a position unless there’s a specific Halachic question. But it is incumbent upon people to go listen to doctors.