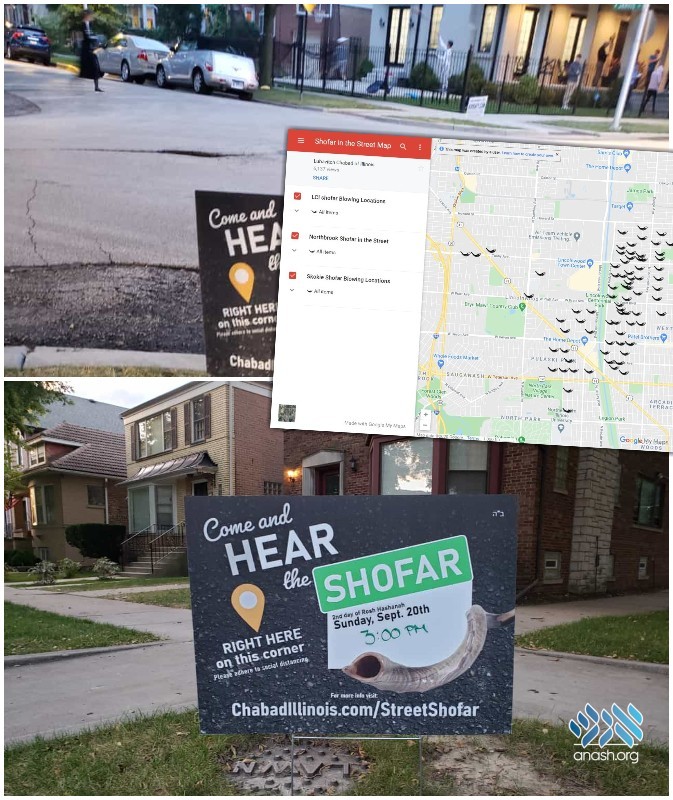 Despite concerns about many missing shul and shofar this Rosh Hashana, outdoor shofar events filled that need and exceeded all expectations.

When the Montreal synagogue that Jennifer Sailofsky and Brian Gutenplan usually attend with their children abruptly canceled Rosh Hashanah services just hours before the onset of the holiday, they knew that come what may, they would hear shofar.

And hear shofar they did, along with their children and parents, and hundreds of others in a park near their home in the heavily-Jewish suburb of Dollard-des-Ormeaux.

“It was absolutely perfect,” gushed Sailofsky, “it brought a sense of normal and tradition in such odd times!”

They were among the 800 people who heard shofar from Rabbi Leibel Fine, who, together with his family, trekked 16 kilometers shofar-in-hand to five parks and numerous private homes on Rosh Hashanah afternoon.

According to Fine, more than 10,000 people heard shofar at more than 102 public shofar services scattered around the Island of Montreal, as well as at hundreds of home visits or impromptu blowings in parking lots or on street corners.

The services were listed on a specially built website, shofarmontreal.com, which included blowings organized by Chabad Houses and other congregations, provided that they were safe, open to the public and did not require pre-registration.

On an international scale, thousands of public shofar blowings in cities around the world were listed at www.chabad.org/shofaroutdoors, providing Jews all over the world with an easy way to find a socially-distanced shofar blowing near them. Chabad.org’s global directory was publicized in pre-Rosh Hashanah news reports in media worldwide, ensuring that awareness of the public blowings spread across the Jewish communities on six continents.

Montreal was far from unique. From Johannesburg to Jerusalem, millions of Jews heard shofar outdoors, where they could safely fulfil the mitzvah without subjecting themselves to increased risk of contracting COVID-19.

In Johannesburg, Chabad House circulated a QR code, which took people to an online platform where they could enter their details, requesting either a home visit or information about their closest socially-distanced public shofar service. They also distributed shofars and provided an online shofar-blowing course, so that people could blow shofar for themselves and their families.

Local guidelines allowed synagogues to hold services for no more than 50 attendees and for no longer than two hours.

In the Johannesburg suburb of Savoy, Chabad Rabbi Eitan Ash conducted four consecutive truncated services to allow as many people as possible to attend. But many could not. To serve them, he teamed up with the two other congregations in the area to dispatch 15 teams, who blew shofar for more than 300 residents.

“Due to ill health I was unable to attend Rosh Hashanah services,” attests Savoy resident Gary Soicher, who was home alone with his elderly mother for the holiday. “Rabbi Ash popped by and the two of us were the recipients of his shofar blowing. It was an uplifting and spiritually enriching experience.”

In Chicago, the major campaign was branded as Shofar on the Street, and it featured shofar blowings on 150 street corners, which attracted approximately 4,000 attendees, some of whom gathered on the sidewalk, and others who listened through open windows.

Several weeks before Rosh Hashanah, lawn signs were placed on all corners where shofar would be blown, each one marked with the time when shofar would be sounded there, ensuring that everyone in the heavily Jewish neighborhoods would be aware of a shofar-sounding within a five-minute walk from their home.

Blowing shofar in parks, street corners, in hospitals, prisons, elderly-care facilities, military bases or nearly anywhere else you can think of—is nothing new for anyone influenced by the Rebbe who launched his Shofar Campaign prior to Rosh Hashanah of 1953 (5714). At the time, there was almost no concept of bringing Judaism to the streets or wherever else Jews found themselves. Indeed, it appears the Shofar Campaign was a Chabad pilot program of sorts, a forerunner of the many mitzvah campaigns that would follow in the years to come.

“The campaign was a success beyond our wildest imagination,” says Rabbi Eliyahu Rapoport, who coordinated the effort in Chicago. “The trick will be when that next year, when G‑d willing people are back in the synagogue, the Jewish nation will continue to share the same care and concern to ensure that every Jew hears the shofar.”