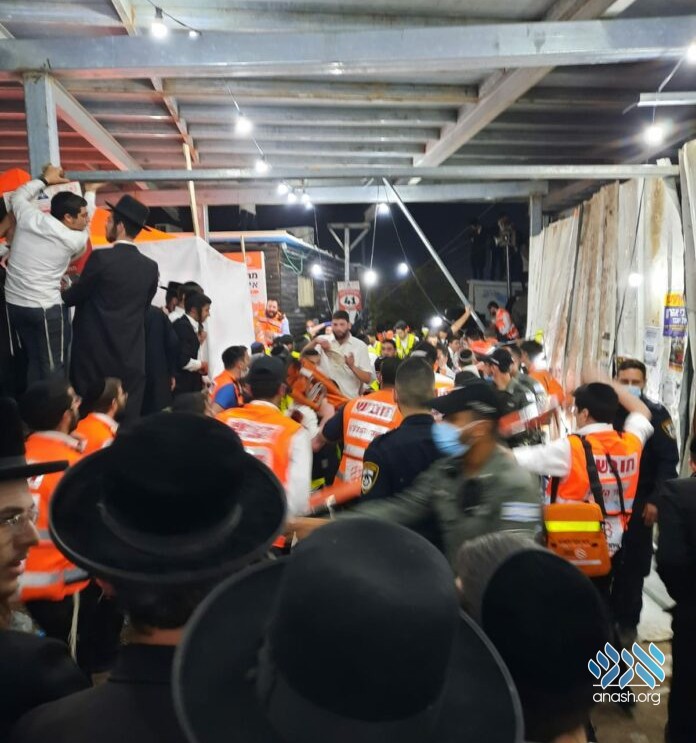 A stampede during one of the major bonfires in Meron, resulting in a mass casualty event. A massive response of emergency forces is underway.

Update: Over twenty deaths have been confirmed, and hundreds more are injured. Meron has been shut by the police, and will remain closed for the rest of Lag B’omer.

The police have now confirmed that the tragedy was cause by a stampede, and no collapse occurred.

United Hatzalah volunteers are currently responding to a collapsed structure that took place during one of the major bonfires in Meron near the Toldos Aharon bonfire resulting in a mass casualty incident.

Reports are suggesting that numerous people are unconscious and volunteers are CPR is in progress on a number of individuals who were struck by the building and lost consciousness.

United Hatzalah volunteer EMT Yosef Chaim Ben Tzion who was one of the first responders at the scene and participated in the CPR relayed: “A number of the injured are in critical condition and a large number of people were moderately injured after a grandstand collapsed with dozens of people on it. Doctors, paramedics, and EMTs from United Hatzalah who were providing medical security for the event rushed to respond and initiated CPR on a number of individuals while treating the others for their injuries.”

Due to the nature of the incident, members of the Pychotrauma and Crisis Response Unit were dispatched as well in order to deal with those who are suffering from shock and emotional stress reactions.

Editor’s Note: The videos and pictures coming out of Meron are horrific. To give proper respect to those who have passed away, those injured, and their families, we will not be posting any pictures or videos of the tragedy.