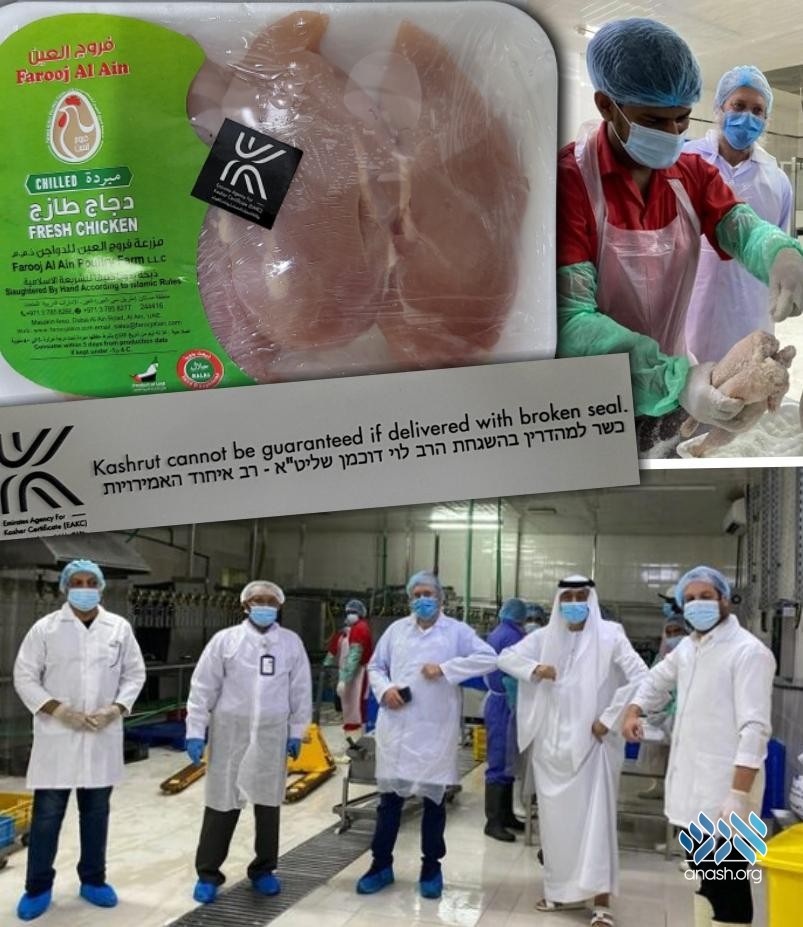 The Emirates Agency for Kosher Certification is headed by Rabbi Levi Duchman, the country’s only resident rabbi who was recently appointed as an official Chabad shliach to the country.

The Kashrus organization has been supplying kosher food to residents and tourists for many months. But with the recent influx of Israeli visitors and tourists following the historic peace deal between Israel and the UAE, the demand for kosher food skyrocketed.

In response to the increased demand, the UAE kashrus agency began certifying a number of restaurants and even held their own shechita earlier this year and a second one more recently.

Rabbi Duchman, himself a shochet, was assisted by Chabad shaliach Rabbi Menachem Mendel Chitrik, who flew in especially for that purpose from Istanbul, where he oversees kashrus supervision in Turkey, as well as by mashgichim who flew in from New York.

The local Jewish community partnered with one of the UAE’s largest chicken processing plants to provide the chickens for shechita. Emirati officials came especially to the plant to observe the process, including an Abu Dhabi health ministry official.

After the area was kashered, the staff of mashgichim from New York supervised the shechita process, the salting, and packaging with the kosher seal: “Kosher Dubai.” The meat was also certified as Halal.

As the operations began increasing and their effect felt on the entire region, the Kashrus agency was invited to join the Association of Kashrus Organizations (AKO), an umbrella kashrus group that counts some of the most well-known kashrus agencies as its members.

Other additions to the AKO include Pioneer Kosher, headed by Rabbi Shmuel Kravitsky of Amherst, MA, and Vaad Hakashrus of Pittsburgh, headed by Rabbi Yosef Itkin and Rabbi Moishe Mayir Vogel.

Established in 1985, the Association of Kashrus Organizations (AKO) unites the different kashrus agencies around the globe under one umbrella, serving the Jewish community to raise and maintain the highest level of kashrus possible. It is headed today by Rabbi Sholem Fishbane, Kashrus Administrator of the Chicago Rabbinical Council (cRc).

While the umbrella organization itself does not give any kosher certification or endorsements, its members work together to provide the kosher community with the utmost in kosher supervision. It also serves as a forum where leading authorities can discuss the numerous situations that arise in the kashrus industry.