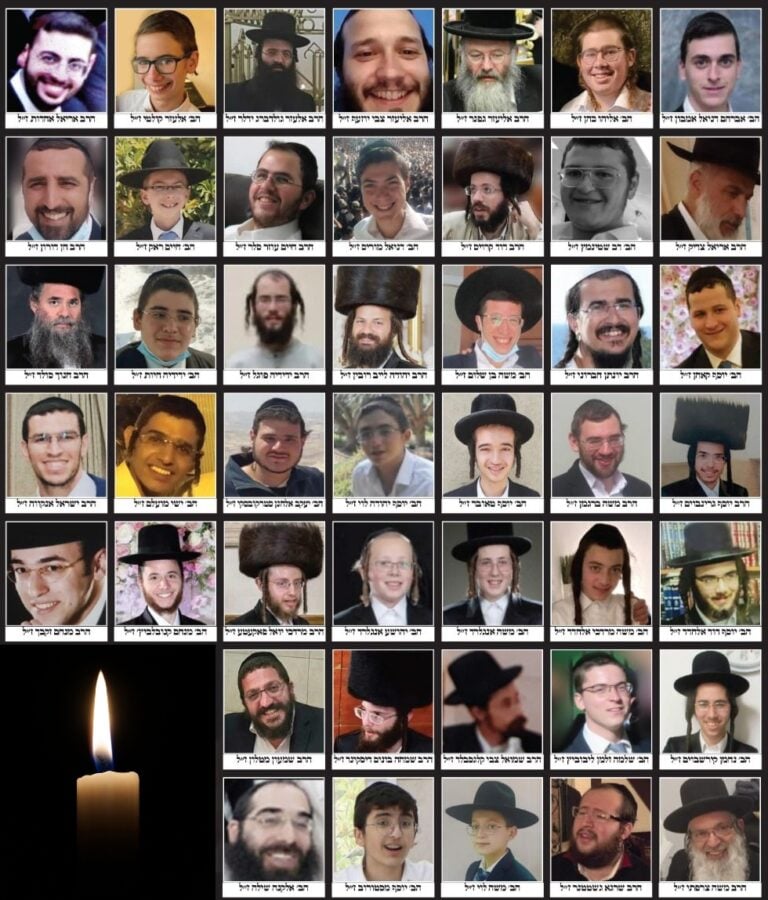 45 people were killed in the Meron tragedy on Thursday night, including at least 24 bochurim and boys, and six US citizens. The full list of victims has been released.

45 people were killed in the Meron tragedy on Thursday night, including at least 24 bochurim and boys, and six US citizens.

The victims also include two Canadians and a bochur from Argentina. Two families each lost two children. The youngest victim was nine years old.

Habachur Yossi Cohen, z’l, 21, of Cleveland, Ohio was a talmid of the Mir in Yerushalayim.

Habachur Dov Steinmetz, z’l, 21, of Montreal Canada, was a talmid of the Mir in Yerushalayim.

Habachur Yosef Amram Tauber, z’l, 19, of Monsey, who was studying at Brisk, had just arrived in Israel for the first time last week. His father, Rav Tzvi Tauber, is a Rav of a shul in Chester, New York.

Habachur Nachman Doniel (Donny) Morris, z’l, 19, of Teaneck had been studying at Yeshivas Shalavim since September. He is a graduate of the Marsha Stern Talmudic Academy in Washington Heights.

Hayeled Elazar Yitzchak Koltai, 13, lived in Passaic, New Jersey, before moving to Jerusalem with his family.

Hachasan Menachem Knoblowitz, 22, of Boro Park. He was engaged to a girl from Lakewood, New Jersey.

Shraga Gestetner, z’l, 35, a well-known singer from Montreal, Canada, was visiting Israel with his two brothers. He was buried on Friday afternoon on Har Hamenuchos.

Avraham Doniel Ambon, z’l, 21, of Argentina, was a talmid of Yeshivas Heichal Yitzchak in Jerusalem.

Israeli bochurim and children who lost their lives in the disaster include:

Hayeled Yedidya Moshe Chayut, z’l, 13, of Bnei Brak. Yedidya’s father was lightly to moderately injured in Meron but was released from the hospital to participate in his son’s levaya. His 10-year-old son was also lightly injured.

Habachur Yedidya Fogel, 22, of Jerusalem was a talmis of a hesder yeshivah in Ramat Gan.

Habachur Chaim Rock, z’l, 18, of Beit Shemesh, was a talmid of Mir Brachfeld.

Habachur Shlomo Zalman Leibowitz, z’l, 19, of Tzfat was a talmid of Yeshivas Knesses Yechezkel in Elad.

Habachur Yaakov Elchanan Strokovoski, z’l, 20, of Elad was a talmid of Yeshivas Be’er Yisrael in Jerusalem.

R’ Dovid Kraus Z”L (33) of Beit Shemesh. He is survived by his wife and nine children. He was a Toldos Aharon Chossid.

R’ Yisrael Anakvah Z”L (24) of Beit Shemesh. He is survived by his wife and two children.

R’ Shmuel Tzvi Kalgsbard Z”L (43) of Beitar. he was a Rosh Kollel in Rachmastrivka and a Magid Shiur in Yeshivas Meor Einayim.

Rabbi Chaim Ozer Seller, 24, was the father of one and a resident of the Neve Ya’akov neighborhood of Jerusalem. He was a graduate of the Ponevezh Yeshiva.