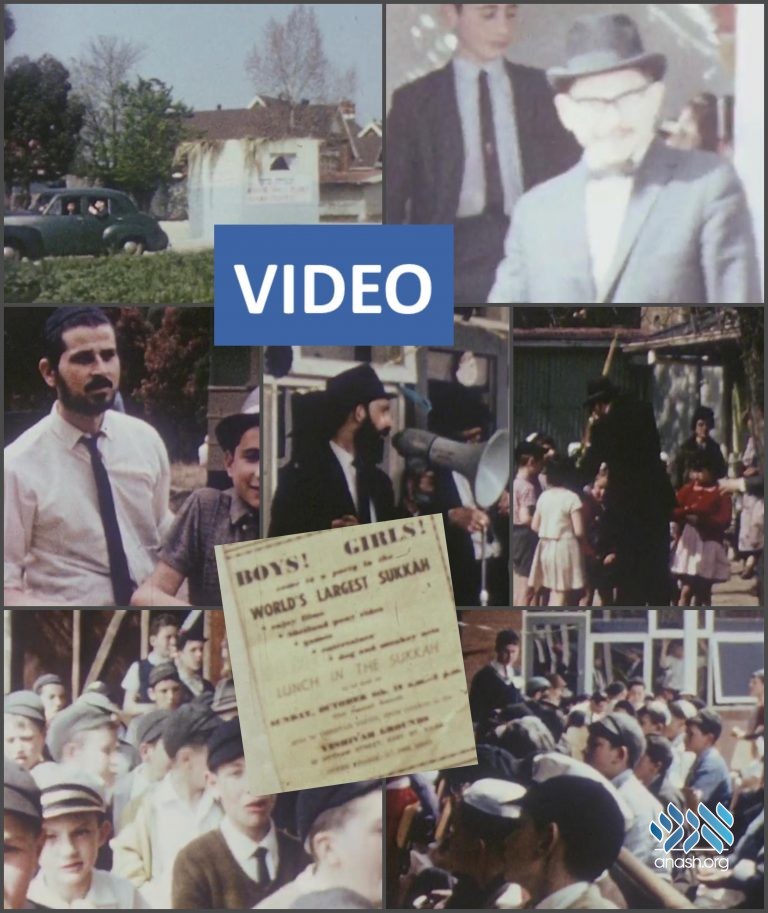 Watch: A recently discovered historic film taken in 1963 in Melbourne, Australia, documents events organized by Rabbi Sholom Gutnick a”h whose second yahrtzeit is this week – on the 25 of Iyar.

A recently discovered historic film taken in 1963 in Melbourne, Australia, documents events organized by Rabbi Sholom Gutnick a”h whose second yahrtzeit is this week – on the 25 of Iyar.

“The World’s Largest Sukkah,” on the grounds of the Yeshivah Centre, was a major sensational project of Tzeirei Agudas Chabad, which was then called “Yeshivah Youth,” and Bnos Chabad. Seen talking to the children is Rabbi Shmuel Gurevitch who together with Uri Kaploun ran the yeshivah youth organization is seen.

This was during Chol HaMoed Sukkos, 5724, late 1963 — years before the internet, cell-phones, and social media. Nevertheless, hundreds of boys and girls were alerted, and they streamed in from all over Melbourne to join in the excitement. You can see how enthused they were when they discovered that they were being photographed by a video camera.

In the course of the program, side-by-side with all kinds of attractions and activities, every boy and girl enjoyed lunch in the huge sukkah at the Yeshivah College at 92 Hotham street and joined in all the relevant brachos – many for the first time. And, of course, each took his or her turn at saying a berachah over a lulav and esrog. Reb Abba Pliskin showed them, one by one, what to do, and said the berachah with each of them.

His command of English at the time was not that great. Nevertheless, several years after one of those little boys had enjoyed those hours in the World’s Largest Sukkah, he arrived at the Yeshivah Centre one day and asked to be taught for his bar-mitzvah by “the little rabbi with the long beard…”

The first Sukka mobile in Melbourne was organized in 1963 by Rabbi Sholom Gutnick who can be seen with his nephew R. Mottle Gutnick.

Rabbi Sholom Gutnick drove the Sukkah mobile attached to his car to the schools and various locations around Melbourne. As the Rabbi of the largest shul in Melbourne, a dayan in the Beis Din, and teacher at the Yeshivah – he was a Chosid at heart and found the time to help with Yeshivah Youth activities.

As the Sukkah mobile made its way through the streets of Melbourne, the jaws of thousands of onlookers dropped in amazement. In addition, the principals of several non-Jewish schools were asked in advance to allow a lunchtime visit by the Sukkahmobile, which would enable their many hundreds of Jewish pupils to fulfill the season’s religious obligations, and they were most co-operative.

Every boy and girl made a berachah over a lulav and esrog, took a seat in the sukkah for a minute or two, said a berachah over a cookie plus a Leisheiv BaSukkah, and stepped out with a big smile. One headmistress was so touched at the sight that she asked if she, too, could be allowed to take a seat in the sukkah. Each child was also given an explanatory page, prepared for various age-groups, to take home and share the experience with his family.

This video also documents Camp Gan Yisroel in the Basen.

Seen is Rabbi Binyomin Klien who later become one of the Rebbe’s secretaries who was sent at the end of 1961 on Merkos Shlichus for three years together with his wife Leah. He was involved in strengthening  Yiddishkeit the community at large and especially with  the youth programs.

In 1962, he received a letter from the Rebbes secretary Rabbi Chadakov encouraging him to be involved in Lubavitch youth in Australia. He traveled to different states around Australia and also New Zealand were he strengthening Yiddishkeit and also distributed Kehos books including Talks and Tales. He gave many shiurim and he even accomplished that they should teach more Jewish studies in the mostly secular Mt Scopus school. Mrs. Klien taught in Beis Rivka and was involved in the operation of mesibos Shabbos.

Seen is the young boy Sholom Ber Groner, now a shliach in South Africa, and Shaya Kantor, grandson of Moshe Zalmen Feiglin, the first Lubavitcher chossid to settle in Australia

Seen with his orange beard is Uri Kaploun who ran the Yeshivah Youth in the early years of its establishment and was a teacher in the Yeshivah College.

Seen is Rabbi Chaim Gutnick, a distinguished Rabbi in Melbourne who came to visit the Camp Gan Yisroel enjoying a game of cricket at with the boys.