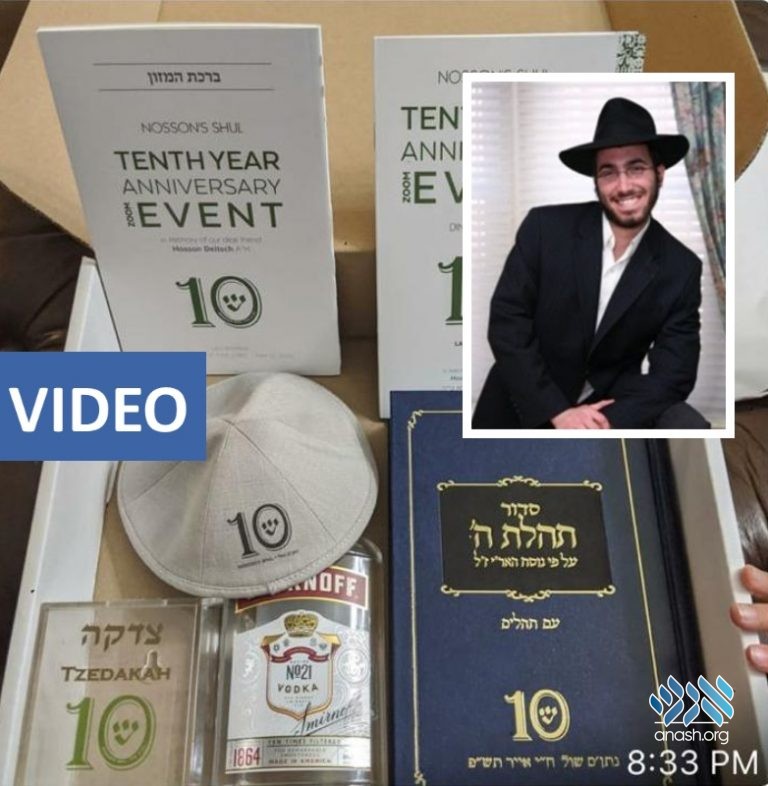 Hundreds of people gathered online to mark the 10th yartzeit of Nosson Deitsch A”H, connecting a community that strives to follow in his footsteps.

This Lag Baomer, Nosson’s Shul celebrated its 10th anniversary, marking a decade since the yartzeit of its namesake Nosson Deitsch A”H.

What started out as a group of single friends who decided to create a shul in Nosson’s memory, has flourished into a thriving community that strives to live by the values that Nosson exemplified – genuine love for a fellow Jew and infectious enthusiasm for Torah.

The shul grew in leaps and bounds over the past decade, as its membership increased rapidly. The community celebrated two hachnasos Sifrei Torah, expanded programs for women and children, and racked up an impressive list of ongoing classes and events.

As preparations were underway for the Shul’s 10th Gala Dinner, Covid-19 showed up, and organizers realized that the community would need to celebrate virtually.

“The idea was for everyone to come prepared,” Shul Rabbi Chaim Yisroel Wilhelm told Anash.org, and so, with the help of the organizing committee, every community member received a siddur, yarmulka and pushka personalized with the dinner’s logo.

An incredible 200 people joined the event over Zoom, bearing witness to how many people and households have been affected by the shul’s leadership, community and namesake.

Nosson’s brothers Nechemia and Chezzie Deitsch shared memories and inspiration followed by Mendy Wilhelm (Shul President) and Mulle Shechter who described Nosson’s personality and the uniqueness of a community deeply committed to helping each other.

The evening’s guest speaker Rabbi YY Jacobson shared an unforgettable message about forgiving and moving on: During the shiva, Mrs Cyrel Deitsch turned to the young man with whom her son had been in the fatal accident, and made it clear that she held no grudge against him. “It was the hand of Hashem,” she told him, with unparalleled strength. “I know how much you love my son.”

With her words, Rabbi Jacobson continued, the grieving mother granted techias hameisim to this bochur who believed himself to be at fault, and would probably have lived his life crushed by the burden.

“It was a beautiful message for all of us to hear on Lag Baomer,” Rabbi Wilhelm said. “Hinei matov umanaim sheves achim gam yachad!”

Rabbi Jacobson praised the community which follows Nosson’s example of remarkable Ahavas Yisrael. “When you have to disagree with another, it doesn’t mean you can’t look him in the eye,” he remarked. “You can still learn with each other, talk with each other – that’s the way a community has to work!” Indeed, he said, even the fact that the shul is run by brothers is an uncommon feature and a special display of unity.

Marks of appreciation were bestowed upon the shul’s event and kiddush co-ordinator Yankel Ezagui, and shamash Getzy Goldstein, who received gifts of personalized challah dekels and sifrei Pirkei Avos.

As the evening progressed, the celebration morphed into a farbrengen that drew to a close at 4 AM!

“That was the maala of Zoom!” Rabbi Wilhelm pointed out. “We didn’t need only people from Brooklyn to join. All people – friends and shluchim who live over the world could join, from Alabama, Florida, the Cayman Islands and even Australia!”

B’ezras Hashem, the accomplishments of the past 10 years will be the harbinger of another decade of a community living life the way Nosson Deitsch would have lived his own.