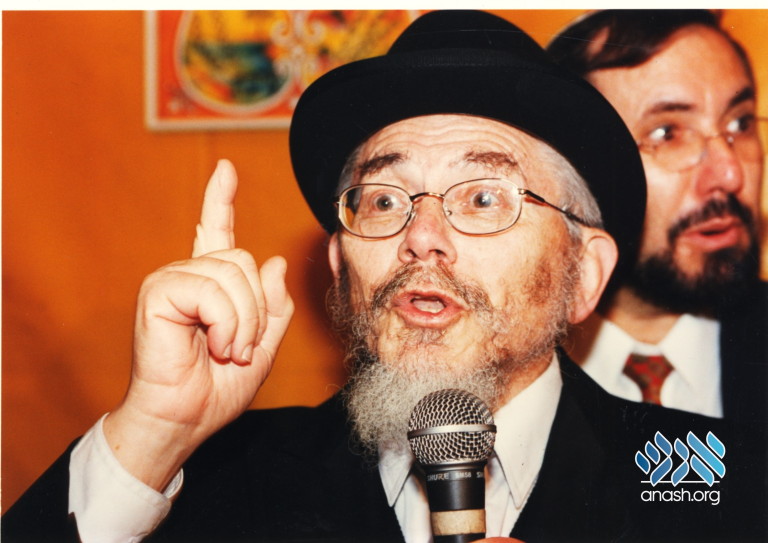 Born in Russia in 5684/1924, Rabbi Gutnick was 3 years old when his family emigrated to Eretz Yisroel. One year later the family was sent by the Frierdiker Rebbe to London, England, where his father Rabbi Mordechai Zev Hakohen Gutnick, a tomim of Lubavitch, served as a shliach until his passing in 5691/1931, at the age of 35. Mrs. Gutnick later married Rabbi Osher Abramson, who later served as Av Beis Din of Sydney, Australia.

Following World War II, in 1946, he took up the position as a maggid shiur at the Yeshiva in Montreux, Switzerland. A year later, upon returning to London in 1947, Rabbi Gutnick was appointed as the Rabbi of the Chevra Shas Shul in London’s East End. He gave many lectures and Torah classes to students and working folk.

In 1948 he traveled with his mother and stepfather Rabbi Osher Abramson to New York. During a yechidus with the Frierdiker Rebbe, he was instructed to travel to Australia to spread Yiddishkeit there. Immediately, he traveled to Sydney, where he began giving Gemara shiurim and lectures to young professionals. At the same time, he enrolled in the Sydney University where he gained his Bachelor of Arts Degree in Philosophy.

The Rebbe encouraged him to write chiddushei Torah and instructed him to speak at the kinnus Torah in New York.

In 5712/1952, he married Devorah Feiglin, a”h and they settled in Melbourne, where he became one of the most influential Rabbis in Australia. He was appointed Chief Rabbi of Caulfield Hebrew Congregation, a haven for European Jewry after the war. Together, he and his rebbetzin were instrumental in growing what would become the largest shul in Australia. The shul was later renamed ‘Ahavas Sholom’ in honor of their beloved Rabbi. He served there for over 43 years, nurturing and growing one of the largest shul memberships in Australia.

Rabbi Gutnick played a big role in the establishment of after school chadorim for children attending public schools, as well as youth clubs and Sunday morning tefillin clubs. He launched the Caulfield Shul ‘Kollel Tiferes Zekainim’, where he taught Torah to retirees for three hours each weekday. He participated in thousands of Jewish life cycle events celebrated by members of the Australian Jewish Community.

In 1968, the Yeshiva Gedolah – Rabbinical College – of Melbourne was established, and the Rebbe requested of Rabbi Gutnick that he involve himself in growing and strengthening the then small Yeshivah Gedolah. He was one of the first Roshei Yeshivah appointed to teach there; to this day, many students recall his shiurim with great clarity. The Rebbe once wrote to him that his neshama’s shlichus was to be involved in that yeshivah, where he taught for over 50 years.

The Rebbe showed Rabbi Gutnick many kiruvim. in 5729/1969, prior to an extended trip to Europe and Eretz Yisroel, he had a yechidus with the Rebbe. During the yechidus, the Rebbe asked him to serve as his ambassador to Antwerp, Italy, France and Eretz Yisroel, and to speak to and encourage the Chabad shluchim there.

Rabbi Gutnick was an extremely gifted orator, and was known to always uplift others around him. He was active in all aspects of Jewish growth throughout Australia, traveling to various communities in Australia and Tasmania to spread Yiddishkeit.